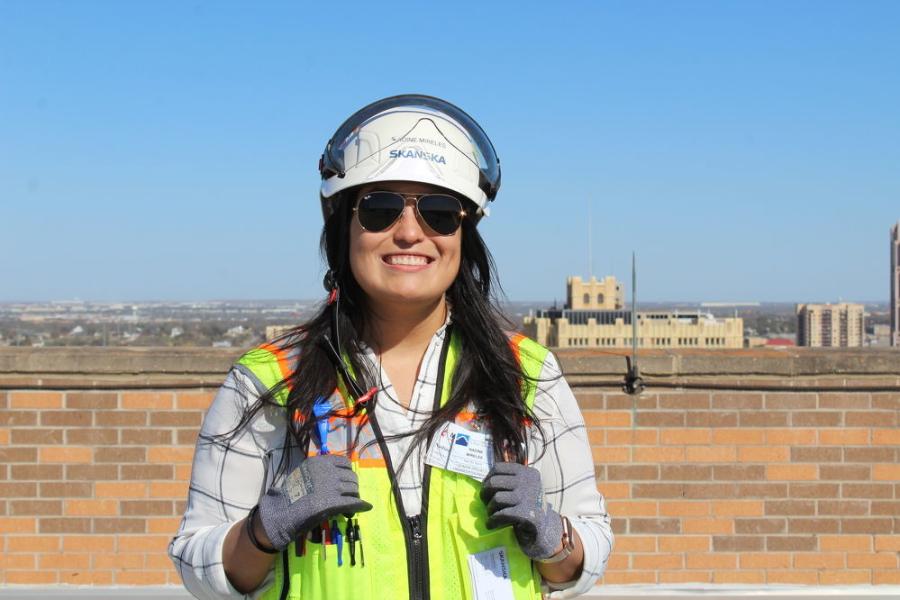 Sometimes it's the littlest of things that make the biggest impact.

Such was the case when a giant in the construction industry gave away T-shirts to students at a San Antonio trade school in 2010.

Nadine Mireles was a 15-year-old freshman at Construction Careers Academy (CCA) when Skanska made a presentation to her class and gave each student a T-shirt with the company logo.

"I knew right then that I wanted to work for Skanska. I honestly believe that shirt is the reason I'm at Skanska now," said Mireles, who is the assistant project manager in charge of special projects for the company.

Of course, Mireles would not have the shirt had she not opted to attend a trade school specializing in her field of choice.

"I recommend the trade school route for anyone who wants to enter the industry," Mireles said. "My first few years at Texas A&M felt like review from my trade school classes. I was ahead of the game."

After Construction Careers Academy and A&M, where she earned her degree in Construction Science, Mireles interned at Skanska before landing a full-time job.

"From the get-go, especially after meeting the people, I knew this company must have done something right," she said. "As an intern, I became aware of their core values. I learned that they take care of their people, and just as importantly, their customers. I learned how technologically advanced they are as a company. They are true innovators, and I wanted to be a part of it."

Women have been instrumental in her career journey, Mireles said, dating all the way back to her days at CCA.

"The people teaching me in high school were women," Mireles stated. "They were estimators prior to being educators, so they knew the business. From the very beginning, I knew that women could be an important part of the construction industry."

Today, Mireles is giving back through the Architecture, Construction and Engineering (ACE) mentoring program at Skanska.

"Since I'm on the younger side, I frequently work with the younger age group, since it is easy to relate to them," she said. "Most of my mentees are young girls.

"One challenge was being so young when I started," she said. "I was a 20-year-old trying to manage men that had done this forever. I questioned myself a little. What could I possibly add or teach? I learned how important advanced research was and that allowed me to know what I was doing on the project."

Mireles is primarily responsible for small scale Skanska projects at the San Antonio regional office. Institutional renovations like the one made necessary at St. Phillip's College following the ice storm of 2021 are typically assigned to her. She also manages many of Skanska's in-house projects.

Still in her 20s, we asked Mireles where she wanted to be in the industry in five years.

"I'm going to park it here at Skanska," she replied. "This is my dream job. This is something that I love. I've never had a day when I wake up and do not want to go to work."

To other women thinking that construction might give them a similar sense of pride and satisfaction, Mireles offers, "Do it. There are so many more women making it in the industry today. Get out there. Try it out. Go to a trade school. If I can be successful at it, so can you. Do not be afraid. I'm a living testament that you can do it. And if you are older, this is your time. Go for it."

Twelve years after a T-shirt ignited a young girl's interest in a company and a career, she is still exhilarated by the industry.

"Every day is like a highlight film," she said. "Nothing is more satisfying than seeing a project through to its fruition and witnessing the excitement it brings to the client." CEG