Preliminary analysis of the ancient elephant bones suggest that the creature lived at least 10,000 years ago, during the last Ice Age. 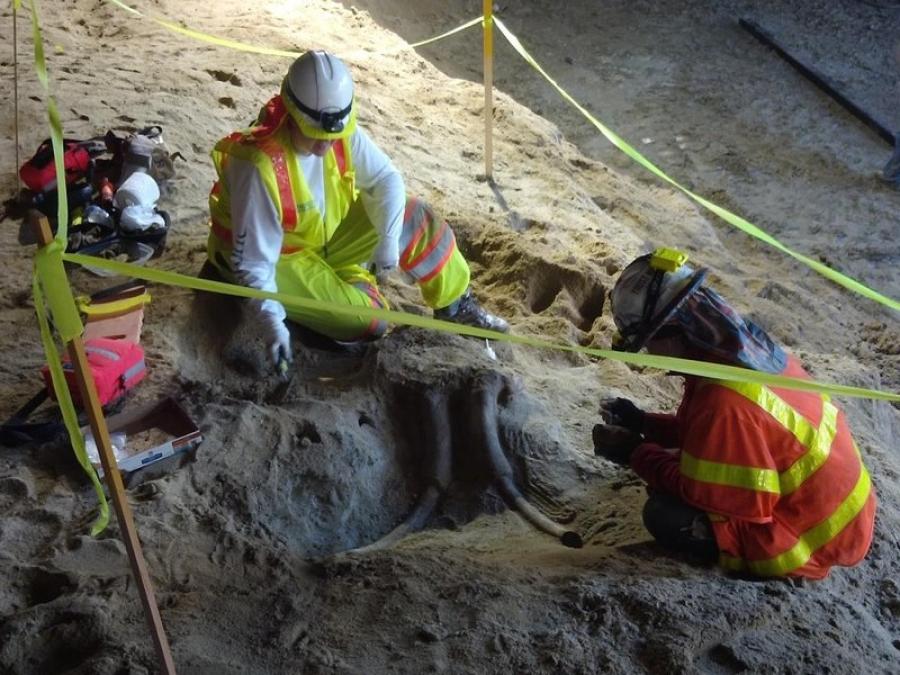 A partial skull of an ancient elephant uncovered in a new L.A. Metro station.

Ten thousand years ago, the land where Los Angeles now stands was blanketed with tar pits, snagging all sorts of unsuspecting creatures and entombing them in its gooey depths. So it didn't come as too big of a surprise when construction workers at the site of L.A. Subway's future Wilshire/La Brea Station came across fragments from an ancient elephant, Brittny Mejia reports for the Los Angeles Times.

Considering how well known the La Brea Tar Pits are, the crew was prepared for the possibility of uncovering prehistoric creatures. Just after Thanksgiving, the team found a set of teeth belonging to an adult mastodon, prompting officials to call a paleontological monitor to watch for other creature remains. Shortly thereafter, the monitor uncovered a partial skull with tusks from not far away from where the first specimens were found, Sarah Laskow reports for Atlas Obscura.

“When such finds are made, construction work is immediately stopped in the area until the fossils can be preserved and removed,” Metro spokesman Dave Sotero wrote in a statement

Preliminary analysis of the ancient elephant bones suggest that the creature lived at least 10,000 years ago, during the last Ice Age. But while the first set of teeth fragments the workers uncovered appear to be from a mastodon, it's unclear whether the second set of fossils belonged to a mastodon or a young mammoth, Hudson Hongo writes for Gizmodo.

“Both the tusk section and skull have been encased in plaster—similar to that used in making casts for humans—in order to be removed from the site intact and taken to a lab for further analysis,” Sotero writes. “An analysis of the teeth and other features of the skull will tell whether the animal was a mammoth or mastodon.”

A tusk uncovered during construction on the Metro. (Metro)

Both beasts were distant cousins of the modern elephants, but they are not one and the same. Mammoths were much larger than mastodons and had tall, ridged teeth that could stand up to the wear and tear of eating tough plains grasses. Mastodons, on the other hand, tended to stick to the forests and snacked on fruit and leaves, Sotero writes. Both species went extinct at about the same time, around 10,000 years ago.

Though these were the first fossil findings during the Metro's expansion, they are unlikely to the be last. When the subway system's Red Line was being built in the 1980s, workers uncovered thousands of fossil specimens, and funding for retrieving them safely has been worked into the current budget. After all, what could be better than discoveries of the remains of prehistoric creatures as well as a modern public transit system?