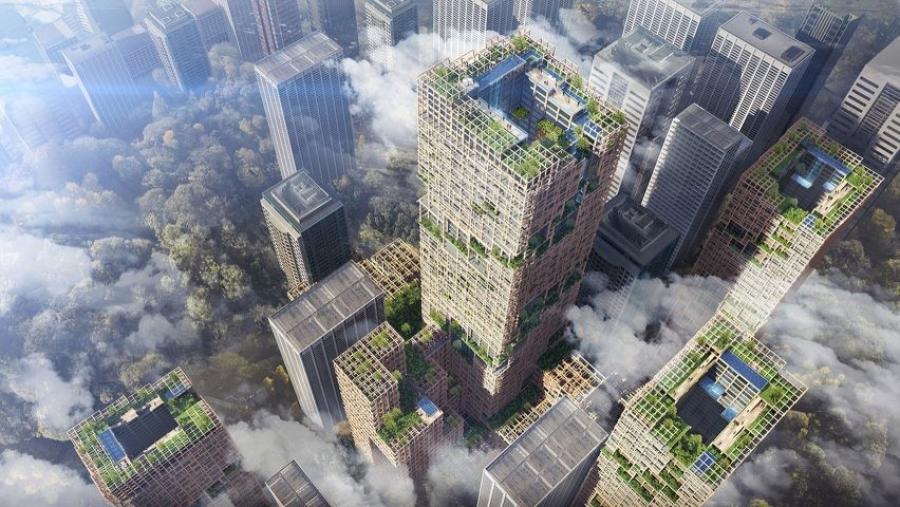 According to the company, its goal is to create cities that are environmentally conscious and use timber, allowing them to “become forests through increased use of wooden architecture for high-rise buildings.”

According to the company, its goal is to create cities that are environmentally conscious and use timber, allowing them to “become forests through increased use of wooden architecture for high-rise buildings.”

Sumitomo created the concept of W350 at the Tsukuba Research Institute, its research and development facility, the South China Morning Post reported. According to Sumitomo, the institute is paying close attention to the “expanding possibilities for wooden buildings as a road map for future technology, such as the development of building methods, environmentally-friendly technologies and trees that become resources and building materials.”

Sumitomo said that despite the fact that forests occupy about two thirds of Japan's land, “the self-supply rate for domestically-produced timber is only at around 30 percent,” the South China Morning Post reported. What's more, the country's forests are now at risk because they haven't been maintained properly.

"Although the large amounts of Japanese cedar and Japanese cypress planted after the Second World War have now reached the time for harvesting, they are being left in an un-maintained state as devastation of our domestic forests continues,” said Sumitomo. “It is crucial to use these trees and replant them after harvesting to encourage sustainability of forests."

Sumitomo has been in the timber business since 1691, and said this building will help celebrate its 350th anniversary in 2041, the South China Morning Post reported.

The project will use 185,000 cubic meters of timber, and will cost about $5.6 billion—twice the price of what a typical skyscraper would cost, the South China Morning Post reported. But Sumitomo said it anticipates the cost coming down once timber becomes a more commonly used material for projects like this.

“Going forward, the economic feasibility of the project will be enhanced by reducing costs through technological development,” Sumitomo said.

The building will feature elements of nature, including foliage stretching from the ground floors all the way up to the top of the structure, which Sumitomo said will provide “a view of biodiversity in an urban setting,” the South China Morning Post reported. In addition, balconies will populate all four of the building's sides to provide areas where “people can enjoy fresh outside air, rich natural elements and sunshine filtering through foliage,” Sumitomo said.

The building will utilize a structural system made up of braced tubes, beams and braces to help it stand up to earthquakes and wind, Sumitomo said.

When complete, the skyscraper will rise 70 stories high in Tokyo, and will be home to stores, offices, hotels and homes.