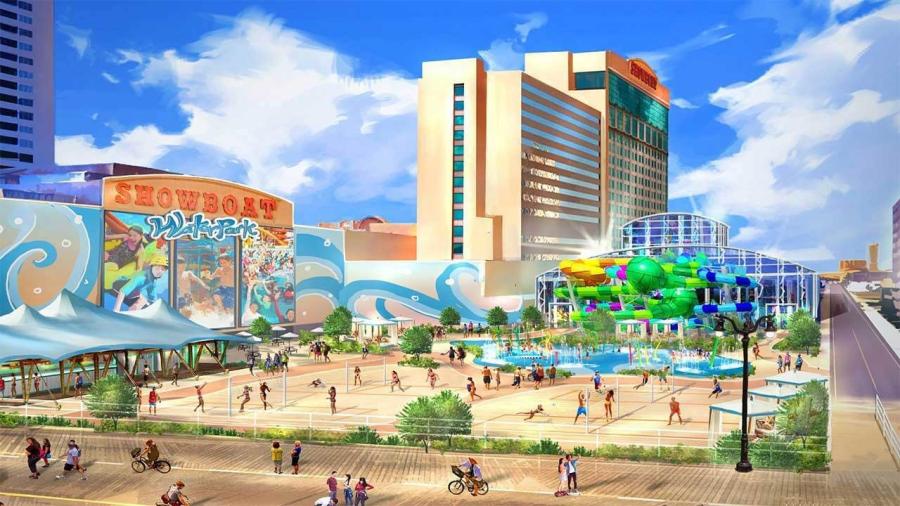 A world-class Atlantic City development dubbed the largest beachfront indoor waterpark in the world has officially begun to rise and could be the latest indicator that New Jersey's gambling mecca is a city on the way back.

On Jan. 12, Philadelphia-based Tower Investments held a ceremonial groundbreaking just off Atlantic City's iconic boardwalk to mark the beginning of construction on Island Waterpark. The company, owned by Bart Blatstein, acquired the Showboat for a reported $23 million back in 2016 and quickly began buying land just north of the hotel.

Jersey Digs was the first news outlet to reveal renderings and substantial details about the project in June 2020. The waterpark eventually gained approvals from the Casino Reinvestment Development Authority in December of that year.

A new rendering released by Tower Investments before the groundbreaking shows a waterfall feature, and Blatstein revealed a few new amenities about the project during a speech at the ceremony. He said the future waterpark will include an indoor boardwalk with games, plus a 10,000-sq.-ft. "adults-only area" that serves alcoholic beverages.

In addition, an outdoor lazy river will run just west of the indoor portion, while the eastern section of the property is to feature outdoor volleyball courts, an enclosed water slide and a bar facility facing the Atlantic Ocean.

Island Waterpark will be connected to the Showboat's Premier Lite tower, which will undergo a complete renovation as part of the project. The waterpark also will link up to the nearby Lucky Snake Arcade, which spans 60,000 sq. ft. and offers more than 300 games. That facility, which includes a sports bar with a boxing ring, an e-sports gaming area, live entertainment venues and a speakeasy, opened last May.

Erie, Pa.-based American Resort Management will be overseeing all aspects of the waterpark's development. The company operates various hospitality facilities around the country including Epic Waters Indoor Waterpark in Grand Prairie, Texas, and Parrot Island Waterpark in Fort Smith, Ark.

Blatstein said during the ceremony that construction on Island Waterpark is expected to last about 16 months. While no official timeline has been released, the facility aims to open to the public sometime during 2023.

Atlantic City's development scene has recently heated up despite the COVID-19 pandemic. Institutions like Stockton University have constructed new student housing, and projects ranging from boutique hotels to historic restorations have emerged. 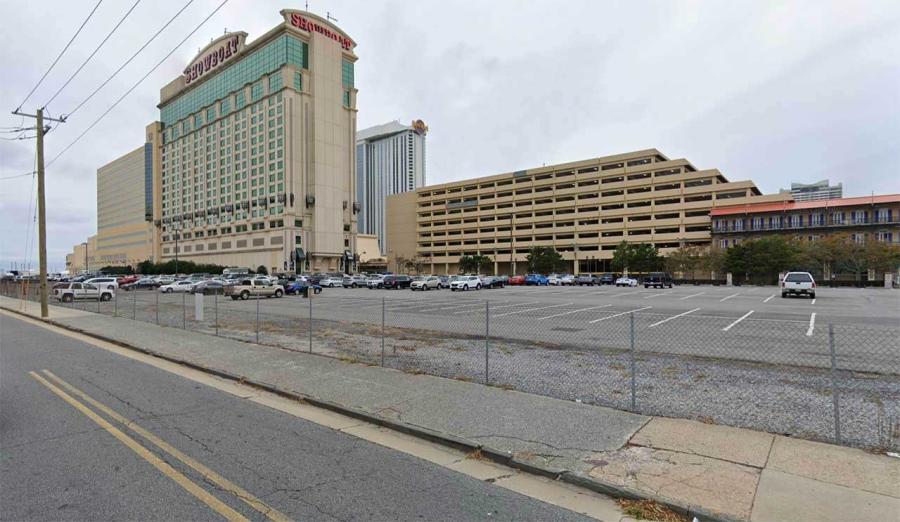 Island Waterpark will be connected to the Showboat's Premier Lite tower, which will undergo a complete renovation as part of the project. (Google Maps/Street View image)

During his speech at the groundbreaking, Blatstein said that he is aware some critics think he is moving too slowly in redeveloping the properties he owns in the city.

"What we do is transformational development," he noted. "We put in place a plan ... to patiently bring it about."

He added that taking time has been a successful strategy for both him and his Tower Investments.

That is the approach they took when his company transformed the Northern Liberties section of Philadelphia from a rundown area into a popular place for trendy clubs, restaurants and housing that attracted a young clientele, he said.

Blatstein was hailed as something of a savior when he bought The Pier at Caesars Atlantic City and turned it into the Playground in 2015, then Showboat in 2016, and Garden Pier and other properties in the area around Showboat in 2017.

Others might consider the groundbreaking of the indoor waterpark to be premature, reported the Press of Atlantic City.

Blatstein is counting on the sale of up to $97 million in tax-exempt municipal bonds handled by the Atlantic County Improvement Authority to fund the construction — bonds that have not yet sold.

"My understanding is they are going out to market within the next couple of weeks," said Improvement Authority Executive Director John Lamey at Jan. 13's board meeting.

While another developer in recent years frustrated many local officials with outlandish plans for a separate hotel in Atlantic City, Blatstein, by contrast, came to town well known as a Philadelphia redeveloper who got results.