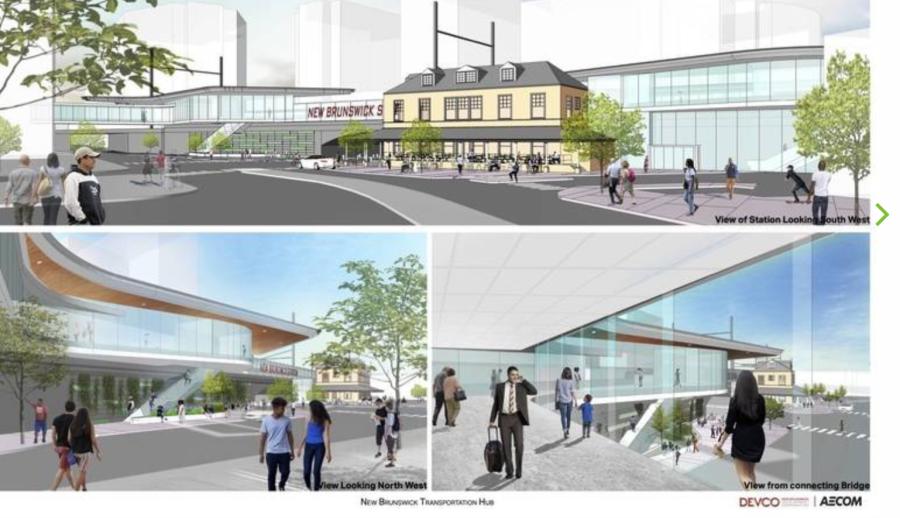 A plan to use $49 million in state money to renovate and modernize the New Brunswick Train Station was unveiled. (Image courtesy of DEVCO)

Mayor Jim Cahill of New Brunswick, N.J., was thanking Gov. Phil Murphy and others on Sept. 23 for planning to invest $49 million for the modernization and expansion of his city's train station when he was interrupted by the whoosh of a passing commuter train.

"Well-cued," Cahill said, with a laugh.

The same thing could be said about the planned renovations considering that more than a billion dollars of nearby development projects are moving ahead faster than a locomotive and will likely bring thousands of new commuters to the city one day soon.

TAPinto New Brunswick reported that the train station upgrades, unveiled near the future site of the New Jersey Innovation and Technology Hub — known as "The Hub" — are to include extending and replacing well-worn passenger platforms and rehabbing bulky escalators and elevators.

The state funds also will go toward installing brighter and more energy-efficient lighting, upgrading heating and air conditioning systems, and making other improvements to the building, both internal and external, the community online news service noted.

Located at a critical point on NJ Transit's Northeast Corridor rail line, the significant investment in local economic development and passenger experience is just one piece of the $814 million the fiscal year 2023 state budget agreement is dedicating to rail station improvements through the Debt Defeasance and Prevention Fund.

The Middlesex County Improvement Authority (MCIA) plans to oversee the design, renovation, and construction of the station on behalf of the county and NJ Transit. In addition, the latter will provide technical assistance, procure and manage an engineering and design firm, retain construction services, and have review and approval rights throughout the project.

MCIA is currently preparing the scope for the project, TAPinto Brunswick noted, which will focus on enhancements to the station and customer experience.

Old Station to Keep in Step With Neighborhood

For a train station built in 1903, when, as Murphy pointed out, Teddy Roosevelt was in the White House, it is about time that amenities and upgrades were to improve the passenger experience at the New Brunswick station.

Overall, the terminal is in good shape considering its age, MCIA officials told Tapinto New Brunswick, but the time for a facelift is now, especially with the $665 million technology hub to be built across the street. The first phase of that project, which will include a 12-story, 560,000-sq.-ft. building filled with some of the region's best academic and business minds, was approved by New Brunswick's Planning Board in July.

Nearby, too, crews are building the Jack and Sheryl Morris Cancer Center, New Jersey's first freestanding cancer hospital. The $750 million, care and research center will encompass 12-stories and 519,000-sq.-ft. of space.

"You've recognized the potential of the New Jersey Innovation and Technology Hub and the importance of its central location here right in the heart of New Jersey, directly across from the city's train station on the most traveled rail line in the entire United States," Cahill said at the gathering of politicians and area leaders for the project's announcement.

"This is the next step in the New Brunswick renaissance," Coughlin added. "When I grew up in Middlesex County, New Brunswick didn't have the greatest reputation. The truth of the matter is that's totally different now. All you need to do is walk around New Brunswick to appreciate all the great things that have happened."