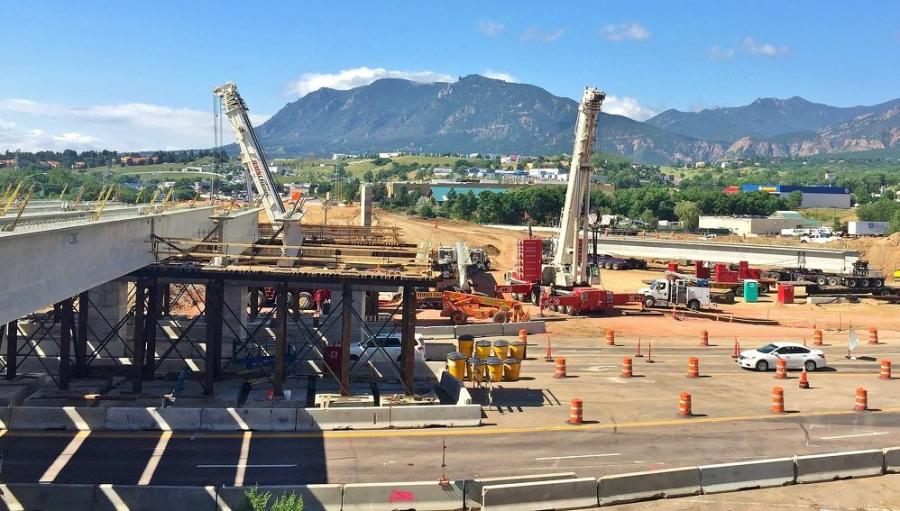 A $113.1 million design-build project will streamline a major interchange — Interstate 25 at Cimarron Street (U.S. 24) — referred to as the gateway to Colorado Springs. (CDOT photo)

A $113.1 million design-build project will streamline a major interchange — Interstate 25 at Cimarron Street (U.S. 24) — referred to as the gateway to Colorado Springs.

Only the Colorado Springs Metropolitan Project of 2004-2008 was larger.

That project upgraded the I-25 corridor through Colorado Springs to a 12-mi. six-lane highway including complete reconstruction of two major interchanges and 17 new bridges.

CDOT worked in partnership with the Federal Highway Administration, the city of Colorado Springs, El Paso County and the local community in developing plans for the interchange.

“The goals remain a critical part of our communication efforts throughout the project implementation,” said Dave Watt, CDOT project director.

The reconstruction project kicked off in June 2015 and expected to wrap up in December. Crews are transforming the decades-old existing structure into a more efficient and attractive interchange.

It is a key local and regional interchange that serves as a primary connection to downtown Colorado Springs as well as neighborhoods and mountain communities to the west.

Contractor for the project is Kraemer North America of Plain, Wis. The company has regional offices in Minnesota and Colorado.

In 2014, Kraemer joined the Obayashi global family of companies. The strategic partnership has allowed Kraemer to participate in a greater number of projects, including larger scale civil works projects in Kraemer's core areas and in new areas across the United States. The company was selected through a best-value process used for design-build contractors.

Kraemer worked with Tsiouvaras Simmons Holderness (TSH) of Greenwood Village, Colo. on design for the project. TSH is a design firm founded in 2015 to serve the Colorado transportation industry.

Colorado Department of Transportation is the project manager and project owner. It is supported by Wilson & Company of Albuquerque, N.M., which provides project management and quality assurance support.

The design-build project includes reconstruction of the I-25 interchange between Colorado Avenue on the north and Nevada Avenue-Tejon Street interchanges on the south. Plans call for improved highway alignment and improved ramps as well as construction of acceleration and deceleration lanes.

In addition to the changes and additions, the roadway surface in the intersection area will be improved to reduce dips and bumps.

Summer of 2017 kicked off with landscaping and aesthetics projects and installation of metal barriers, lighting systems and conduit. Workers are striping the highway, installing islands, median curbs and quadrant roadways and will complete remaining trails and stream improvements.

Phase 2 was completed earlier this summer. As part of Phase 2 construction, the single point urban interchange configuration under I-24 at U.S. 24 (Cimarron Street) became operational June 23 of this year.

The new interchange is designed to enhance operations, correct existing safety and design deficiencies and serve long-term travel demand in the area.

Night work helps minimize inconvenience to the travelling public and the community, said Michelle Peulen, CDOT communications manager, Region 2. “There are very few neighborhoods near the project site so there is relatively minor impact to residents,” she said.

Operators have been busy with excavators, loaders, forklifts, man-lifts, bulldozers and pavers.

Cranes played an important role in the project: an 80-ton crane was in use as well as larger 100-ton to 500-ton cranes that were used during initial phases of the project.

Crews will have poured an estimated total of 32,000 cu. yds. of concrete for highway and bridge work over the course of the project, and will have placed about 33,000 tons of permanent asphalt. Some 350,000 cu. yds. of dirt had to be brought in to realign, elevate and stabilize the roadways in the project area.

Project goals were established and approved by the Executive Oversight Committee in November 2013.

They include: maximizing overall safety, capacity and operation of the interchange and the surrounding transportation network within the project budget; minimizing impacts and inconvenience to the community, motorists, businesses, downtown and the public during construction; and achieving an aesthetically pleasing design compatible with current and future amenities and enhancements in and around the interchange.

Finishing the project by December of this year was another major goal.

The project is one of the first in Colorado to use the “Project First” approach. As part of Project First, CDOT works to improve how partnering between the project owner team and the contractor team can better serve Colorado's transportation projects for the benefit of the project and the travelling public.

The interstate is the only major route into the Rocky Mountains for nearly 50 mi. north and south of Colorado Springs. It serves a growing number of local commuters and long-distance travelers.

The improvements are designed to enhance operations, correct existing safety and design deficiencies and serve the anticipated short-term and long-term travel demand in the area.