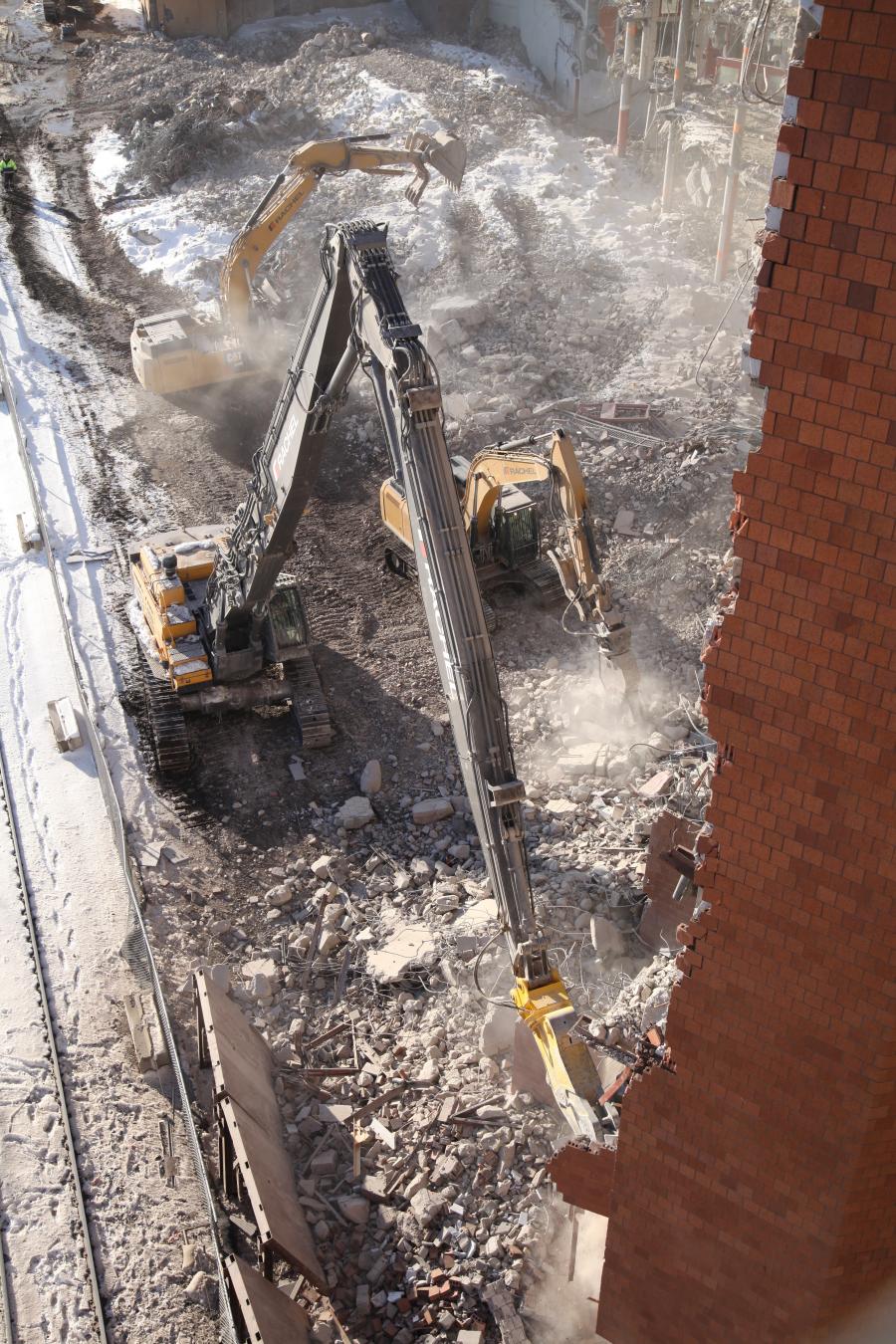 With roots dating back to the late 19th century, the bluff dwellings of St. Paul, Minn., overlooking the Mississippi River are now being demolished. Constructed at the face of a 100 ft. (30 m) bluff, they descended 10 stories to the river from the downtown business, commercial and entertainment district of the city.

County employees left their home on the bluff in 2013 and the jail was closed in 2003. Both moved for the same reasons; larger and more efficient facilities.

Originally, county officials had hoped to sell the buildings and site to a developer. However, developers shied away because of the characteristics and age of the buildings.

“The complicated and varying structural designs and systems throughout the buildings are literally too antiquated to modernize to a standard of function and efficiency as required by ADA law, building code and the public's expectation for environmentally friendly and economically efficient operation.

“The development community made it clear they could not find enough assurance of a positive return on investment in order to make re-use of the existing structures plausible in a new age of commercial development,” said James Homolka, Ramsey County senior project manager.

When the demolition and new wall are completed, county officials are optimistic that the investment made to demolish the buildings will be a good one.

“For the county and the city of St. Paul, it's a hugely important project socially and economically. I know people have a lot of interest given the size of the structures and potential for the site with its location in the heart of downtown and on the river front,” Homolka said.

Strung out along the bluff line for three city blocks, this hodge-podge of structures started rising from the river flats at the face of the bluff in 1886 when St. Paul started emerging from its frontier days and inched into the 20th century.

Over the next 80 years, a combination of five more wood framed, structural concrete and steel buildings were added to the original structure. They were home at one time to an ice storage company, the old Ramsey County Morgue and the former headquarters for West Publishing.

Tucked inside a reinforced concrete wall pinned to the bluff, two wings of jail cells matching the natural curve of the bluff gently swung out from a central, 10 story tower.

A series of angular holding cells extending from the building façade with a honey combed pattern of huge, plate glass windows for each cell marked the jail's architecture from the strictly utilitarian look of its neighboring buildings.

The windows gave each inmate a panoramic 'room with a view' of the boating and barge activities on the flowing Mississippi River below them.

Work on the demolition began last fall with the interior environmental remediation work. When Rachel demolition crews and equipment rolled in they landed on a very tight site.

Just beyond the river and a four lane city arterial, crews are hemmed in by the bluff on one side, a pair of railroad tracks that sit within 20 ft. (6 m) of the buildings on the other side and the 1,200 ft. (366 m) Wabasha Bridge at one end.

With trains running on the nearby pair of tracks, “we have been coordinating and working closely with the railroad with respect to safety requirements, keeping them well informed and using flagmen when necessary,” Homolka said.

“Just trying to make room for the equipment and operations was difficult. We closed a portion of the adjacent parking lot for free space for a lay down area,” said Nick Bartemio, Rachel Contracting senior project manager.

“It speaks to the level, skills and professionalism of Rachael Contracting to do this kind of work on a site that has virtually no space to work in. We're just incredibly tight here,” Homolka added.

At the same time, the city of St. Paul was wrapping up the replacement of the Kellogg Boulevard bridge that runs along the bluff line directly adjacent to the demolition site.

To minimize potential traffic and construction disruptions caused by the overlap of two separate projects, “the city of St. Paul Bridge department and Ramsey County property management teams and engineers worked in concert during design development to ensure that design and specifications were complementary to one another,” Homolka said.

This is more then just a tear down and truck off the debris demolition. The project stands on its own merits because the bluff presented to engineers a labyrinth of tunnels and voids and engineering solutions to reinforce it and make it ready for new construction.

Homolka said, “the bluff is riddled with all kinds of utility, storage and other types of access tunnels that are really quite old.”

“West Publishing, who occupied the original six structures prior to the county moving in had several impressive, very large storage tunnels that had steel plates on the floors to absorb the weight of carts employees would trolley up and down with lead printing plates on them.

“Beyond the storage vaults, there are all kinds of utility tunnels, storm-water tunnels and voids in the bluff. Our engineering team spent quite bit of time, quite a bit energy early on, performed scans of the bluff and sandstone structure to identify to the best of anyone's ability where these were to ensure against tapping into these voids.

“Many of these voids are being filled in. There is a huge effort and a large amount of material going into that bluff,” Homolka said.

“The demolition is a demolition that we do all the time but considering the bluff stabilization including the installation of grouted rock bolts, cellular concrete, shortcrete, spray grout and a 24 in. thick structural reinforced cast-in-place concrete wall, it's a unique project,” said Bartemio.

For this demolition, Rachel Contracting is using its new Volvo EC700CHR ultra high reach demolition excavator with a reach of 105 ft. equipped with a Genesis GDR demolition attachment.

This machine allows Rachel Contracting to perform precise demolition at 105 ft. (32 m) and enables the operator to work with a 7,700 lb. (3,500 kg) demolition attachment to increase productivity on the job by reducing cutting and shearing time and the number of man-hours needed, Bartemio said.

Support equipment included several Cat 336 excavators, skid steers and all terrain forklifts. At any one time, there has been 10 to 20 workers on the site.

During the interior remediation of all seven buildings, Volvo and Cat backhoes and lifts and demolition crews removed asbestos, regulated waste and household hazardous materials including bulbs, ballast and mercury switches.

However, demolition crews discovered additional hazardous materials once they started gutting the interiors of the buildings.

In demolition work, an environmental engineer looks for the usual suspects of hazardous material based upon the age of and systems in the building, Homolka said.

“A pre-demolition survey and testing of samples is performed to first confirm the presence of hazardous material and an estimate of the extent and volume of the material is made for budget purposes.

Though the additional hazardous and painstaking removal work ate up additional time, crews were able to turn to the heavy hammering and demolition phase and stay on schedule.

Demolition crews started chipping away at the ADC, which is predominantly a concrete structure built at the east end of the series of seven buildings, just after the first of the year.

Unlike the original six buildings, the ADC was anchored into the bluff with a concrete stabilization wall.

With future development in mind, “we had to create a more robust condition of the existing wall. Frankly, the removal of the mass of the ADC removed lateral support and to enhance or maintain the same level of bluff stabilization behind what was the ADC, supplementary anchors were needed,” Homolka said.

To bulk up the strength of the existing wall, engineers included in the plans the addition of a secondary, cast in placed concrete wall in front of and anchored into the existing wall. This new wall will be extended along the length of the bluff to stabilize the entire bluff and bear the load of future construction.

Other contract includes the removal and capping of utilities and the removal of 9,000 tons (8,100 t) of contaminated soil, which will be trucked to a regulated landfill. Granular material will be used for backfill.

Most of the crushed concrete will be recycled. Some of it will be used for road base and the rest will be stock piled for future use.

Crews recently completed the demolition of the ADC. They are now tearing into the original six structures. Once they are gone and all demolition material is trucked off the site, concrete crews will begin framing and pouring concrete for the new wall, which will begin construction this summer and be completed by the summer of 2017.

With a relatively mild winter on their side, Rachel Contracting crews are on schedule and will have removed all seven buildings by this August. With the completion of the stabilization wall in the summer of 2017, Ramsey County will place the property on the market for development.