Adding the project to the President's Dashboard will make the Hudson Tunnel Project a top priority for the multitude of agencies involved in the review process. 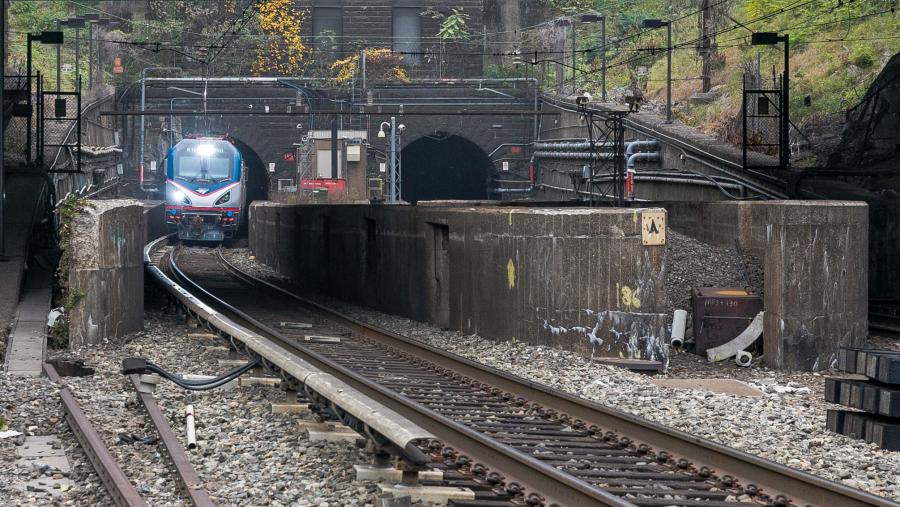 Major progress has been made in securing federal grant funding and financing for the Hudson Tunnel Project & Portal North Bridge.

The federal leaders are announcing several major milestones involving the President's Permitting Dashboard, the concrete casing portion of the Hudson Yards Right-of-Way Preservation Project and eligibility for Federal grants and financing for Portal North Bridge and the Hudson Tunnel Project, critical components of the Gateway Program.

These key milestones mean that the Gateway Program is moving along at record speed.

The U.S. Department of Transportation (USDOT) added the Hudson Tunnel Project to the President's Permitting Dashboard. The Gateway Program partners previously announced a commitment of the necessary resources to expedite environmental reviews, but the announcement that the project will be listed on the Dashboard will ensure that the established schedule is delivered on time.

Adding the project to the President's Dashboard — an online tool for federal agencies, project developers and interested members of the public to track the federal government's permitting and review process for large or complex infrastructure projects — will make the Hudson Tunnel Project a top priority for the multitude of agencies involved in the review process.

The Permitting Dashboard is one element of a larger, government-wide effort to streamline the federal permitting and review process while increasing transparency, in addition to improving environmental and community outcomes.

Amtrak, working with the Long Island Rail Road, Related Companies and NJ TRANSIT has successfully preserved the right-of-way under a portion of the Hudson Yards development on the West Side of Manhattan by advancing construction of the underground concrete casing, which can house future rail infrastructure. Preserving the right-of-way maintains the option for a future tunnel to connect directly to Penn Station New York. The Department of Transportation, with strong support from Schumer, provided $235 million in federal Sandy resiliency funds for the project — the first phase of actual construction of a new Hudson River Tunnel. The casing now extends from 10th Avenue through the western edge of the 11th Avenue viaduct.

The USDOT announced the release of a new credit-planning tool, in conjunction with the establishment of the Build America Bureau, under the Fixing America's Surface Transportation (FAST) Act. The FAST Act made key reforms to the Railroad Rehabilitation and Improvement Financing (RRIF) program, a $35 billion federal loan program, and the Bureau has built on the reforms to create an Emerging Projects Agreement, which eligible partners can now utilize.

The Emerging Projects Agreement allows the Department to offer technical assistance and focused USDOT credit resources for complex, large-scale projects seeking low-cost federal credit. Foxx is optimistic that this will enable big, ambitious projects to get a head start on plans while project sponsors continue to assemble the financing packages necessary to utilize federal credit programs.

In July, USDOT accepted both the Hudson Tunnel Project and Portal North Bridge — critical elements of the Gateway Program — into the New Starts Project Development process, making these projects eligible for FTA funds.

The Hudson Tunnel Project and Portal North Bridge now move forward with identifying specific development plans and, in the case of the Hudson Tunnel Project, completion of the environmental review process. The necessary environmental reviews have already been completed for the Portal North Bridge to receive FTA investment under New Starts. The move also allows costs incurred by Amtrak, NJ TRANSIT and the Port Authority of New York and New Jersey (Port Authority) related to the environmental review and engineering and design activities to eventually be reimbursed under the FTA program.

The federal leaders also announced that on Sept. 2, the Gateway partners submitted a Portal North Bridge Core Capacity rating package to the FTA for evaluation. If the project scores well, it will be included in the Department of Transportation's recommendation for the President's FY18 Budget.

Inclusion of Portal North Bridge in the Budget, expected to be released next spring, would represent a huge step toward securing significant federal grant funding. Simultaneously, the Gateway partners are advancing engineering and environmental work on the Hudson Tunnel Project with the goal of having that project included in the President's Budget in the near future.

“The U.S. Department of Transportation is using every tool at our disposal to move the Gateway Program forward, and there has been major progress on the Federal side over the past year,” Foxx said. “The Department put $55 million into planning for the replacement of the Portal Bridge, and the Hudson Yard's concrete casing project received $235 million in federal funds. We've made the project eligible for potentially billions in Federal grants and loans, accelerated the environmental permitting process, and we are accelerating the project by putting it on the President's Permitting dashboard.”

“Today's news solidifies the federal government's commitment to getting the Gateway Program fast-tracked and funded,” said Schumer. “Now, we must continue moving full speed ahead, ensuring the federal grant dollars are ready to use, and lengthy reviews sped up. There is simply no time to waste when it comes to the countless jobs that depend on a safe and functioning gateway tunnel. With the continued partnership between the federal government, New York, New Jersey and Amtrak, we will get this project done and we will preserve and protect the heart of our regional and national economy for the long haul.”

“Access to New Starts brings with it the potential for billions of dollars of federal funding — and there's no doubt in my mind that a project with the national significance of Gateway is deserving of that type of commitment,” added Menendez, ranking member of the Senate's transit subcommittee with oversight of the New Starts program. “I'm pleased that language that I helped author was included in the final transportation bill, making joint transit-rail projects like Gateway eligible for New Starts funding. I'm proud of the commitment this group has made to undertake a difficult effort, because it's the right thing to do for our constituents, for our region, and for our nation as a whole.”

“Each day thousands of New Jersey commuters utilize our state's rail infrastructure, making it a critical lifeline for our region's economy,” said Booker, the top-ranking Democrat on the Senate subcommittee, which oversees America's rail infrastructure. “We must remain committed to providing commuters the transportation system they need and deserve by investing in the Gateway Program, which will help strengthen our economic growth and boost job creation. Our efforts over the past year have elevated Gateway as a national priority and I am pleased to see this continued progress by state and federal partners. Today's announcement moves us closer to securing federal funding for vital projects like Portal Bridge in New Jersey and streamlines the permitting process while being mindful of potential environmental impacts to our communities.”

“The accomplishments and milestones achieved in the past year represent real, tangible progress in advancing the Gateway Program,” said Coscia. “New York City is the beating heart of the Northeast Corridor and the improvements envisioned under Gateway are part of the foundation for the economic future of this region. We appreciate the leadership, collaboration and engagement of our partners in this effort and look forward to celebrating much success in advancing this Program in the future.”

• May 30, 2013 — Schumer, U.S. Transportation Secretary Ray LaHood and Coscia announce $185 million in federal aid from the Superstorm Sandy relief package to begin work on Phase I of the Hudson Yards Right-of-Way Preservation Project, which maintains the option for a future tunnel to connect directly to Penn Station New York.

• Sept. 23, 2013 — Work begins on Phases I & II of the Concrete Casing project between 10th Avenue and the western edge of 11th Avenue in Manhattan. Funding for Phase II provided by $50 million made directly available to Amtrak through the Superstorm Sandy Relief package and a subsequent commitment of $11 million by the Long Island Rail Road and NJ TRANSIT.

• Summer 2015 — Significant delays occur for commuters in and out of Penn Station as a result of infrastructure failures in the existing North River Tunnel.

• Aug. 11, 2015 — Schumer gives a speech at NYU's Rudin Center for Transportation identifying federal funding sources for the project and calling for collaboration and the creation of a Gateway Development Corporation (GDC) to advance the project.

• Aug. 18, 2015 —Booker hosts a meeting in his office with Foxx, Menendez and New Jersey Gov. Chris Christie to discuss summer transit delays and the Gateway Program. They agree on the need for significant federal investment and commit to working together on equitable financing of the project and developing a framework to support the Gateway Program.

• Nov. 23, 2015 — Amtrak and NJ TRANSIT execute an agreement for NJ TRANSIT, with the Federal Railroad Administration, to commence environmental work on the Hudson Tunnel Project. Primarily funded by Federal appropriations provided to Amtrak.

• May 2, 2016 — Environmental review commences with public scoping meetings on Hudson Tunnel Project EIS in New York City on May 17 and Union City, N.J. on May 19.

• Sept. 2, 2016 — Gateway partners submit a Portal North Bridge Core Capacity rating package to the Federal Transit Authority (FTA) for evaluation. If the project scores well, it will be included in the DOT's recommendation for the President's FY18 Budget.

• Oct. 14, 2016 — Foxx and Gateway partners announce inclusion of Hudson Tunnel Project on President's Permitting Dashboard — an online tool for federal agencies, project developers and interested members of the public to track the federal government's permitting and review process for large or complex infrastructure projects. In addition, Gateway partners announce substantial completion of the concrete casing through the Eastern Hudson Yard.