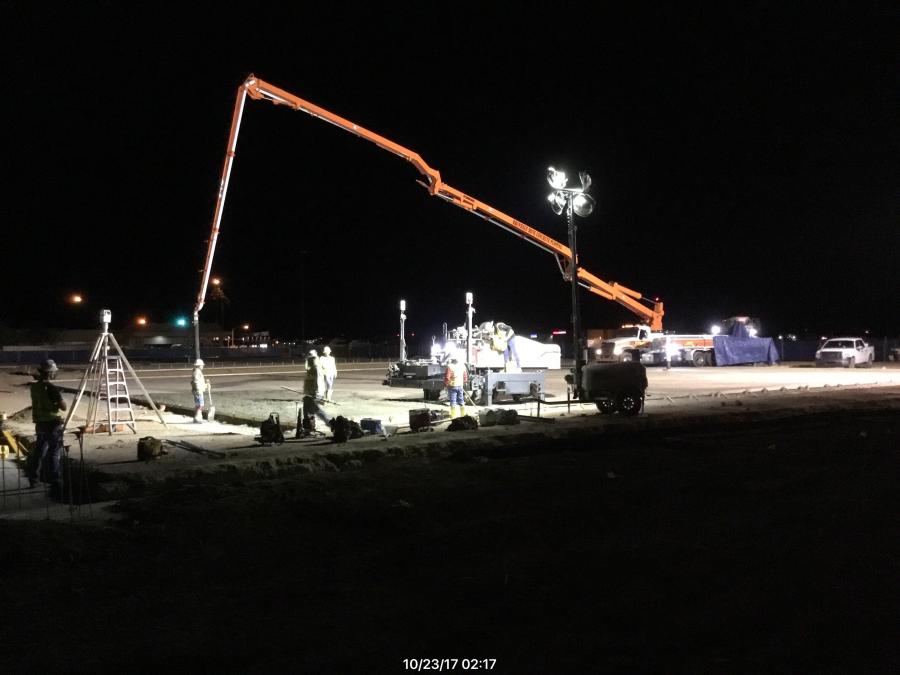 “It’s fascinating to watch each stage of construction occur. I was amazed to see the claw demolish buildings within a couple of weeks. We are eagerly awaiting the full transformation of this prime airport land,” said Sarah Ferrara, aviation planning and outreach coordinator. (JE Dunn Construction photo)

As part of a year-long, $27 million project at Scottsdale Airport in Arizona, crews are redeveloping the former terminal building and adjacent office building. Construction includes a new aviation business center and two executive-size hangars that make better use of the airport property.

Mascaro said the demand for hangar space at the airport is soaring.

"With limited land available, it was imperative that airport property be utilized as wisely as possible. This project affords us the opportunity to transform a not widely used terminal building and offer much-needed hangar space, an aviation business center and Veterans Memorial. As a general aviation airport, we do not offer scheduled or commercial airline service, so there was no need for a terminal building, but there is a need for more hangar space at our airport."

The new aviation business center will include a public plaza, restaurant, event venue, airport administration space, the U.S. Customs and Border Protection office, as well as other offices. In working on the master plan, officials wanted to not only maintain the value of Scottsdale Airport, but actually exceed it.

"This project will be solidifying our ranking as one of the top airports in the county," said Mascaro. "I'm not sure of any aviation airport similar to us that is undertaking such a large task, and then working with our business partners."

The project will upgrade and enhance the area with some of the largest hangars at the airport and maximize use of the parcel's building footprint.

"The terminal building was original constructed in 1969 aiming to serve scheduled flights, but that is no longer the vision at this airport," said Mascaro. "Instead, this project will transform this valuable land to maximize each square foot of space with office space, restaurant and event venue, and 60,000 square feet of hangar space.

"When much needed partnerships were formed, it made now the right time. Those partnerships are with Gemini Air Group Inc., Volanti Restaurant and D.M.D Real Estate Group. The price tag will be financed through city-issued bonds. Revenue from the lease agreements and ancillary business permit fees will cover the debt payments over 20 years."

The highly anticipated executive hangars are slated to be completed and open for business by spring 2018. The aviation business center will be finished in late summer.

The construction project will reportedly not have any impact on day-to-day operations. While there will be some limited roadway impacts, officials will ensure access to businesses surrounding the project area at all times during construction. All businesses in and around the airport will remain open. The airport administration offices relocated to the operations center, during the interim.

Located just 9 mi. north of the downtown area, Scottsdale Airport is a general aviation reliever facility that is home to many of the valley's corporate aircraft. One of the airport's most significant contributions is the major economic stimulus it provides to the city of Scottsdale and north valley region. A recent study found the airport generates more than $182 million annually in revenue to the area's economy, and the combined annual impact of the airport/airpark is approximately $2.5 to $3 billion.

"Scottsdale Airport has a rich history in this community," said Sarah Ferrara, aviation planning and outreach coordinator. "This project will continue to embrace that, and offer a place for residents and visitors to fully experience the airport, its history and maximize use of this prime airport land. The large executive hangars will fill the need for more hangar space, and the aviation business center will offer residents and visitors a place to meet, dine, walk around and enjoy aircraft."

JE Dunn is serving as the general contractor for the redevelopment and upgrades. Project manager Daron Kettler said the site work required for the assignment has included the selective demolition and removal of a good portion of the site work.

"This includes over-excavation and compaction of the new building pads, site utility work, improvements to the existing parking lot and realignment of Airport Blvd."

Construction at the airport began in July 2017. Several tasks have already been completed, such as the tear down of the old terminal building, demolition of the airport operations building, initial civil and earthwork and site utilities.

"The hangar project will include demolition of existing structures, construction of two new 30,000 square-foot executive hangars, site work improvements to the existing parking lot and realignment of Airport Blvd.," said Kettler. "The construction of the new executive hangar space and associated administrative office space will include tilt concrete walls and steel roof structure."

Crews are keeping a close eye on outdoor conditions, which aren't a problem at this point.

"Weather has not been a factor to date; however, we anticipate some adverse Arizona weather conditions will affect the day-to-day work schedule."

Kettler said many different types of equipment are being used during construction.

"They include water trucks, backhoes, standard earthwork machinery and cranes for erection of steel and tilt panels. The new executive hangars include concrete tilt walls with a steel roof structure. The new administration building will include a steel structure with the exterior finish including glass, as well as metal panels, with steel and EFIS accents."

Kettler added, "The Thunderbird Field II Veterans Memorial will include suspending a WWII era Boeing-Stearman PT-17 under a steel canopy structure at the entrance to the new airport administration building. This memorial is being constructed to pay tribute to past and present veterans and the history of the airfield. Constructing this memorial will require extensive coordination between our trade partners, Thunderbird Field II Memorial Veterans Inc. and Scottsdale Airport team. This Boeing-Stearman PT-17 plane is still being flown today."

For Steve Ziomek, chairman of Thunderbird Field II Veterans Memorial Inc., this portion of the project has special meaning.

"The memorial will be a first for the city of Scottsdale and will commemorate the rich history of the Scottsdale Airport and honor all veterans. The airfield, named Thunderbird Field II, was built in 1942 for the sole purpose of training U.S. Army Air Corps pilots. More than 5,500 young men and women trained for war before the airport was decommissioned in October of 1944."

The centerpiece of the memorial will be an actual Stearman bi-plane, the type of plane flown by the young aviators during their primary pilot training.

"It will hang from the ceiling in an open-air plaza. The memorial wing will house a large monument displaying the service plaques of the U.S. Armed Services, Army, Navy, Air Force, Marine Corps, Coast Guard and the revered POW/MIA service plaque. There will be several plaques highlighting the history of the airfield, the history of the Stearman airplane and honorary donors to the Veterans Memorial project.

The Stearman acquired by the Thunderbird Field II Veterans Memorial group continues to take to the skies, but on a different mission.

"This beautiful plane, painted in the original Army Air Corps blue and yellow, is now being flown as part of the fundraising efforts of the non-profit," said Ziomek. "Once the aircraft is retired and hung as the centerpiece of the memorial, those taking a flight will be able to say 'I flew in that exact plane', with the caveat that their flight was not in 1941."

DWL Architects + Planners Inc. is the lead architect on the project, responsible for the program and architectural design and program of the three buildings. Along with Mead & Hunt, the engineer of record, DWL Architects designed the site plan.

According to Michael Braun, executive vice president with DWL Architects, the vision for the overall project was to upgrade and enhance the existing airport terminal area by maximizing use of the available site through the development of a new, efficient aviation campus.

"The new facility will enhance services to the users, allowing the airport to compete on a national level to house modern aircraft. In order to do this, Mead & Hunt and DWL maximized the site and the program, designed a facility and campus that integrated the airport's history and created an aviation business center.

"There are many agencies and entities involved in the development of this airport project, each with its own regulations and requirements. In collaboration with Mead & Hunt, our goal from the beginning, as the architect, was to coordinate all of the stakeholders and build consensus on the design, while making sure all the various goals were met.

Another challenge the team had to overcome relating to the site was working with and around existing infrastructure.

"Our design and construction team has worked through several barriers on the existing site to achieve a campus that will improve the flow of operations for all users and customers. Through our experiences as architects, we understand that it is rare for a project to end up on an untouched site."

Officials have been environmentally conscious from the start, with the facility targeted for LEED Gold certification.

"During the initial design phases, our team took sustainability into consideration and designed with a sensitivity towards creating a beautiful design that also is integrated into the existing environment," said Braun. "The building's plan, organized by function, embraces its location within the Sonoran Desert, and takes full advantage of its solar orientation. The main glass façade faces north to control heat gain, while integrated shade screens, overhangs and recessed openings provide additional protection from the south and west exposures.

"Interior spaces are designed to extend into the outdoors, both physically and visually, when appropriate. Materials with colors and coarse textures associated with this region also were incorporated into the facility. The design complies with the use of concrete block and self-shading ribbed metal panels. A variety of textures and natural materials are used to provide visual interest and richness, particularly at the user level."

Braun said the terminal area redevelopment project is transforming the existing airport into a community resource and point of pride for the city of Scottsdale.

"The city has been very involved in the process, and is looking forward to creating a more welcoming destination for the airport users, as well as citizens of Scottsdale and also tourists. This is going to be more than just an airport — it's a multi-functional experience with several amenities, plazas and larger hangar spaces."

She added, "The aviation business center will feature a second-floor deck that will provide a wonderful view of the Sonoran mountains. On some sunset nights, the mountains illuminate with a purplish hue. It's absolutely beautiful. There will be great views of the luxurious aircraft landing and departing the airport."