The Gold Star Memorial Bridge is a pair of steel truss bridges that carry both Interstate 95 and U.S. Route 1 across the Thames River. 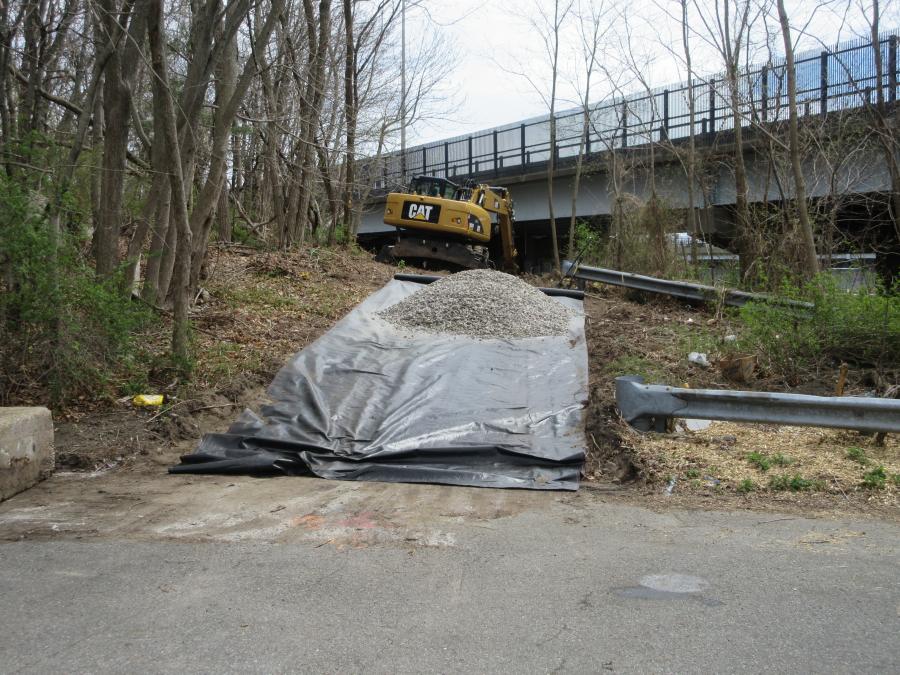 A massive $30 million overhaul of the southbound span of the Gold Star Memorial Bridge has begun. (ConnDOT photo)

A massive $30 million overhaul of the southbound span of the Gold Star Memorial Bridge on I-95 between the Connecticut cities of New London and Groton has begun. The project that kicked off on April 1 is slated to conclude at the end of November 2018. Once the work is complete, the span is expected to last about 25 years.

A few months into the project, workers are busy patching up concrete and repairing the southbound span. The huge size of the bridge — the southbound span includes five lanes of traffic, three through lanes and two exit lanes — requires the crew to stay on a steady project plan.

Connecticut Department of Transportation officials report that improvements are needed to repair deterioration from road salt, debris and wear on the bridge.

The Gold Star Memorial Bridge is a pair of steel truss bridges that carry both Interstate 95 and U.S. Route 1 across the Thames River. It is actually a set of twin bridges, but they are generally spoken of as a single bridge. Each bridge features 11 spans, which is the distance between two intermediate supports for a structure.

Construction of the bridge took place from 1941 to 1943, opening to traffic on Feb. 27, 1943. In 1951, the bridge was designated as the Gold Star Memorial Bridge in honor of armed forces from Groton, New London and Waterford who were killed during World War I, World War II and the Korean War.

“Virtually all businesses and industries in the area depend on the bridge for access,” said Kevin Nursick, a spokesman of the Connecticut Department of Transportation (ConnDOT).

In addition to carrying motor vehicles, the bridge has a pedestrian and bicycle path on the south span.

The bridge is the largest structure in the state with more than one million sq. ft. of deck area, and the longest bridge in the state at 6,000 ft. Its 11 highway lanes are needed accommodate heavy daytime traffic crossing the bridge.

“Traffic has steadily increased along I-95, one of the major corridors in Connecticut,” Nursick said. “Peak summertime traffic reaches 55,000 vehicles per day.”

A more extensive $200 million improvement project for the northbound bridge is scheduled for a spring, 2018 start. It will include major steel strengthening of girders and trusses, complete deck replacement, bearing replacement, maintenance painting and substructure repairs to piers and abutments.

Like the southbound span, the northbound bridge span includes five lanes of traffic including three through lanes and two exit lanes.

About 4,500 cu. yds. of asphalt will be laid over the course of the project.

Small amounts of steel will be removed for recycling.

Contractor is Experienced in Marine Construction

Mohawk Northeast Inc. was the low bidder of the project.

ConnDOT is administering the project contract. Figg Bridge of Tallahassee, Fla., has been hired for construction inspection services.

The project has about 10 subcontractors on duty. They include Quaker Construction Services of Millville, Pa.; Santoro Construction of Syracuse, N.Y.; Garrity Asphalt Reclaiming Inc. of Bloomfield, Conn.; and KTM Electrical Contractors of Orange, Conn.

About 40 construction workers are on duty daily at the project site.

One of the biggest challenges of the project is maintaining traffic and access to the bridge during construction. Crews also must deal with logistical and safety challenges.

“Many of the bridge spans are over water and very high up,” Nursick said. “The main truss sections are very deep as well, making them difficult to access and install shield.”

Additional off-peak hour lane closures may be necessary to expedite the needed repairs, which are numerous.

Crews will use concrete patches to fix places on the bridge where concrete is falling apart and will replace reinforcing steel where needed.

Workers will lay new asphalt and replace the old membrane underneath the asphalt. Expansion joints will be replaced as well.

Lighting improvements also are planned to better illuminate the bridge at night.