When complete, the facility will feature approximately 39,000 sq. ft. of mixed-use space, along with 60 residential market-rate apartment units. 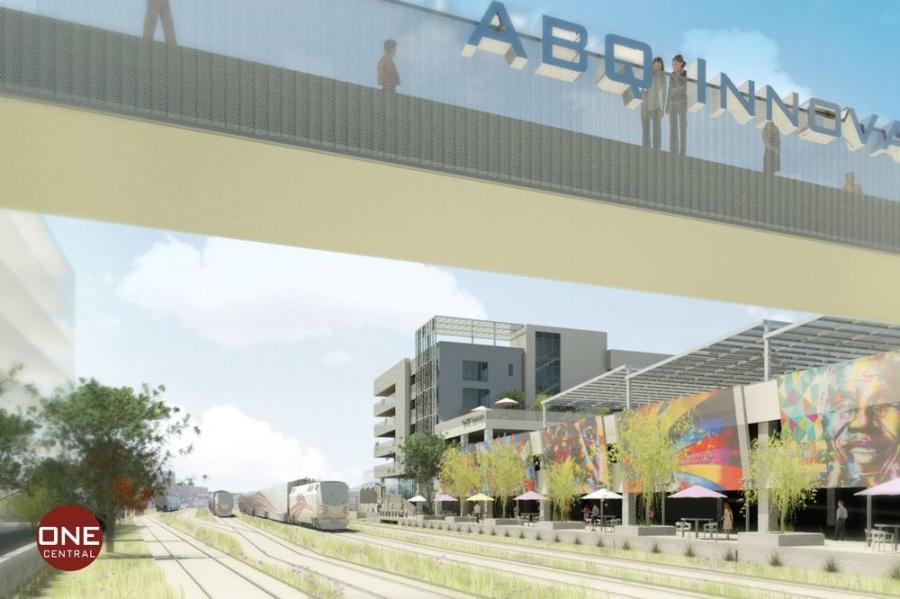 Situated in the heart of downtown Albuquerque close to the Alvarado Transportation Center, shops, dining and the new ART line, the project will target both millennials and Generation Z. (SMPC Architects photo)

Designed to bring vibrancy to the downtown area, a $40 million entertainment hub is taking shape in Albuquerque, N.M. When complete, the facility will feature approximately 39,000 sq. ft. of mixed-use space, along with 60 residential market-rate apartment units.

"The city is thinking big picture and long-term, so downtown continues to become the place for New Mexicans to live, work and play," said Albuquerque Mayor Richard Berry, who came up with the idea for the highly anticipated project. "A strong, vibrant downtown is critical to the overall success and health of our city."

Construction of One Central Entertainment District began in fall 2016, with a formal media event held in January 2017. Revitalizing downtown and Route 66 has been a focus of the current administration, making now the right time to build. The redevelopment is expected to catalyze economic growth and redevelopment, including office, residential and retail in the surrounding area.

The creation of the Albuquerque Rapid Transit (ART) line, which launched partial service Thanksgiving weekend, adds momentum to an area that will be amplified by the catalytic One Central Entertainment project. The neighboring Innovate ABQ site, currently under development, also will create a dynamic interchange with the hub.

Another key component of the project is the construction of an above-ground, multi-story parking structure with 423 spaces available. The garage will be owned by the private developer, One Central Associates LLC, for 10 years, and operated by the city of Albuquerque. After that time, the city has the option to purchase the garage at a nominal cost of $1,000.

"The city is partnering on this important transit-oriented development project because we believe it will create a synergy with Innovate ABQ, it will create housing and job opportunities, and will lead to further downtown redevelopment activity," said city of Albuquerque planning director Suzanne Lubar. "Seeing this project come together has been an amazing experience."

Working with the Metropolitan Redevelopment Agency, officials hope to remove blight and encourage redevelopment in areas designated by the city council.

"The groundbreaking ceremony really brought home the fact that next year the landscape of our downtown will look completely different, with a new vibrancy and level of activity," said Lubar. "It's very exciting to see the construction progress more and more each day."

The community has reportedly been very positive about the project. Residents are excited to have more options for dining, shopping and entertainment, while others are pleased to have more market-rate housing options in their community.

Located at First Street and Central Avenue directly across the street from the Rail Runner and Amtrak station, the project is being funded by a combination of lodger's tax bond proceeds, general obligation bonds with a metropolitan redevelopment purpose, parking revenue bond proceeds, other metropolitan redevelopment funds and funds provided by the private developer.

The construction site is approximately 1.7 acres and an estimated 290 by 230 ft. Situated in the heart of downtown Albuquerque close to the Alvarado Transportation Center, shops, dining and the new ART line, the project will target both millennials and Generation Z. Because of its proximity to the ART line, there will be easy and quick access to the University of New Mexico campus. The project creates an urban living environment that gives individuals the opportunity to reside and work in a trendy location, and enjoy their off hours all in one spot.

Creating spaces for urban living in Albuquerque's downtown area is considered vital to the success of the city's current 2025 Downtown Sector Development Plan, and also to the recently updated Albuquerque/Bernalillo County Comprehensive Plan. The urban living portion of the project, along with retail space that includes a much needed grocery store, is considered a huge step in the right direction. Supporters of the project are counting the days until completion.

"The construction of the shell building is well under way," said Lubar. "It's exciting to see the flurry of activity on the site, and to think that in just months a modern building will stand there with amazing views of the mountains and with access to Innovate ABQ and the ART line."

As for the projected economic impact, the public/private partnership creates jobs for skilled workers while construction is under way, as well as permanent jobs after it's completed for the businesses that will occupy the commercial space and manage the apartments. In addition, the available commercial space encourages new businesses to move to downtown Albuquerque, especially with the built-in customer base living in the apartments above.

By partnering with a private developer on this project, the city also will increase the available parking for employers who have recently moved downtown, as well as encourage additional employers to locate or relocate in the central business district by providing their employees and patrons with safe and convenient parking.

According to Jerry Mosher, developer/principal, One Central Associates LLC, " Working on the One Central Entertainment Hub with the city of Albuquerque has been extremely rewarding. I've always wanted to do a project in downtown Albuquerque, and this public/private partnership was a perfect fit. The vision included several goals, including developing the site into a premier entertainment hub with 21st-century amenities that fits seamlessly into the existing and proposed urban character. The redevelopment could potentially feature dining, retail, market, parking, entertainment and special events to create a magnetic experience that draws people into the urban core.

"The site is ideally located in the central urban fabric of Albuquerque. It's across from the proposed Innovate ABQ site, which will be developed by the University of New Mexico and its partners into a highly connected, business incubator community where people can develop new companies, grow existing ones and attract more business. Redevelopment of the site will build off of the energy of Innovate ABQ to create a corridor full of vitality, innovation and excitement."

Mosher noted that the redevelopment will reflect the urban form, such as multi-story buildings with minimal setbacks, maximizing the urban footprint, and also will include a special event outdoor gathering space, such as a plaza or courtyard/patio, integrated within the design. The redevelopment also will have a vibrant streetscape and direct pedestrian connections to Central Avenue and 1st Street.

Main equipment and materials used on the hub include cranes, boom lifts, steel, metal stud framing, wood framing and EIFS. Approximately 30,000 cu. yds. of dirt/materials will be moved during construction.

"The One Central Entertainment Hub differs from other projects, because it is a combination of pre-cast, steel and wood construction on a site with space constraints," said Mosher. "One of the biggest challenges for this site is the fact that there's no laydown area; however, we have found ways to work around that, and the project is proceeding as planned. The build-out of the apartments will definitely be the most time-consuming part of construction for this project."

Klinger Constructors LLC is serving as the hub's general contractor. Both SMPC Architects and Studio Southwest Architects Inc. have been involved in designing the structure, which is contemporary in style and will be a total of six floors. Officials estimate full completion with the certificate of occupancy for the residential space sometime in the spring of 2018.

"I'm really looking forward to seeing both the residential and commercial portions of this project completed," said Mosher. "Mixed-use projects are always great to see, and really appeal to a broad audience. I really want Albuquerque residents to use the One Central Entertainment Hub as a place to work, live and play. My hope is that this project will increase foot traffic to the area and give folks even more reasons to come to downtown Albuquerque."