Casting the pre-stressed bulb girders began in September, with all pieces needed for the northbound bridge superstructure to be completed by May 2018. 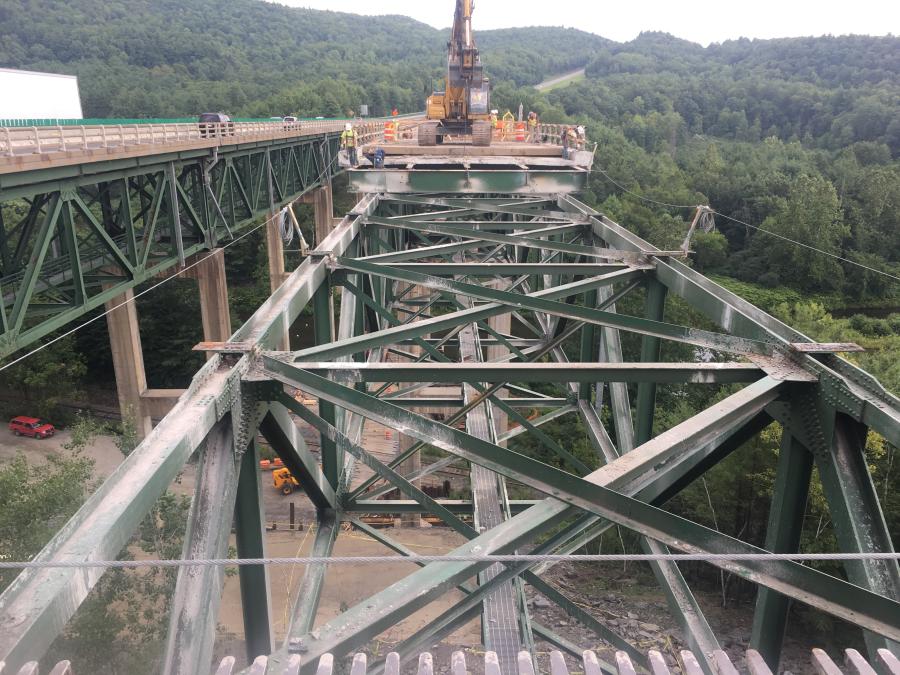 Reed & Reed Inc. of Woolwich, Maine, serves as the general contractor for the project, which is 90 percent federally funded, with the state making up the difference. (Vermont Agency of Transportation photo)

In Windham County, Vt., construction crews are making significant progress on the $44 million Rockingham Bridge 24N and 24S project, which will replace the existing bridges with two new structures. The current bridges were constructed in the early 1960s and rehabilitated in 1988.

“The existing bridge decks are very poor and would have needed replacement in the near future,” said Douglas Bonneau, project manager of Vermont Agency of Transportation (VTrans). “They are in need of concrete deck replacements, new coating systems and have substandard bridge railing. In addition, the bridges are narrow and do not have the structural capacity to carry widened bridge decks with modern bridge railing, which is heavier than the existing bridge railing. Also, the existing deck truss bridges are fracture critical, meaning the design of the bridges do not include the redundancy of structural elements such that there would be multiple load paths should one element like a gusset plate fail.”

Bonneau noted that the work is being performed in phases, with set timelines.

“Being four-span, 800-foot bridges that pass high over the Green Mountain Railroad and Williams River, construction of a temporary bridge to maintain two lanes of traffic in each direction would have been cost prohibitive. The traffic volumes in this portion of I-91 are low enough to allow a reduction to one lane in each direction through the project site. The crossover putting traffic onto the southbound bridge was put into service at the end of July, and demolition on the northbound bridge began.”

Golden Hill Road activities include continued truck traffic delivering bridge material and equipment, along with construction work on the temporary trestle across the river and work on the access road under the bridge. As far as the impact on motorists, through traffic on Interstate 91 is reduced to one lane in each direction. Drivers merging onto I-91 northbound from Exit 6 have been advised to use extreme caution.

“In the first phase, both north and southbound travelers are moved onto the existing southbound bridge, with one lane in each direction,” said Bonneau. “In phase II, both directions will share the newly built northbound bridge, while the replacement southbound bridge is constructed. Motorists will occasionally be required to use U.S. Route 5 to access I-91 northbound, as the on-ramp will be closed for certain construction activities for short durations of time.”

Reed & Reed Inc. of Woolwich, Maine, serves as the general contractor for the project, which is 90 percent federally funded, with the state making up the difference. Bonneau said it's very encouraging to see the work moving forward, adding that, to date, weather has not been a factor.

“With regards to studies performed prior to construction, the project scope included various options for replacing the concrete decks with lightweight deck systems to garner the desired bridge width. However, when we considered all the project costs, including a paint system on each bridge and the fact that we would still have two fracture critical structures on tall piers that are approaching 60 years in-service, we concluded that replacing the structures was a better use of the taxpayers' limited dollars.”

The site was lightly vegetated within the project limits, with limited access. According to Daryl Bassett, resident engineer of VTrans, the demolition of the existing bridges is one of the biggest challenges of the project.

“A large amount of prep work is required to facilitate the demolition process. The contractor will construct several shoring walls, two work trestles and two shoring towers to facilitate demolition. In addition, the demolition will require several high-capacity tandem crane lifts to remove the superstructure.”

The new structures will be two distinct bridges, with individual substructures. The main concrete bridge girders will range in length from 96-ft. to 145-ft., and vary in depth from 6 to 10 ft. These will be transported to the site with trucks using trailers with a steerable dolly. The pieces will range in weight from 144,920 to as much as 186,920 lbs.

“This project is limited to the replacement of the existing bridges, so earthwork is minimal,” said Bassett. “In order to create construction access, the contractor placed about 15,000 cubic yards of fill.”

The main equipment being used on the job includes cranes, excavators, pile driving hammers and dump trucks. Steel piles for substructure support and cast in place concrete and reinforcing steel for the substructures also will be required. Stainless steel reinforcing steel will be used for the deck and f-shape barrier to increase service life.

The most time-consuming work has been the construction of access roads and temporary work required to demolish the existing bridges and then construct the new bridges. As the project continues, traffic will be diverted utilizing median crossovers, which will reduce the northbound and southbound interstate barrels from two lanes to one lane in each direction. Radar feedback signs, conflict warning systems, uniformed traffic officers, appropriate signage etc., and a smart work zone are utilized to ensure the safety of the traveling public and workers.

“It's very rewarding to see a project go from the plan phase to completion, and know that actions taken during these phases will produce a quality project.”

Work officially began in May of 2017 and is expected to be completed by June 2020.