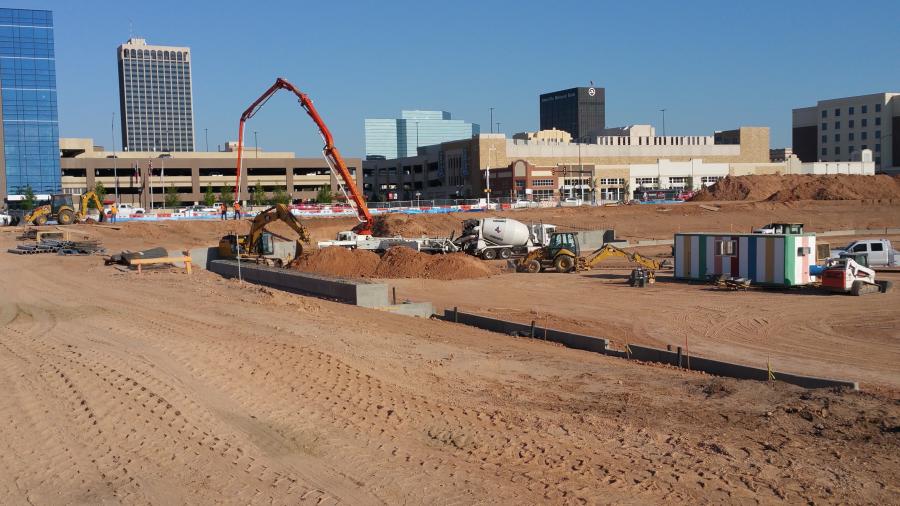 On March 1, work on the stadium officially started, as excavators began moving dirt from the construction site in preparation for the planned baseball park. (Jerry Danforth, City of Amarillo photo)

Workers and city officials expect a new $45.5M minor league stadium in Amarillo to be a major hit with fans. The facility will be home for the now double-A San Antonio Missions. With the move, the name of the team will be changed. The stadium will be located on Buchanan Street in downtown Amarillo.

It marks the return of AA affiliated minor league baseball to the city for the first time since the Amarillo Gold Sox left in 1982. The city of Amarillo and the Elmore Sports Group agreed on a 30-year lease of the stadium for the team to play in.

On March 1, work on the stadium officially started, as excavators began moving dirt from the construction site in preparation for the planned baseball park. Excavation will be a primary part of initial project work. Plans called for removal of 130 excavator loads per day to complete full dirt removal in 30 to 35 days. Once the correct elevation for the stadium site was achieved, crews began installing cement retaining walls.

Once the project is complete, the home team is scheduled to begin Texas League play later in the same month that work concludes. The new stadium is expected to be fully operational on April 1, 2019.

“We don't have a stadium or team name yet and this is under the control of the Elmore Sports Group,” said Jerry Danforth, director of facilities for the city of Amarillo.

The stadium is being funded by hotel taxes only. No local or city tax dollars will be used for the construction, Danforth said.

Work on the new stadium is now in full swing and on schedule. Danforth added that there are 75 workers at the ballpark.

Materials will be in heavy use in constructing the new stadium. Danforth said that structural steel arrived the third week of June, with a goal of getting all of the underground foundation in place prior to the steel arriving.

Crews expect to lay 8,300 cu. ft. of concrete over the life of the project.

They will install 700 tons of structural and other types of steel at the ballpark.

New stadiums tend to have better scoreboards and sound systems.

That could be the case at the new Amarillo stadium, but details are not yet available.

“Scoreboard and AV [audio visual] systems are out to bid now and will be open in July,” Danforth said. “LED lights will be [used] throughout the stadium as well as LED field lighting.”

The stadium will have three levels. The distance from home plate to center field is 400 ft. To distance to the left and right field fences is equal at 352 ft.

The facility will sit next to City Hall with views of downtown Amarillo. Fans will look out at the high-rise buildings of downtown and also see historic Route 66, just 100 ft. north of the stadium.

Food is an important consideration at the stadium and the team is considering several options for food services. They include three full kitchens and an outfield bar in left field.

An economic impact study by Washington, D.C.-based Brailsford & Dunlevy found prior to construction that direct benefits to the city would include $8.7 million in economic activity, 118 new jobs and $3.5 million earnings.

“We are currently ahead of schedule on dirt, concrete and underground work,” Danforth said. “All structural steel and building materials are on schedule at this time.”