$570M Port of Gulfport to Double in Size

When completed, the Port of Gulfport will double in size and feature facilities to accommodate current and future tenants, while providing for long-term competitiveness in the global market. 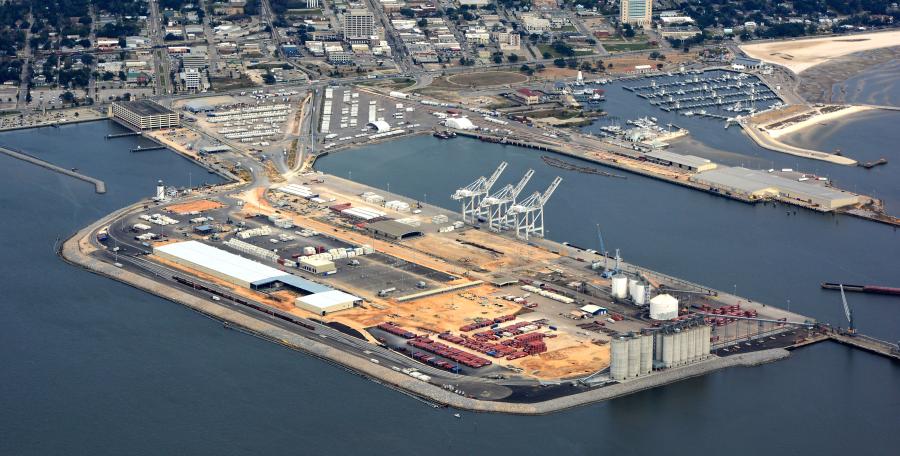 Port of Gulfport photo In Gulfport, Miss., work on a $570 million restoration and expansion project continues, as crews transform a container, bulk and break-bulk seaport still reeling from Hurricane Katrina

In Gulfport, Miss., work on a $570 million restoration and expansion project continues, as crews transform a container, bulk and break-bulk seaport still reeling from Hurricane Katrina. When completed, the Port of Gulfport will double in size and feature facilities to accommodate current and future tenants, while providing for long-term competitiveness in the global market.

“After Hurricane Katrina, we had no choice but to set the stage for rebuilding efforts, and to take the opportunity to enhance and expand the port's operations,” said Jonathan Daniels, the executive director and CEO of the Port of Gulfport. “The storm had a crippling effect on the Port of Gulfport's infrastructure, equipment and storage facilities. Thankfully, the state recognized the importance of the port, and how it was a driving force for the region's economy, and worked with the state's congressional delegation to secure funds to restore and revitalize the port in the aftermath of the hurricane. We would not be where we are today without the financial and technical assistance that was made through Congress and the U.S. Department of Housing and Urban Development (HUD), which paved the way for recovery and for further infrastructure stability.

Geographically, the Port of Gulfport offers a proximity to inland locations adjacent to the Mississippi River, as well as to Central America and a number of South American markets. Activities at the Port including stuffing, stripping, consolidating and deconsolidation.

The Port of Gulfport currently employees 34 staff members, but hundreds of individuals are employed by the various tenants, and construction companies work on the port site. Though the port has been able to restore operations after the hurricane, officials have helped create 1,300 new jobs within three years after completion of the project.

“After the devastation of Katrina, plans were put forth to address how the port could prepare for future hurricanes,” said Daniels. “Plans were made to elevate the port and ensure adequate mitigation against storms. As part of the protection measures, the port installed approximately 202,000 tons of stone shore protection.

The restoration project has many partners, but the primary partner associated with the project is the Mississippi Development Authority (MDA), according to said Daniels.

“They are our state's lead economic and community development agency, and provide technical assistance and oversight for the project. Our tenants have also played an important role in the planning of how the new facilities would be built and designed to fit their current and future business needs.”

In 2014, the Port of Gulfport joined Green Marine, a sustainability program developed for the marine transportation industry that provides a framework for ports, terminals, shipping companies and shipyards to improve their environmental performance.

Daniels said a great deal of environmental research was performed before the restoration project became a reality.

“We can't do anything without environmental studies being done to ensure we are not damaging any wildlife and animals around the port. To get the port restoration project where it is today, extensive regulatory and environmental approvals were needed in order to receive the funding from HUD, which was released in May 2011, nearly six years after Hurricane Katrina made landfall.

“You are looking at a port that looks physically different from what it was 10 years ago. It has also completely changed from being purely reliant on containers and international cargo to one that has strategically diversified itself into the oil and gas industry, making us much stronger as we look toward the future,” said Daniels.

As part of the restoration and expansion, the port commissioned a new bulk handling facility.

“The west terminal wharf upgrade was a very important project to have completed, because it allowed for the construction and arrival of our three, new ship-to-shore gantry cranes. This project began in June 2013 and included structural and infrastructure improvements to accommodate the new cranes, which were a $31 million investment. The wharf upgrade project was completed in August 2016, and allowed for the use of Berths 1 to 6 for servicing Port tenants and customers. L&A Contracting from Hattiesburg, Mississippi completed the improvements.”

The dramatic delivery of the new gantry cranes was a monumental moment for everyone involved in the high-profile project. The Mississippi State Port Authority (MSPA) Board of Commissioners, Gov. Phil Bryant and local officials even took part in a “blessing of the cranes,” celebrating the progress made on the West Pier and those who have contributed to its success.

“The addition of the gantry cranes represents an important milestone toward the completion of the restoration project at the Port of Gulfport,” said Gov. Bryant. “The cranes will benefit the port's tenants for years to come, and help attract new businesses and generate new investment.”

“They were a significant investment in the port's infrastructure, but were also a visible sign of the progress that was being made on the port site. They are not only a sign of growth, but also insure our International Longshoremen's Association #1303 have some of the best tools to service our customers,” said Daniels.

More than 2,700 concrete piles were driven to support the building's foundation. The first slab was poured in October 2015, the same month the first set of steel was erected.

The structure is centrally located on a portion of the 84-acre expansion that was originally open water. The port completed the filling of 84 acres in the Mississippi Sound in April 2013. As part of the project, at least 330,000 cu. yds. (252,303 cu m) of unsuitable materials was dredged from the Mississippi Sound.

Through coordination with the Mississippi Department of Marine Resources, the materials have been used to reconstruct one of the nearby islands that serves as added protection against large storms.

Work also continues on a water tower project, where officials thought outside the box in their approach.

According to Nick Foto, deputy program manager, Port of Gulfport Restoration,“The new ground storage water tank came from the need to upgrade the water tower that was currently on the port site. Since we were moving it further north on the Port, bringing it closer to Highway 90 and the Island View Hotel, we wanted to make sure we got creative with the design. This was going to be visible not only to individuals driving along the Coast, but also to those visiting the hotel.

“It was decided that we would mask the water tower to look like a lighthouse. The design would also take into account the port's historical ties to the sea, and would have a working lantern room on top. The lighthouse does not serve as an aid for navigation, but is purely for visual enjoyment and softens the industrial look of the port to the seaside community of Gulfport,” said Foto.

The $4.9 million project is being completed by Wharton Smith, and should be fully complete by the end of February 2017. The contractor recently applied the final coat of paint and installed the spiral staircase.

“We also have the final pieces of glass being installed for the lantern, which will have LED lights inside, so that the colors can be changed for special events or holidays,” said Foto.

“The biggest challenges have been with the engineering side of the project. No one has designed a water tank with a lighthouse design. It's unique, and to my knowledge, no one else has ever completed or even attempted a project like this one.”

Foto noted that the engineering component to the project has been the most time-consuming part of the job.

“We had to figure out how to not only design a water tank that had all the proper pumping and structure to hold 250,000 gallons for water, but also be able to put a working lantern room on top.

“The site before construction was an empty area of the port and was part of a past fill project. Even though the location is close to water, it did not provide any challenges. There was also no need for clearing or tearing down structures.”

Foto said the elements have not been a concern during construction.

“Throughout the project, weather has not been an issue. The only delay to the overall contract was actually an unexpected engineering issue that added 10 days to the over projection completion date.”

For Foto and the construction team, work on the project has been extremely rewarding, despite the long hours.

“This project was a long time in the making, and it's with pride that we now have another visible focal point for the Port of Gulfport. We have dressed up what could have been another industrial structure on the port and given the community something that is aesthetically pleasing to those who pass by the port.”

Moving forward, the Port of Gulfport and the University of Southern Mississippi (USM) have partnered to build the Marine Research Center on the port site. In November 2016, the port officials and USM celebrated the official groundbreaking of the new addition, which is set to be completed in early 2018. The facility will serve as the marine operations and research facility for USM's School of Ocean Science and Technology.

“The construction of the Marine Research Center is an opportunity for us to continue our diversification efforts and further develop a partnership that is a direct result of the state's investments in the Blue Economy,” said Daniels. “With the help of USM, the port, along with the City of Gulfport, will serve as the epicenter of oceanographic research in the Gulf of Mexico.”—CEG