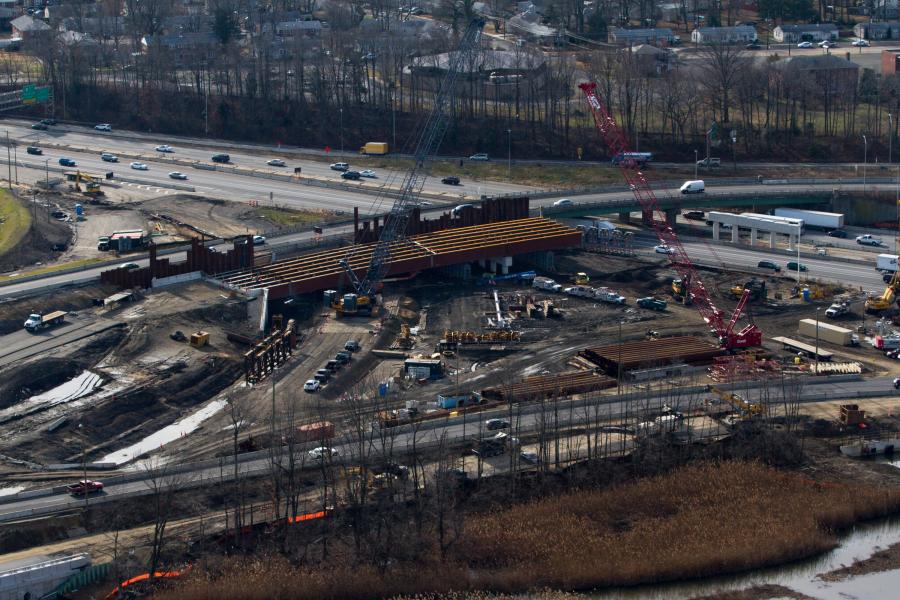 Work on the third contract of the New Jersey Department of Transportation's Direct Connection project has begun, inching the massive job just a bit closer to its projected 2024 completion.

The $900 million project is designed to improve safety and reduce traffic congestion at the intersection of I-295, I-76, and Route 42.

In its current configuration the I-295, I-76 and Route 42 interchange does not provide a direct connection for I-295 through traffic, according to NJDOT.

According to a press release, “The existing interchange requires motorists to reduce speed in both directions of I-295 to safely negotiate ramps with 35 mph speed limits. In addition, drivers also must compete with vehicles entering from Route 42 and I-76, causing dangerous conditions. Being a major artery for Philadelphia commuter traffic via the Walt Whitman Bridge, and a connection to the southern New Jersey shore, Route 42 and the Atlantic City Expressway, this interchange is the busiest in the region.

“Due to the high volumes of traffic, low main line design speed, complex configuration of the interchange and weaving movements, a high incidence of motor vehicle accidents often occur.”

Because of the size and complexity of the project, it was divided into four construction contracts. Construction began in the winter of 2013, but plans for the project have been in the works since 1998.

The project includes 12 bridges, of which four have been completed, and spans 1.5 mi. through Camden County.

One of the biggest tasks crews will face in completing contract 3 is installing an estimated 30 to 50 beams, each 220 ft. by 100 in., to construct three spans of the new section of I-295.

“The mainline is going to be elevated with 10 foot beams with an elevation of 50 feet,” said John McCleery, project manager. “Coming up in the next year and a half, we're getting them erected and in place and completing all the advance work to build the piers and abutments. We are on schedule to get the beams erected. Once we get those erected I don't see anything stopping us from plowing right through.”

Another challenge is working with the different soil types.

Because pile driving can cause a great deal of noise and vibration and the project runs through numerous residential areas, crews are drilling the pilings.

“When you drive a pile it's like a large hammer,” McCleery said. “The drill is a lot less impactful than driving piles. In contract 2 we drove 500 pilings for large walls, bridges and retaining walls. There's a lot of subsurface work that requires, in normal construction, pile driving. Here we're doing drill shafts to minimize vibration and noise. You drill down and put in a steel cage and pour concrete. That provides the support for the structure.”

Crews also must complete the work with as little interruption to traffic as possible, no small feat in such a highly congested area.

“We don't have the luxury of taking lanes out of traffic,” Schapiro said. “We have to maintain lanes while doing construction. Much of the work has to be done at night. Approximately 392,000 vehicles go through the interchange of 295 and Rt. 42/ I 76. It's a challenge, doing a massive project in a way that allows the daily commute to take place.

Here's a look from NJDOT at what each contract entails:

• Contract 1, awarded to PKF Mark V, began in the winter of 2013 and was completed in November 2016. Major improvements made under this contract include the reconstruction of existing bridges at the I-295 crossing over Essex Avenue; Bell Road over I-295; and Creek Road over Route 42. In addition, a temporary ramp was constructed to eliminate the weave between Route 42 north and I-295 north traffic for the duration of construction and a new ramp from I-295 north over Route 42 was built.

• Contract 2, awarded to Conti Enterprises, began in June 2014 and is expected to finish in 2019. In July, the new bridge and ramp from I-76 east to I-295 north opened. Demolition of the old structure adjacent to it is under way. Other work completed on Contract 2 includes the realignment of I-295 south leading to Al-Joe's curve and the ramp to I-76 west to Philadelphia, as well as building noise walls along I-295 north and south. Upgrades to the storm water management also were completed on I-295 from White Horse Pike to the vicinity of the Bell Road Bridge. I-295 south is scheduled to be paved this fall.

In addition, the piles to support the new ramp from I-295 south to I-76 east/Route 42 south are 80 percent complete and the remaining work on this ramp will continue in Contract 4. With this work completed, the final phases of Contract 2 can begin, namely construction of a piece of the new I-295 Bridge that will go over the ramp from I-76 east to I-295 north and the remaining retaining walls adjacent to it. This work will continue into 2018, and wrap up in 2019.

• Contract 3, awarded to South State Inc., began in April 2017 and is expected to finish in December 2021. The main focus of this contract is completing the new I-295 mainline direct connection over I-76/Route 42. Work is about to begin on the shaft foundations for these bridges. In addition, work has begun on building a temporary Browning Road Bridge to allow for the construction of a new Browning Road Bridge. The contractor also has been excavating for future retaining walls, along Route 42 north and south. Work in these areas will continue over several months.