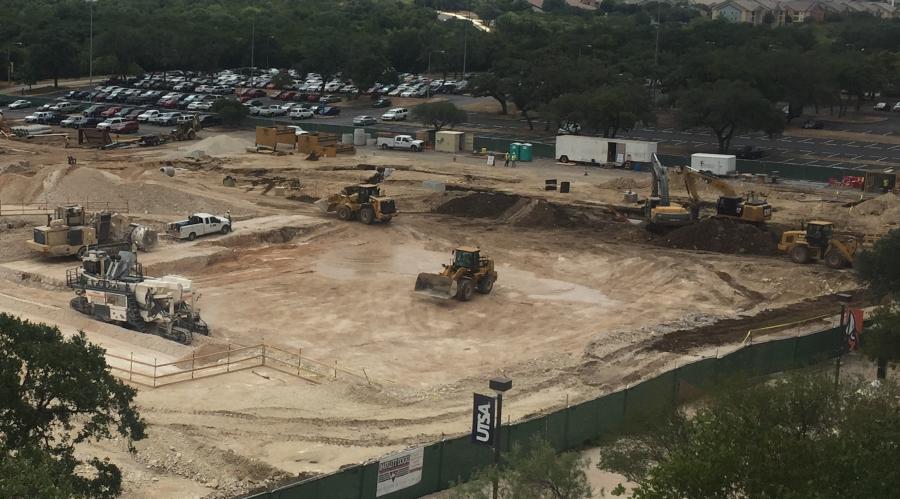 The school began constructing a 153,000-sq.-ft., four-story Science and Engineering Building (SEB) off Bauerle Road and Key Circle earlier this year with a finish date set for May 2020.

What promises to be a sparkling new addition to an already beautiful campus is currently rising from a site on the eastern edge of the main campus of the University of Texas at San Antonio.

The school began constructing a 153,000-sq.-ft., four-story Science and Engineering Building (SEB) off Bauerle Road and Key Circle earlier this year with a finish date set for May 2020.

The $95 million project, the largest in school history, will house laboratory, classroom and meeting space designed to support students and researchers in brain health, mechanical and chemical engineering, biology and chemistry.

According to a UTSA official helping oversee the project, the architecture of the building is contemporary and will blend in with other buildings around it.

But the SEB's design is most notable because it will utilize a large amount of glass both on the exterior and interior to literally give transparency to the work within.

“We have designed it so the glass allows students from other disciplines and majors, as well as visitors, to see into the laboratories from the hallways, a concept that is called 'Science on Display',” explained Robert Espinoza, director of capital projects at UTSA.

By using glass to showcase on-going lab work, the school hopes to foster better interaction among students and give them the chance to connect with those with different interests.

“It also should be a good recruitment tool when we bring high school students in to tour the facilities, as well as showing the kids in some of the summer camps what we have going on here,” Espinoza said.

Students and visitors to the building will enter a three-story atrium on the front of the SEB, which faces west. Espinoza said most of the exterior glass will be located here.

Although that could potentially direct too much heat and light through the glass and into the building, he was quick to point out that another science building across from it will provide shade for the SEB in the critical afternoon and evening hours.

Phase 1 of the SEB project started in the spring with the excavation and utility work. Phase 2 is scheduled to start in December or January on the building construction itself with a target date for completion of May 2020.

The first shovel hit the ground in May and soon trenchers and milling machines started work. Espinoza said that a fair amount of rock was quickly pulled up so that by June, the entire footprint of the building had been excavated. The deepest end of the excavation was about 20 ft., he added.

With that done, the utility work began, a step that was timed to coincide with summer vacation for UTSA's students.

“We knew that would be an ideal time to take over the site and start trenching for our sanitary sewer, storm water, electrical service and duct bank lines — those areas outside of the building construction footprint,” Espinoza said. “Unfortunately, it has proved to take longer than the three months the students were out, so now we have rearranged our student pedestrian pathways to get them safely and efficiently around the work. We had initially taken over a lot of the student parking area adjacent to the site, but we have since given some of that back now that school is in session again.”

After a slight pause in late August to pump out all the rainwater at the SEB construction site after San Antonio was brushed by the remnants of Hurricane Harvey, work resumed on utility installation. Espinoza said that work would last through the fall, along with building the piers and foundations.

The winter months will see Bartlett Cocke's crews turn their attention to the construction of the SEB itself, which will continue for two more years.

Espinoza estimates maybe about 75-80 people are working at the site currently, with many of them being framers, earthmoving-equipment operators and concrete workers on the duct banks.

When work expands after the first of the year, he figures as many as 250 to 300 people could be on site at the busiest time. The entire construction operation, he said, is about the size of three football fields.

A New Blend of Materials Being Used at UTSA

Opened in 1969, UTSA now has approximately 29,000 students and is consistently ranked among the top 100 colleges in the country.

Its campus was designed so that its buildings are situated along paseos, or large walkways, featuring flagstones and lined with trees and landscaping. Espinoza said the paseos mimic the walkways along the city's famed San Antonio River.

UTSA's paseos run east-west and north-south, he explained, with Sombrillo Plaza, a large open area, located where the paseos intersect. The new Science & Engineering Building is located at the southeast corner of the plaza, with other structures on either side of it.

Espinoza said that the school started with stone and stucco on its buildings' exteriors, before introducing brick into newer structures.

The SEB, though, will be the first structure on campus to utilize a blend of stone and brick, a design that will become standard for future UTSA buildings.

“Our other nearby science buildings are made of stone,” Espinoza said. “and we also have built a new administration facility and a 900-bed housing complex, both of which are brick only. As an architect myself, I think this new science building's combination of materials is very interesting design-wise. When you add in all the glass with the stone and brick, the SEB will be a very attractive structure.

“Then, too, because it is in the science sector of the campus, it needs to blend in with those structures. We wanted it to look alike, but different,” he said with a laugh.

Funded and Built for World-Class Research

The new SEB also will give University of Texas at San Antonio much more room to conduct classes and carry out much-needed research programs.

UTSA's research expenditures total nearly $60 million annually, with about half of that within the College of Sciences. Researchers and students focus on neuroscience, nanotechnology, stem cells, medicinal drugs, infectious diseases and vaccine development, where the school is tops in the nation in undergraduate education and research.

To continue that high standard, UTSA and the Texas State Legislature decided to fund a new facility through tuition revenue bonds in 2015.

When finished, the SEB will house various departments that are currently located in other nearby buildings. Chemistry and biology will move from their aging labs to facilities on the second and third floors, respectively. The current engineering building across the paseo will remain active, but the SEB will allow that department to expand its space on campus by housing it on the new structure's first-floor.

That will include 17,000 sq. ft. dedicated to “makerspace”, a gathering area where people with similar engineering and technology interests can collaborate on projects.

“Essentially, it is a huge workshop where students can build various materials for their engineering projects,” Espinoza explained, “and it has all the glass around it so people can see what they are building.”

The top floor will be the home of UTSA's chemical engineering and Brain Health Initiative programs.

A special two-story space also will be built to house a distillation column for chemical engineering research. These types of columns separate liquid chemicals and are routinely used in the petrochemical industry. The UTSA column will help train students studying for careers in industrial chemical engineering.

UTSA's main campus is located just to the north-northwest of downtown San Antonio in a popular area of town near the intersection of Interstate 10 and the Texas Highway Loop 1604. A new mall and Six Flags Fiesta Texas are each just across the loop from the university in an area experiencing steady growth and development.

“We have a lot of space on our campus in which to work and we are building the SEB on the edge of campus,” he said. “There is also plenty of room for future projects, as well.”