The United States is celebrating the bicentennial of this 363-mile-long 19th Century engineering feat, which created a navigable water route connecting Albany, N.Y. 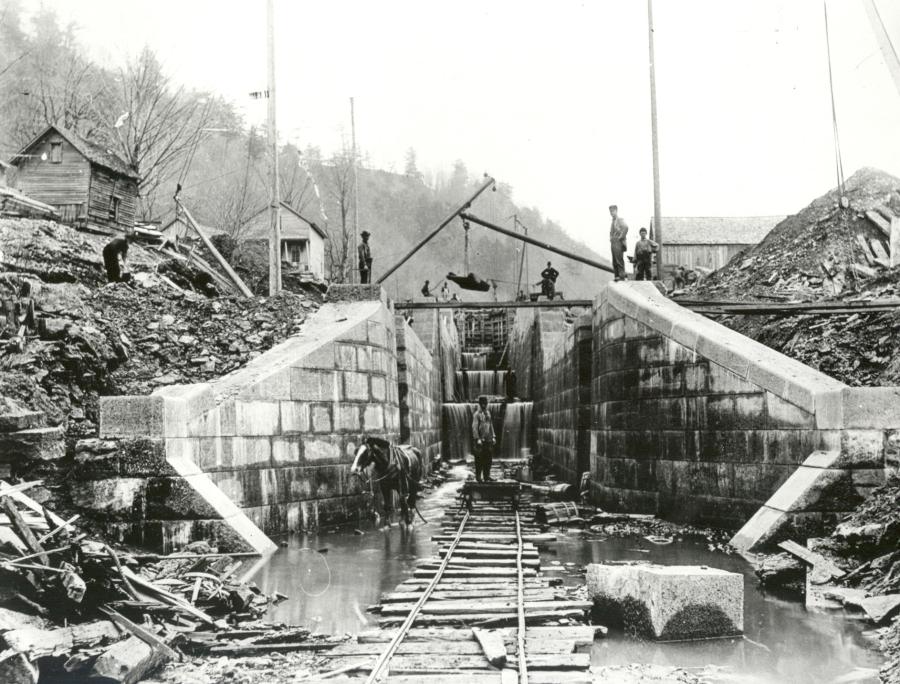 Canal lock construction in the mid-1800s in Boonville, N.Y.

I've got a mule, her name is Sal

15 miles on the Erie Canal…

Low bridge, everybody down

Low bridge, for we're coming to a town

This song is one of the many echoing through the many generations since men dug shovels into earth in Rome, N.Y., on July 4, 1817, in the groundbreaking of the nation's first great infrastructure project, the Erie Canal. The United States is now celebrating the bicentennial of this 363-mile-long 19th Century engineering feat, which created a navigable water route connecting Albany, N.Y., on the Hudson River in the East with Buffalo, N.Y., on Lake Erie to the West.

Thousands of men, including many Irish, German and Welsh immigrants wielding shovels, pick axes and improvised earthmoving or tree-felling equipment, completed the canal in 1825 after eight years of backbreaking labor through the wilderness. The canal waterway, more cost- effective than the dirt, often-muddy dirt roads used by horse and wagons, opened the country west of the Appalachian Mountains to a mammoth upsurge in settlers and trade.

A barge could now cross the state in six days compared with several weeks by horse and wagon. The new canal made New York City, at the mouth of the Hudson, the nation's financial capital and the busiest port of the country. It also created boom towns, including Utica, Rome, Syracuse and Buffalo.

Before the Erie Canal, it cost $100 per ton to haul goods over rutted, often muddy, dirt roads. The canal cut this to $10 per ton. Illustrating the success of this new infrastructure: in 1829, barges carried 3,640 bushels of wheat eastward from Buffalo. In 1841, they carried one million bushels. (Excess grain was often used to make whiskey, which was so plentiful that a barge driver might consume one quart per day.)

The canal also carried packet boats which were as long as 80 ft. These could carry more than 80 passengers who had to duck for low bridges, and who ate at a long central table which folded up to form sleeping berths.

Success carried a price. At least 1,000 workers are thought to have died cutting through the forest and digging through the earth to make this canal, the world's longest at the time, happen.

The story goes that President Thomas Jefferson scoffed at the idea of the canal, calling it “a little short of madness” and refusing federal support. President James Madison said the idea was “impractical at best.” He vetoed a bill that would have also provided some federal funding.

The canal became a New York State project where grit and determination overcame the many obstacles.

Jesse Hawley, a grain broker in western New York, is credited with arousing interest in the canal by spotlighting its advantages in 14 essays, which he wrote for the Genesee Messenger while in a Canandaigua, N.Y., debtors prison in 1807. His articles, under the pen name of Hercules, envisioned a water route connecting Lake Erie with the Mohawk River above Albany. James Geddes, a self-taught surveyor, studied the proposed route for the New York legislature and pronounced it feasible in 1808.

Sen. De Witt Clinton, former mayor of New York City (and a future governor), was an enthusiastic backer following a month-long expedition as part of a seven-man commission, which surveyed the route in 1810. In 1815, following the War of 1812, they petitioned the legislature, calling the canal “without parallel in the history of mankind.” More than 100,000 New Yorkers signed a petition supporting construction. The legislature passed a bill for building the canal in 1816. It authorized $7 million, which was equivalent of one fourth of the federal budget and was the largest public works project in the young nation's history.

Doubters called the undertaking “Clinton's Folly,” but he foresaw its revolutionary impact on the entire country. Before the end of the century, he declared, the entire island of Manhattan would become the emporium of commerce “covered with inhabitants and replenished with a dense population.”

The canal construction began with the groundbreaking on July 4. Citizens gathered around a wood stake labeled “No. 1 True Canal Line.” After canal commissioner Samuel Young lauded the project as “one of the grandest objects that ever has and perhaps ever will grace our nation,” a cannon boomed. Magistrate John Richardson, who was also a contractor, plunged a spade into the earth. This was followed by a frenzy of flying dirt as everybody began digging. A few days later, several dozen workers began the real big dig — one group digging east, the other west. No modern bulldozers or excavators, just men, shovels, pick axes, oxen … and grit.

The canal builders followed a path that survey teams had marked in 1816 using 66-ft.-long chains to mark where to place stakes. Readings of elevation, using levels, had to be precise within a fraction of an inch. Heading west from Rome, the initial 4-ft.-wide path cut through deep forest, thick brush, scrubland, quicksand and swamp, little of which had been cleared or settled.

The first workers were often Welsh or German immigrants. These were joined by 5,000 Scotch-Irish immigrants, mostly Roman Catholic, from Northern Ireland. Some local farmers and African Americans also joined in. According to some estimates, about 15,000 men worked on the canal. About 1,500 Irishmen worked at the Lockport area. Malaria reportedly killed about 1,000 men in a 30-mile stretch of Marshland west of Montezuma. Workers also contended with swamp snakes, poisonous plants, flies, mosquitoes and bedbugs.

The men ate smoked pork and stale bread, supplemented by some game from the Oneida Indians who still lived in the area.

After their 1810 survey, Clinton and the other commissioners designed the canal as an inverted trapezoid 40 ft. wide at the top, 28 ft. wide at the bottom and 4 ft. deep. Locks would be 90 ft. long and 12 ft. deep, raising or lowering a boat 8 ft. (On the "downhill run from Lake Erie to Albany, the water level dropped one foot per mile.)

The canal was built in three sections. It included 18 aqueducts crossing ravines and rivers, and 83 locks with a rise of 568 ft. from the Hudson River to Lake Erie. Horses and/or mules pulled the boats from a 10-ft.-wide towpath along the bank. Mule drivers were called “hoggees.”

One of the biggest obstacles was a rock cliff more than 70 ft. high near Niagara Falls. Engineer Nathan Roberts conquered this through a series of five double locks. Each of these two-way locks provided one lane for boats moving in one direction and another for the opposite direction. Called the “flight of five,” this feat gained world attention.

The aqueducts crossed rivers, creeks and deep ravines. The one across the Genesee River at Rochester, more than 800 ft. long, was built of huge stones, each quarried and shaped by hand.

Canal workers toiled 12 to 15 hours a day. Besides shovels, they used horse-drawn blades, called slip scrapers, to move earth. (These were early tries at bulldozers.) They lined the sides of the canal with stone set in clay, and lined the bottom with clay. They felled trees by throwing ropes over the tops and winching them down. To remove stumps, they used oxen which pulled ropes wrapped around a center wheel. Hundreds of German masons worked on the Niagara Escarpment.

The full canal was completed on Oct. 26, 1825. Marking the occasion, Clinton led a flotilla of boats on the canal from Buffalo to Albany, and then south to New York City on the Hudson. Cannons boomed in salute every 10 miles. More than 100,000 cheering people crowded the shores as Clinton's boat, the Seneca Chief, reached Manhattan.

Clinton carried a keg of water from Lake Erie. After a brief speech to assembled dignitaries on the prow of his boat, he poured the water into the Atlantic. The ceremony, symbolizing the successful eight-year effort, was called “the marriage of the waters.”

But today, the song, and the memories, remain.

Low bridge, everybody down

Listen to the rest of the Erie Canal song here: