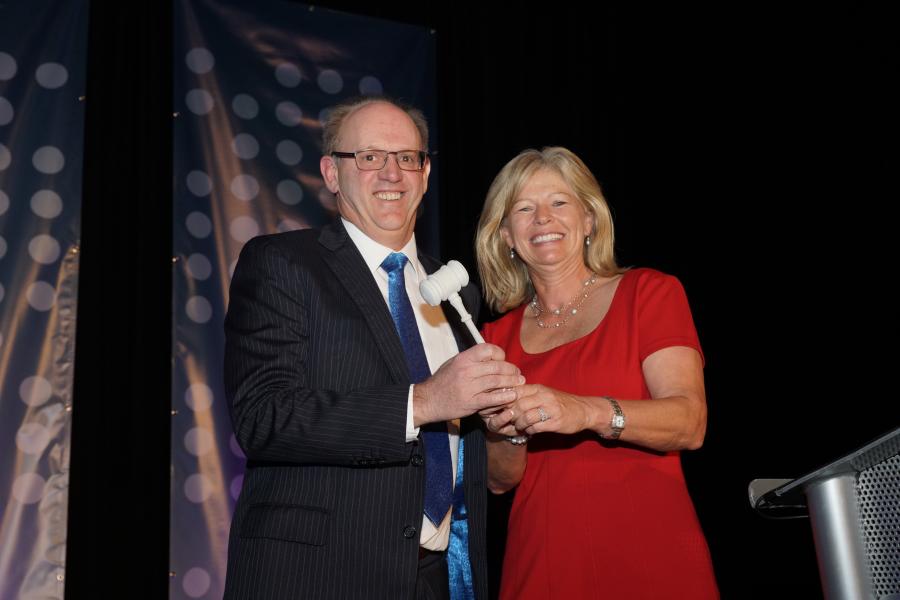 The American Concrete Pavement Association has named Chuck Niederriter, chief operating officer of Golden Triangle Construction Company, as its 2018 chairman of the board of directors.

Niederriter became the 55th person to serve as ACPA chairman during a ceremony at ACPA's annual meeting, where he accepted a ceremonial concrete gavel from 2017 Chairperson Lori Tiefenthaler, senior director of marketing for Lehigh Hanson Inc.

“The mission for 2018 will be for the national organization to work closely with the ACPA-affiliated chapters to provide increased service and assistance to our governmental partners at the state and local level,” he said. “This is in direct support of decisions-making about pavement design and selection process for our highway systems.

“This is of great importance today considering the heightened awareness nationally for much needed improvements to the infrastructure in the United States,” he said. “The transportation departments across the country are asking for help, and we are prepared to step in!”

During his acceptance speech at ACPA's 54th Annual Meeting, Niederriter said, “Our clients expect our projects to last a generation. Unfortunately, the measure of success for our product is that often goes unnoticed for 50 years. As such, we need to celebrate our successes.”

Addressing an audience of 285 association members, affiliates, and other guests, Niederriter said “As we move forward in 2018, I want to encourage, challenge and invite you to 'get into the trenches.' I know your ACPA national and chapter staff will be there, and I promise you I'll be right there with you to push for concrete pavements and celebrate our victories, too!”

Niederriter's comments included a poignant story about the founding and evolution of Golden Triangle Construction, where he began his career as a project engineer. During his approximately 32-year tenure, he has overseen tremendous growth of the company, he said, recalling his first project with the company, a new taxiway and cargo apron at Pittsburgh International Airport. Today, the company as an industry leader in Pennsylvania, West Virginia and Ohio.

Chuck Niederriter graduated from the University of Pittsburgh's School of Engineering in 1982, and has worked at Golden Triangle Construction since 1986. He serves as chief operating officer and is responsible for the overall day to day operations.

In addition to his position at Golden Triangle, he also serves in several volunteer leadership roles, including vice president of the Associated Pennsylvania Constructors. He also is past chairman of the ACPA-Pennsylvania Chapter and past-president of the Constructors Association of Western Pennsylvania (the local chapter of the Associated General Contractors of America); he also has served on numerous other boards of directors.

Accelerated Bridge Construction Will Be Used On I-80, I-215