After Long Debate, Work to Begin on Eisenhower Memorial

A groundbreaking ceremony marked the start of the project, which has been plagued for years by a bitter fight over the memorial's design and aesthetics. 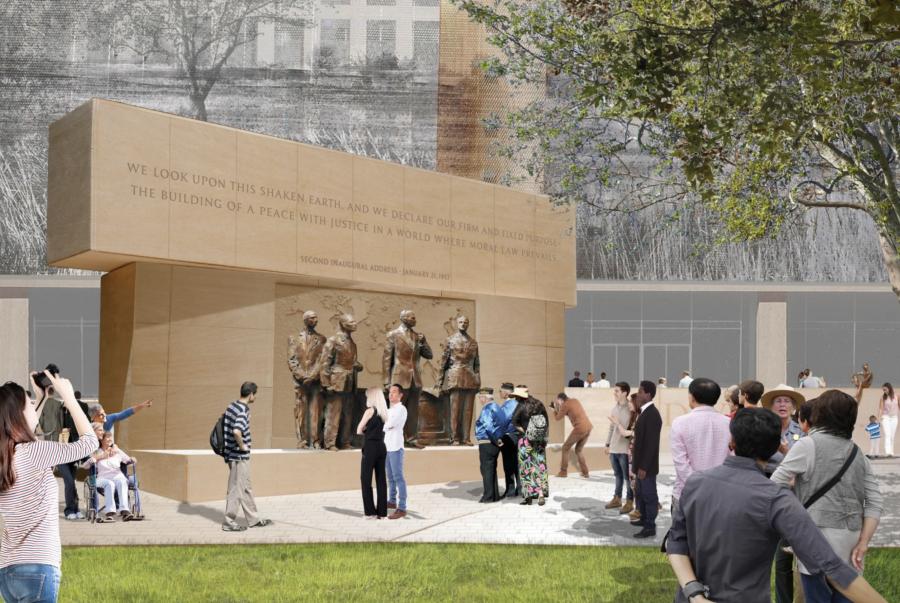 The project is estimated to cost up to $150 million, the majority of that from federal funding. (Gehry Partners LLP photo)

WASHINGTON (AP) After years of public controversy and debate, work is finally set to begin on a massive memorial to President Dwight Eisenhower.

A groundbreaking ceremony marked the start of the project, which has been plagued for years by a bitter fight over the memorial's design and aesthetics. Speakers at the ceremony included members of the Eisenhower family, architect Frank Gehry and Kansas Senator Pat Roberts.

Gehry, who designed the Walt Disney Concert Hall in Los Angeles and the Guggenheim Museum in Bilbao, Spain, was commissioned to design the memorial. But Gehry's original plan was strongly opposed by three of Eisenhower's grandchildren and the organizing commission was hit by multiple resignations.

Gehry's vision would transform a four-acre space on Independence Avenue directly in front of the Lyndon B. Johnson Department of Education Building.

Plans call for a series of columns and multiple statues depicting the 34th president and World War II military commander at various stages of his life and career. An enormous woven metal tapestry would depict the French beach at Normandy, where Eisenhower's troops launched the D-Day invasion. Eisenhower, who was elected president in 1952 and served two terms, died in 1969.

At one point, Gehry threatened to take his name off the project if too many alterations were made. Eventually, after Gehry made his own changes to the proposal, the Eisenhower family announced their support last year, enabling the project to go forward.

Despite the approval of the Eisenhower family, strong criticism of Gehry's vision remains. A group called the National Civic Art Society remains deeply opposed, saying the Gehry design is out of step with the tone of Washington and its monuments.

The conservative magazine the National Review also has been a vocal critic; a September article in the magazine called Gehry's design “a repellent monstrosity.”

When the memorial is completed, Eisenhower will join an elite club. George Washington, Thomas Jefferson, Abraham Lincoln and Franklin Delano Roosevelt have prominent memorials in the nation's capital.