After This Irving Contractor Landed Its First Job, 'They Just Kept Coming' 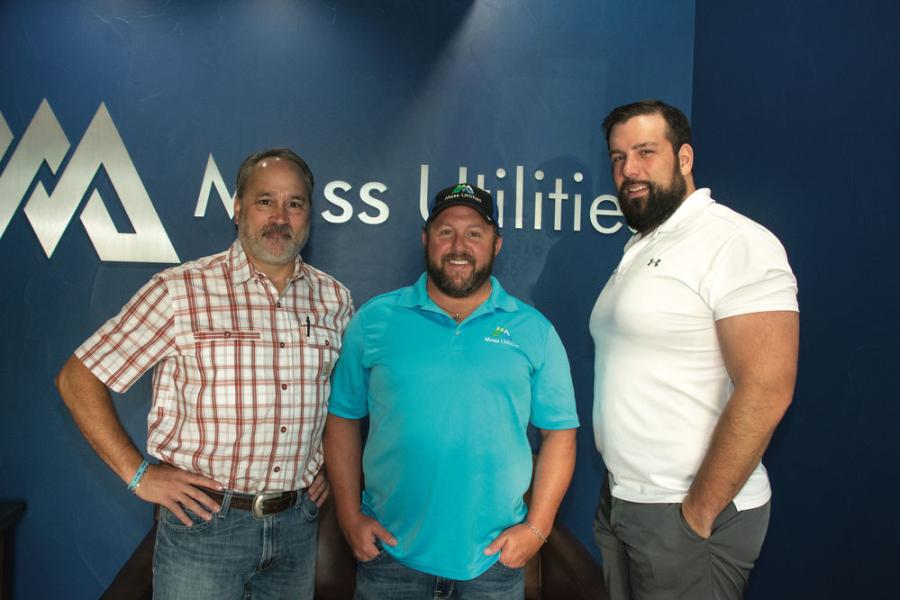 (L-R): Pat Farquharson, Kirby-Smith Machinery territory manager meets with Moss Utilities Owners Case Whitfield, vice president, and Garrett Moss, president, at their office in Irving, Texas. “Pat and Kirby-Smith in general have been great to work with,” said Whitfield. “I feel like I can call him anytime of the day or night and get a response.”

Nearly all new construction business owners experience the anxiety of securing that first job, even those with extensive backgrounds that give them plenty of experience to tackle almost any size project.

“It took a while, and there was a period where we were kind of scared that we weren't going to land any work,” admitted Garrett Moss, president of Moss Utilities LLC. “We knocked on doors and put in a lot of bids before the first one popped. Once it did, they just kept coming.”

Moss Utilities' first assignment involved the installation of a fire hydrant, approximately 60 ft. of fire line and a riser inside a vault. Two men completed the $35,000 project.

“That was our first crew,” recalled Case Whitfield, vice president of Moss Utilities. “From there, we went to another site, then another and so on. Once customers saw our capabilities, they started asking us to do more, which led to growth. We now have 12 mainline pipe crews and three punch-list crews. We also have started a separate business, Moss Excavation, which opened in October 2017.”

Moss Utilities specializes in turnkey underground pipe installation and associated structures for water, storm drain, sewer, duct banks and fire lines. The company handles nearly every aspect itself, with very little subbed out. It started with small commercial work, but the firm now also does private, multi-family subdivision and public works projects with a staff of nearly 170.

“Both Garrett and I have a solid background and history in utilities,” said Whitfield. “My dad had his own residential plumbing business. I worked for him for several years, and I'm a master plumber. Garrett is the fifth generation in the industry as his family has been in the business since the early 1900s.”

“History and experience are not a guarantee that you will be successful, though,” added Moss. “We marketed ourselves diligently at the start, and we still do so through banners on our jobsites and with our logo on equipment. But, our best marketing tool is providing quality, professional service. That has gained us several repeat customers in a relatively short time.”

All of Moss Utilities' growth came in just a little more than a year. Moss and Whitfield founded the Irving, Texas, business in September 2016 after working together for another company. Co-worker Tommy White joined them shortly thereafter as a foreman and is now general superintendent. Additional key individuals include Richard Fleissner, chief financial officer; Brad Moss, Mike Smith and Sid Hines, estimators; as well as Shawn Lain, equipment manager.

“There was a niche in smaller commercial jobs in the Dallas-Fort Worth area that existing contractors were not able to fill,” Moss said. “The metroplex continues to expand rapidly, so there is a lot of opportunity. We decided to go out on our own and fill that void, and it's paid off rather well.”

White said that Moss Utilities has 12 to 16 jobs in various stages of development going at any time. Its largest to date was Caraway, a 160-lot subdivision with 10,000 ft. of water and sewer line as well as 5,500 ft. of storm drainage line.

“Those are fairly typical quantities for that type of job,” White said. “Subdivisions tend to be that much and maybe more because we put in the main lines and branch off of those for services to each house. We did one in Southlake that had 40 good-size lots.”

With an abundance of opportunities in the Dallas-Ft. Worth area, Moss Utilities has stayed fairly close to home, but the owners consider the firm's territory to be as far as an hour-and-a-half drive from the metroplex.

“If there is a project farther out, we will consider it,” said Whitfield. “Customers have asked us to look at work in Houston and Austin. We haven't really been able to commit to that yet, but we certainly are not ruling out anything.”

Members of the Moss Utilities team used Komatsu equipment at their previous company, so it was natural for them to rent excavators and wheel loaders through Kirby-Smith Machinery. They decided to start with rental purchase options, later converting several machines into purchases.

“Our territory manager, Pat Farquharson, helped us find machines. Komatsu Financial really stepped up with financing options, so we were able to acquire equipment and build a fleet rather quickly,” said Moss. “Komatsu equipment has good power, it's durable and holds its resale value. Komatsu is also competitively priced, so we're getting the most bang for our buck.” 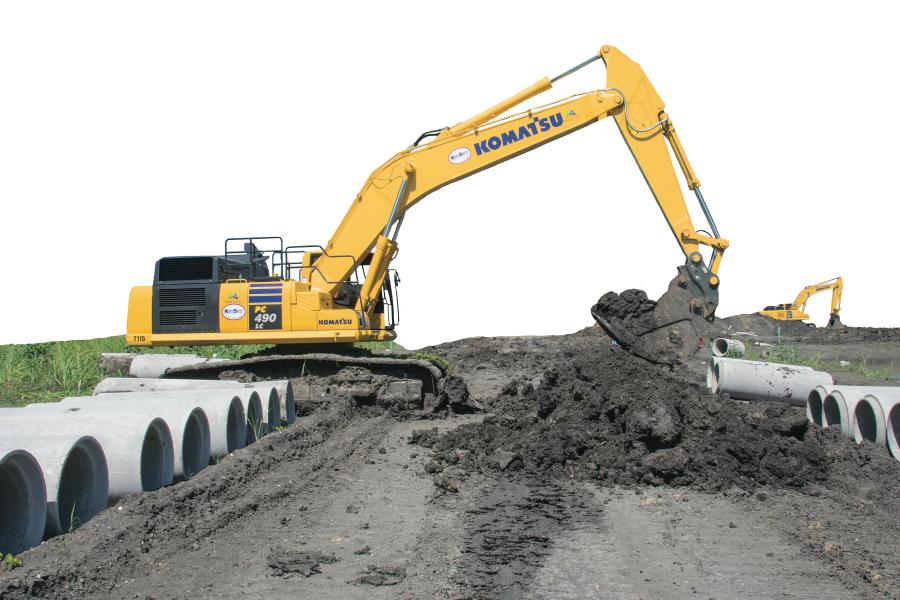 Moss Utilities gets versatility from its Komatsu equipment as well. It uses excavators ranging from a tight-tail-swing PC138USLC to a 104,000-lb.-plus PC490LC. Additionally, the company has WA270 and WA320 wheel loaders.

“Komatsu excavators are our mainline machines,” explained Lain. “We dig, set pipe and structures, backfill and compact with them. The PC138 is especially handy because it allows us to get into tight spaces and still be very productive, without the worry of a large counterweight swinging into an obstruction.

“The loaders are multi-purpose, too,” Lain added. “We backfill, move pipe and materials as well as load trucks with them. They are highly maneuverable and easy to operate.”

All of Moss Utilities' Komatsu equipment is Tier IV, so scheduled maintenance is covered complimentary under the Komatsu CARE program for the first three years or 2,000 hours. Kirby-Smith tracks the machines' hours and location with Komatsu's KOMTRAX telematics system.

“When a service is due, they call me and set it up at a convenient time to take care of it,” said Lain. “That lets us concentrate on production and gives us peace of mind knowing that the intervals are done on time by certified technicians. I track the machines with KOMTRAX for hours, idle time and other critical information. It's a helpful management tool.”

“Pat and Kirby-Smith in general have been great to work with,” added Whitfield. “I feel like I can call Pat anytime of the day or night and get a response. They have certainly taken excellent care of us.”

Whitfield said that Moss Utilities blew its first-year projections out of the water. He and Moss expected the company to be roughly half the size it is at this point.

“We quickly realized accelerated growth was necessary in order for us to maintain our work load and relationships with customers,” said Whitfield. “Right now, we're slowing the pace, catching our breath and planning for what's ahead.”

Moss said the future likely holds additional expansion, not only in terms of size but also markets and services.

“Diversity is critical, because companies that do one type of project become really good at it but tend to be pigeon-holed,” Moss said. “We have the experience to move into other work areas like highway projects. The possibility is there for us to expand into general excavation. By offering more, we can better serve our clients and further improve relations with them. The sky is the limit as far as we are concerned.”