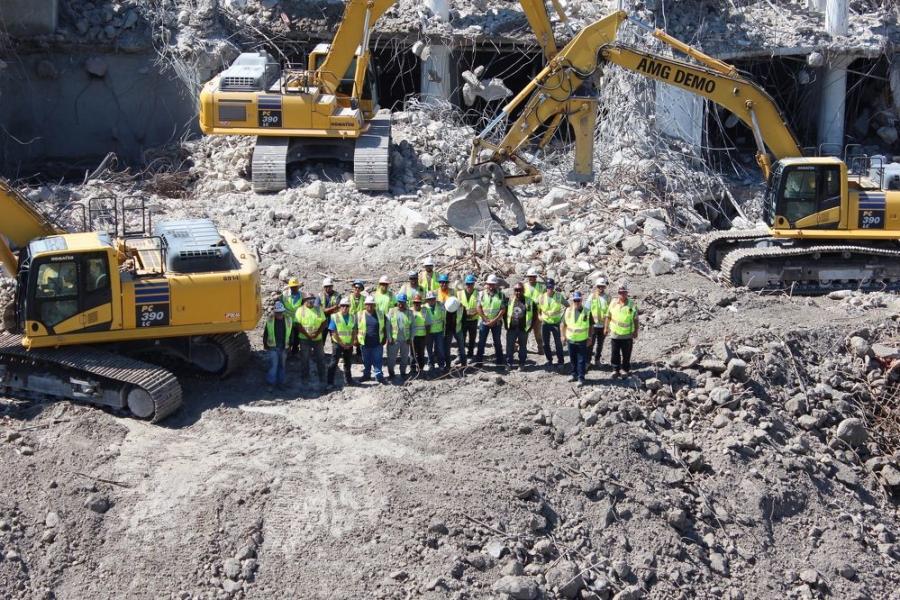 AMG has approximately 150 employees. “We like to keep people and grow from within,” Gafa Jr. said. (AMG Demolition & Environmental Services Inc. photo)

Not every family business is small. When AMG Demolition and Environmental Services, Inc. was founded in 2002 by Mike and Annette Gafa Sr., the company employed 10 to 15 people. Today, the company has about 10 times the number of employees.

AMG has grown in scope as well as personnel. Initially launched with a focus on abatement and building demolition, the San Diego-based company has expanded to cover asbestos, lead and contaminated soil remediation. In addition, noted Mike Gafa Jr., they have increased their emphasis on interior demolition. "Our main focus is interior or selective demolition, which is removing — by hand — material [down] to the structural shell. There's more reward vs. risk with this kind of work." 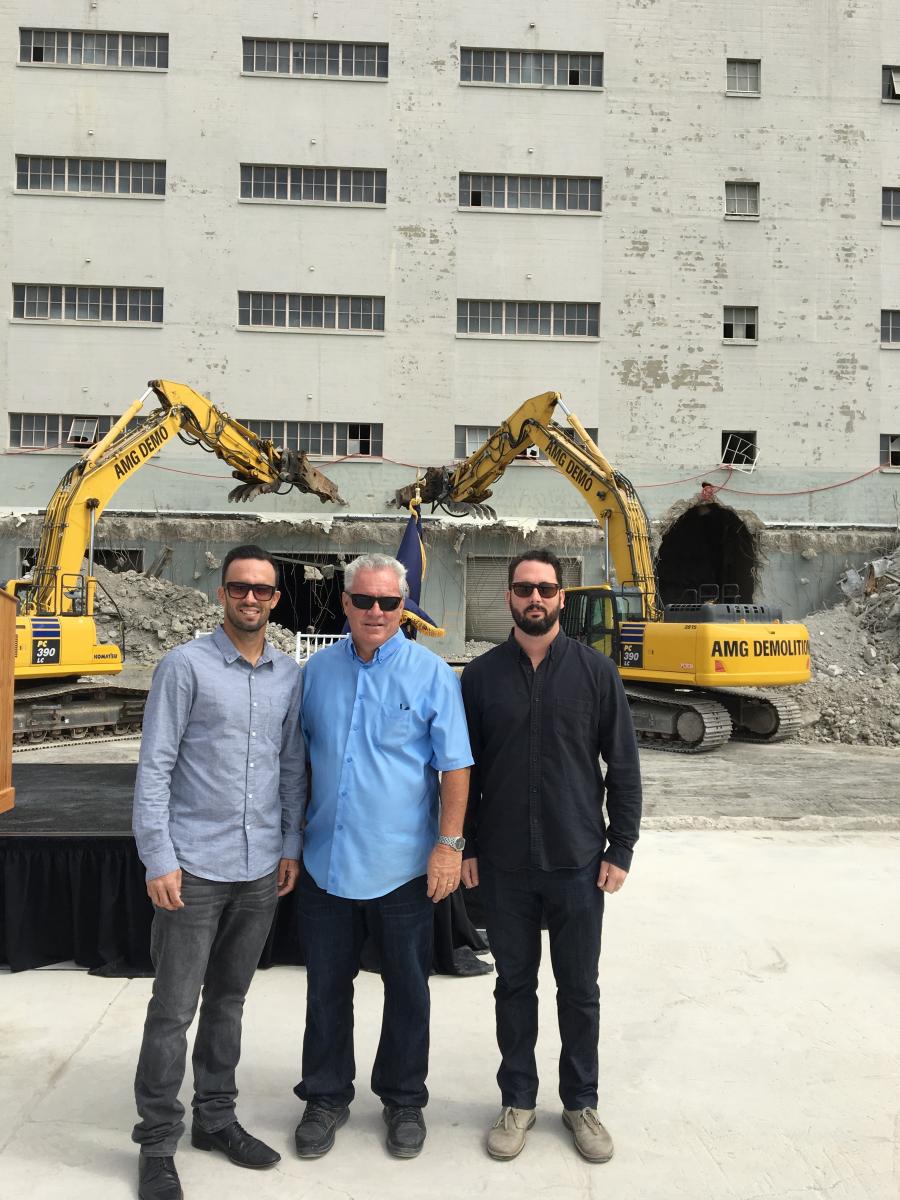 Applying a personal touch to this literal hands-on approach, AMG specializes in doing the "tough, niche jobs others don't take on," Gafa Jr. said. "We're not trying to be the biggest; we're trying to be the best."

That attitude, along with a record of completing projects on time, has led to a lot of referral business. "We get a lot of work by reputation," Gafa Jr. confirmed, estimating that 95 percent of the work this non-union shop gets comes from referrals.

They serve the greater Southern California area, from the international border to Los Angeles County, but the majority of their business comes from San Diego, which Gafa Jr. described as a niche market heavily reliant upon reputation.

While he believes their reputation and referrals are due to their resolve to service their clients, and to their work ethic, another reason AMG gets a lot of business is their turnkey tactic. "It saves cost and time," Gafa Jr. explained, "and provides a seamless transition."

AMG conducts structural and interior demolition, general contracting and earthwork and mass excavation. Licensed employees perform asbestos and lead remediation. Certified personnel perform abatement of hazardous materials and contaminated soils. Although they continue to perform some earthwork, it's separate, he said. "You need the right equipment."

Referrals aside, AMG does bid some public work. Their location lends itself to military work as well, such as the San Ysidro border crossing, one of the biggest and most challenging projects AMG has completed.

The San Ysidro Land Port of Entry on the Mexico-U.S. border is the busiest land port in the world. Its outdated 30-year-old facility was unable to keep up with processing an average of 50,000 northbound vehicles and 25,000 northbound pedestrians each day. With an expected increase in vehicular traffic of as much as 70 percent by 2030, the San Diego Association of Governments' study predicted $8.4 billion in lost revenue as a result of increased wait times at the border due to processing capacity not keeping pace with traffic volume. 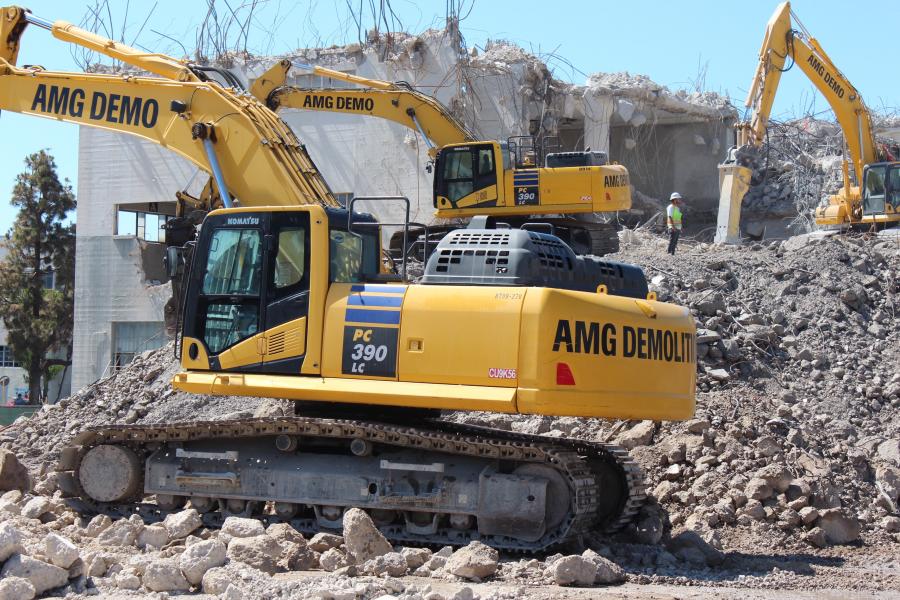 Before a new facility could be built and additional lanes of traffic added as part of a three-phase project, AMG was contracted to demo 100,000 sq. ft. of existing building and perform asbestos remediation, lead abatement and substantial earthwork, handling 80,000 cu. yds. of soil and doing site grading.

"San Ysidro was very difficult," Gafa Jr. recalled. The two-story structural steel building was 50 ft. off the ground, with 18 ft. of clearance to allow cars to cross the border. AMG had to deconstruct and dismantle it without disrupting the Port's around-the-clock operation.

Working around the clock themselves, AMG erected a tower crane to dismantle the steel structure and roof section of the building, using torches, chop saws, skid steers and scissor lifts to remove 45,000 sq. ft. of metal pandeck and roofing material, working on the steel structure in sequence as lanes of traffic were closed.

To prevent debris from falling 50 ft. onto oncoming traffic below, they installed an engineered, suspended "dancefloor" scaffolding system. Dumpsters were lifted onto the second floor by crane, where they were loaded with roofing and construction debris before being lowered back to the ground and then hauled off to landfills and recycling sites.

"It was precision demo," Gafa Jr. declared, detailing that crews were given three days per section, each consisting of 10 stacks of 35-ton, 136-ft.-long steel I-beams — and each area had to be broom-swept for sign-off. 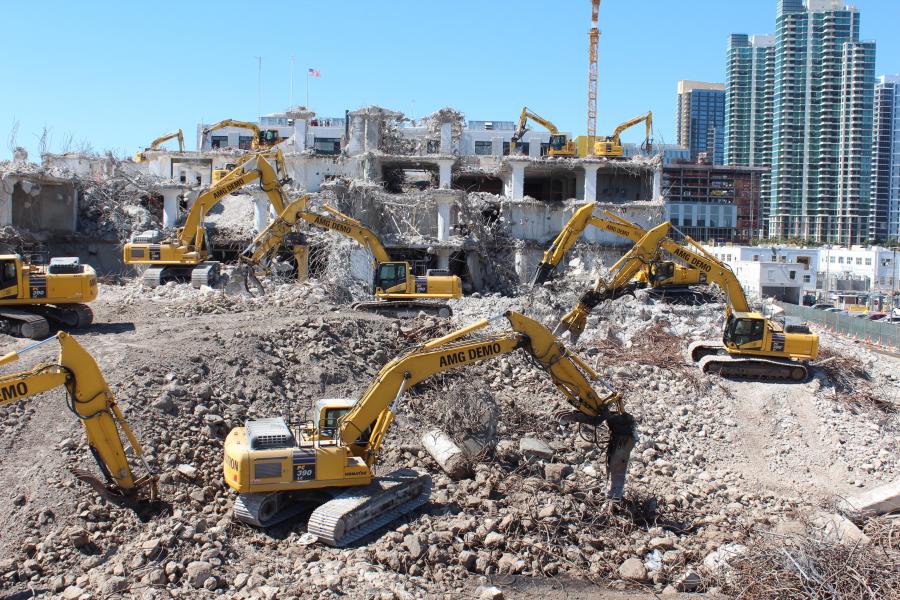 AMG was contracted to demo two buildings, the larger of which was built during WWII as a storage facility for the Navy during the Pacific Theater. The 126-ft.-high bunker-style building featured 10-in.-thick concrete floors, 3-ft.-thick interior walls, 18-in. perimeter walls and 38 to 40-in.-thick columns.

Because the site is just 60 ft. from an existing building and 10 ft. from Harbor Drive, AMG devised a floor-by-floor demo plan from the top-down. "It's fast and economical," Gafa Jr. said. Structural demolition nets and fencing were used for protection.

Equipment was lifted onto the rooftop by crane to demolish one level at a time. "We dropped one floor at a time and pushed debris down an elevator shaft, where debris was sorted, segregated and recycled, contributing to a recycling rate of 99.2 percent for the overall project." It kept 15 to 20 excavators working six days a week for four months.

Once demo was completed, AMG conducted mass excavation, moving 800,000 yds. in a 12-acre space comprising four city blocks to dig basements for parking garages. They dug the footings, did the subgrade and dealt with the contaminated soil.

AMG's fleet consists of approximately 100 pieces of equipment, all of which is Tier IV-compliant. Gafa Jr. lists excavators from 5,000 lbs. to 165,000 lbs., dozers, skid steers, sky traks and compaction rollers. "We don't own a scraper," he revealed. "We're excavator-heavy."

If they need a scraper, they rent one. They also lease some equipment, making purchase/lease decisions depending on available capital and based on their year-end summaries. Gafa Jr. said they have no brand loyalty, but the majority of their fleet is Komatsu. He said it's due to "good service, good price, good machines" provided by local Komatsu dealer Clairemont Equipment Rentals.

AMG Demolition now employs other members of the Gafa family. Mike Gafa Jr., senior estimator and project manager; Justin, Gafa operations manager, logistics and dispatch, rental equipment; and Jordan Gafa, shop manager and purchaser of supplies and materials have all joined their parents in running the company over the years.

AMG also employees approximately 150 employees, several of whom have worked for AMG for 20 years or more, creating a tight-knit group. "We like to keep people and grow from within," Mike Gafa Jr. said. "Our motto is ‘no days off.' We keep and feed everyone's family."

Maintaining the Present, Fostering the Future

Not every job AMG takes on is big or difficult. Gafa Jr. said they "never turn down work" and have even done apartment renovations. But they earn their reputation for tackling the tough jobs, and he says they'll continue to do so. "You can't just grow a company," Gafa Jr. stated. "You have to maintain the work load, the reputation and, most importantly, the employees." CEG