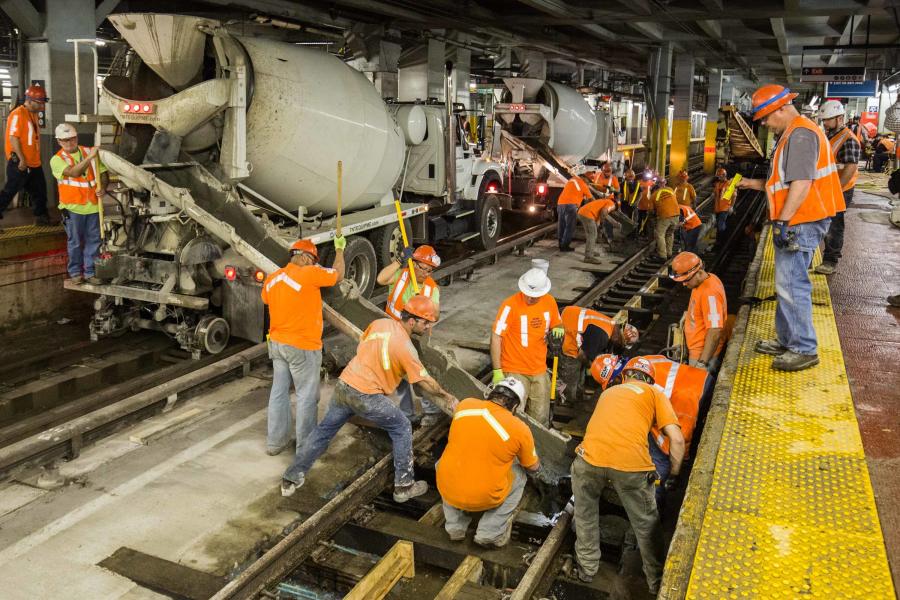 “After only a short time here at Amtrak it has become apparent to me that we need to accelerate major renewal work in New York Penn Station,” said Moorman, who became CEO in September 2016. “Using our limited resources, we have made this renewal project a priority to ensure the continuity of travel in the region. Without these improvements, Amtrak, NJ TRANSIT and the Long Island Rail Road could continue to see major disruptions, which also could have an impact on passenger safety.”

Moorman added, “We at Amtrak understand the steps that must be taken to ensure a safe and reliable railway and will be working throughout the summer and beyond to make the required improvements. We will be collaborating with our partners at NJT and the LIRR to plan this work in order to minimize disruptions and inconvenience for our customers who rely on us for service.

“The simple fact of the matter is that some of the track and infrastructure in service today at Penn Station was built in the 1970s at a time when we were handling half the trains and a third of the customers that we do today,” Moorman said. “While a substantial amount of reconstruction has already been done at New York Penn Station, the remaining renewal work has been scheduled to take place over the next several years in order to minimize impacts on scheduled services. We can't wait that long. This work needs to be done now.”

New York Penn Station Infrastructure Renewal Program — Amtrak will undertake a series of major track and switch renewal projects in Penn Station, beginning with the western portion of the station area. The first set of projects will occur in the area of tracks and switches known as “A Interlocking,” which serves as the critical sorting mechanism routing trains that enter Penn Station from the Hudson River tunnels and the Long Island Rail Road's West Side Yard to the various station tracks and platforms.

While Amtrak has maintained and repaired this aging infrastructure, some of which dates to the 1970s, full replacement is now required to improve the reliability of this infrastructure at this critical moment in the station's history. Rather than proceed with the full replacement of these components across an extended period stretching out over several years, as originally scheduled, Amtrak now plans to advance this work through a series of major projects beginning in May and continuing through the fall to quickly achieve the benefits of this renewal work for its partners and passengers.

In addition to the work in A Interlocking, further renewal work of various station tracks will be undertaken through approximately June 2018, with a majority of that work done on weekends.

These projects will require track closures, operational coordination and schedule changes, which will impact the service of all of the railroads operating in Penn Station. Amtrak will work with its partner railroads and other affected entities as it develops the schedule for this needed work and will make every effort to minimize disruptions to all customers.

Once this plan is finalized, Amtrak and its partner railroads will communicate the plan and its impact to the public and provide continuous updates as the work progresses.

New York Penn Station Passenger Concourse Coordination Review — Amtrak has commissioned former Metropolitan Transportation Authority CEO and Chairman Tom Prendergast to independently review the interaction, coordination and collaboration between the railroads' various passenger concourses within Penn Station. The review will focus on the current methods of managing daily operations within the station concourses, including during disruptions, events or incidents, as well as look for opportunities to strengthen coordination between all parties to improve the passenger experience, safety and security. While Amtrak is the owner of Penn Station, passenger concourse operations and control of various areas within the station are managed individually by Amtrak, LIRR and NJT.

Prendergast will review these relationships and develop recommendations on how the three railroads, working with other relevant parties, can improve the passenger experience, signage and wayfinding, video and communications, and incident response across the entire station.

Development of a Joint Station Concourse Operations Center — Amtrak is proposing that the three railroads serving Penn Station develop a joint station concourse operations center that brings together the managers of the various Penn Station concourses and technology to strengthen coordination, enhance the passenger experience and improve its responses to disruptions, incidents and other events that occur anywhere in the station.

While the tracks and other railroad operational elements of Penn Station are controlled at the Penn Station Control Center facility, which brings together all three railroads in various capacities, management of the station's passenger concourses lacks a similarly integrated facility to promote information-sharing, joint decision-making and the leveraging of technology. Amtrak will be seeking the support of LIRR and NJT to jointly plan, develop and staff a new facility at Penn Station and will use the results of the Penn Station Passenger Concourse Coordination Review to further inform these efforts.

Safety & Security — Amtrak will assemble a task force with partner railroads, first responders, law enforcement and other stakeholders to review protocols relating to disabled trains and ensure that adequate procedures are documented, trained and exercised. The task force will also examine the need for additional equipment and technology and review the functions of personnel during an incident to ensure that existing protocols are comprehensive and appropriate. The findings of the task force will be used to help inform the Penn Station Passenger Concourse Coordination Review efforts.

Additional information and updates about the New York Penn Station Improvement Initiatives will be posted at Amtrak.com and Amtrak.com/NYPrenewal.