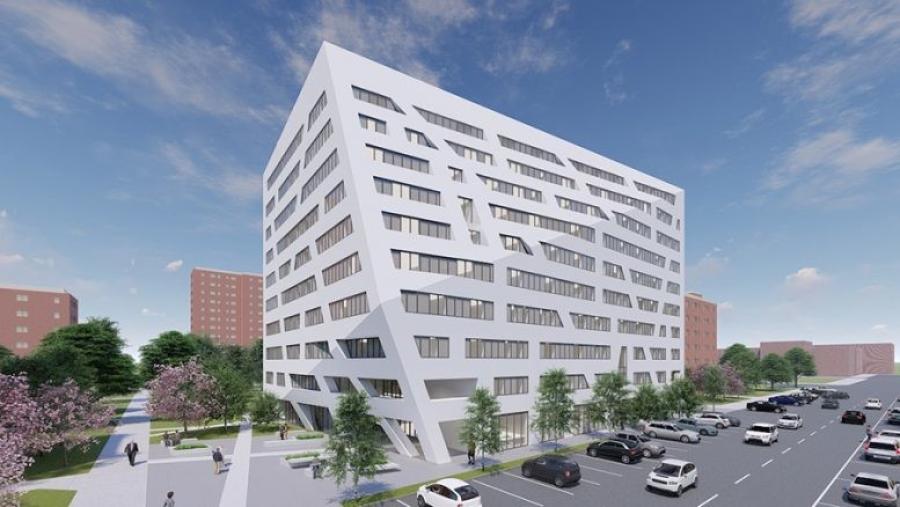 A new affordable housing project in Brooklyn's Bedford-Stuyvesant neighborhood has begun construction, one of several to break ground this summer in New York City's outer boroughs. Each are part of a public-private collaboration between the city and for-profit developers.

The 24,000-sq.-ft. lot sat vacant for many years, according to New York YIMBY, but when construction is completed in 2023, the building will comprise more than 138,000 sq. ft. of new residential space and 7,500 sq. ft. of community facility space.

The Atrium at Sumner is designed by Studio Liebskind, a renowned New York architecture group. As the structure rises, its design will unveil the massing slowly folding in as if receding from the surrounding campus, described New York YIMBY. The building's crisp white façade incorporates an asymmetrical arrangement of diagonal lines that are visually connected to leaning columns at the ground floor. According to Studio Libeskind, the goal was to create a dynamic interaction with the street and surrounding context.

Lettire Construction serves as the project's general contractor and the structural design was handled by LERA Consulting Structural Engineers. Both firms are based in Manhattan.

When construction is finished, the elegantly designed building will be made up of 130 studio apartments, 59 one-bedroom apartments, and one two-bedroom superintendent apartment. Fifty-seven units also will be set aside for homeless seniors, with the remainder of the apartments reserved for individuals and households earning at or below 50 percent of the area median income. In addition, NYCHA residents will be given preference for 33 of the apartments.

New York YIMBY noted that the building's architecture calls for a central atrium with corridors overlooking a year-round indoor garden on the ground floor. Space will be made available for flexible meeting rooms, an exercise room, a community garden and a social services suite. In addition, the community facilities will be activated as classroom spaces, conference rooms and a large multipurpose room.

Open space next to the new building will support a playground, walking paths, upgraded lighting, and seating.

"At a time when the price of living in New York City is on the rise, we're thrilled to play a part in bringing much-needed affordable housing as well as Bed-Stuy's first PACE center to Brooklyn seniors," said RiseBoro Community Partnership CEO Scott Short. "Over the past year, we have seen a critical need for affordable housing with integrated services to keep seniors safe and healthy in times of crisis. As the older adult population continues to grow, projects like Atrium are more important than ever."

Besides RiseBoro, members of the development team for the Atrium at Sumner include Urban Builders Collaborative, and Selfhelp Realty Group – The Melamid Institute for Affordable Housing. In addition to NYCHA, public partners include the NYC Department of Housing Preservation and Development and the NYC Housing Development Corporation.