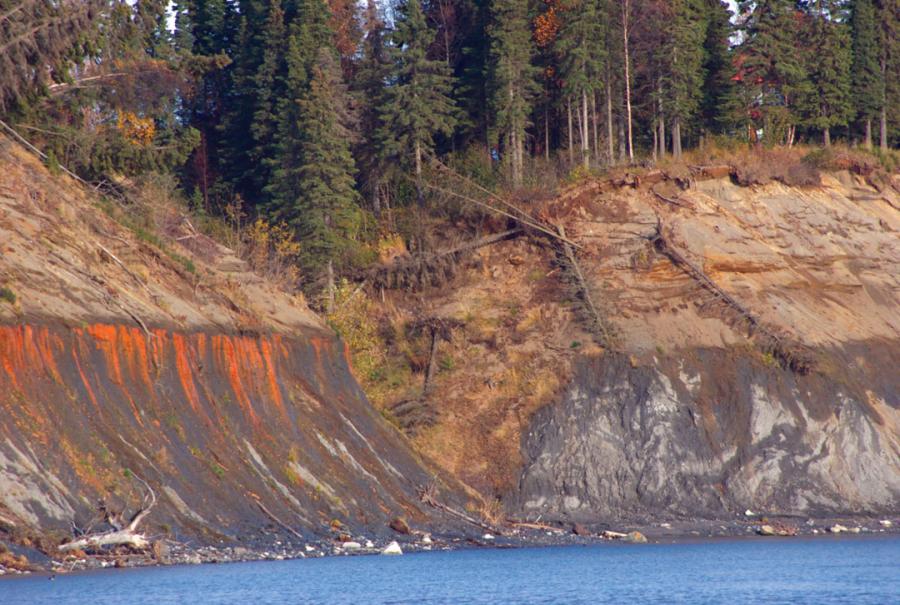 Photo by Jenny Neyman, Redoubt Reporter. A section of bluff in Kenai sloughs off

The Army Corps of Engineers is moving forward with plans to begin construction on an erosion mitigation project in southcentral Alaska that's been in the works for nearly 20 years.

The city of Kenai has been working with the Army Corps since 1999 on plans to halt erosion and prevent the loss of valuable residential and commercial property atop the bluff along the Kenai River, The Peninsula Clarion reported (http://bit.ly/2ldO6F1).

Kenai City Manager Paul Ostrander said a recent report includes several options the Army Corps could take for mitigating the erosion, with the preferred alternative involving the placement of protective rock at the bluff's base to stabilize the slope over time.

The project is estimated to cost $30 million.

In an October letter to Gov. Bill Walker, former Kenai city manager Rick Koch said the Army Corps is expected to release a final feasibility report this August, with construction tentatively scheduled for 2019.

Meanwhile, Kenai is working to purchase the properties along the bluff to make way for the construction.

Koch estimated last year the project would affect 34 properties, and 22 property owners near the bluff were issued letters of the city's intent to buy their land by the end of 2016.

The receding bluff edge has overtaken property lines that were drawn decades ago, leaving large portions of property as bluff, beach or riverbed. Many of these lands have low property values and some are owned by estates and trusts.

Pastor Vance Wonser of the Kenai Bible Church, which has sat atop the bluff since 1940, said erosion has resulted in the loss of some trees and a parking lot. The parking lot is the first and only one of the 22 target properties that Kenai has acquired so far. The church donated it to the city in December.

"It's not something we were getting use out of," Wonser said of the collapsed property. "We thought it was something the city could use. Obviously if the bluff erosion project ever goes through it's going to simplify things for everybody."

Paul Karaffa Jr. lives down the street from the church and has lost more than an acre of his property to the river. He said he has been contacted by Kenai about selling the land and that he wouldn't mind relocating to somewhere like Kasilof to get "out of the city."—AP