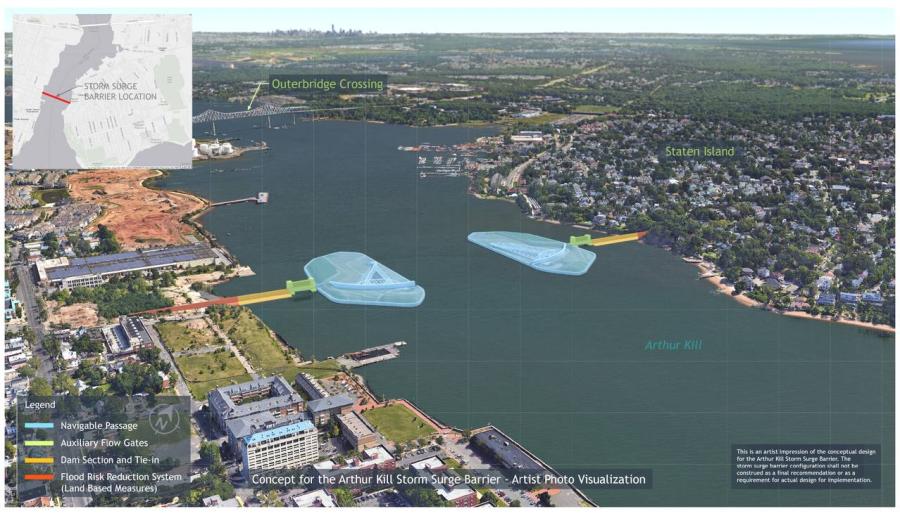 A conceptual rendering of the Arthur Kill Storm Surge Barrier, from the new HATS report. (Image courtesy of the U.S. Army Corps of Engineers.)

The U.S. Army Corps of Engineers (USACE) released a report Sept. 24 detailing the agency's proposed $52 billion plan to protect the New York City metropolitan area from storm surges and coastal flooding. The study marks a major step forward in a long-delayed plan first proposed in the aftermath of Hurricane Sandy exactly 10 years ago.

The USACE report notes significant details for a proposal that was chosen from a range of five options, as part of the NY & NJ Harbor & Tributaries Focus Area Feasibility Study (HATS).

The tentative plan, Alternative 3B, currently proposes a 14-year construction project that would build 12 storm surge gates across some of the largest waterways around the metropolitan New York City region, reported Gothamist, a New York Public Radio online news service.

Alternative 3B also would erect coastal barriers across more than 41 mi. of the city's shoreline, including extensive systems of seawalls and floodwalls in East Harlem, Lower Manhattan, southern Brooklyn and the entire Rockaway Peninsula.

USACE is asking for public feedback on its report through Jan. 6, 2023, in order to refine the proposal. The Corps expects to begin final designs for the plan in 2025 and start construction in 2030.

If approved, funded and built, the USACE proposal would create the largest and most comprehensive system of coastal protections in the region, while dramatically reshaping New York City's waterfront.

It also would be one of the largest infrastructure projects in the city's history. The scale of the proposal is comparable to the $14.5 billion system of levees, flood gates and seawalls that the federal agency built along 133 mi. of New Orleans' coastline in the aftermath of Hurricane Katrina.

However, just 11 months after completion of the Louisiana project, that system was deemed insufficient and in need of upgrades due to subsidence and rising sea levels.

After Delays, Plans Restarted in 2021

The Corps initially expected to announce its tentative plan for New York in late 2019 or early 2020. But funding for the study was abruptly halted in February 2020, after then-President Donald Trump described it as "a costly, foolish & environmentally unfriendly idea that, when needed, probably won't work anyway."

The largest alternative considered was a $119 billion plan that included a five-mi.-long storm surge barrier built across the mouth of Lower New York Bay, stretching from Sandy Hook, N.J., to Breezy Point, Queens.

The HATS study was quietly restarted in October 2021, under the Biden Administration, and Alternative 3B was selected this past July, after more than two years of delays.

Several factors went into its choice, including an evaluation of how it would protect the region from storm surges over a 50-year period. According to the HATS report, Alternative 3B could reduce the economic damages caused by coastal storms from 2044 to 2093 by an average of $6.2 billion a year.

Gothamist reported USACE expects storm surges in New York City to become more frequent and intense in the years ahead, due to climate change and sea level rise.

The proposal would potentially affect many ecosystems and wildlife species with surge barriers and seawalls constructed in marine habitats, wetlands, beaches and parks. The Corps report, though, noted that the impacts on wildlife, fish and endangered species would generally be low to moderate.

The largest environmental impacts are expected in the Jamaica Bay region, where the USACE rated the disruption on floodplains, wetlands, and the parklands managed by the National Park Service (NPS) as part of the Gateway National Recreation Area to be moderately high.

Riverkeeper, a non-profit working to protect the entire Hudson River watershed, has described the HATS study as "fatally flawed," and said storm surge barriers would pose "a threat to the very life of the Hudson [River and] Harbor."

Gothamist noted that these organizations have raised questions about the destruction of marine habitats and migration routes as well as the possibility that closing the gates during major storms would trap rainwater runoff, raw sewage and other pollutants behind barriers, causing flooding and pollution inland, in residential neighborhoods and parks.

Three of the waterways where storm surge gates are planned are highly polluted Superfund sites, which are undergoing lengthy cleanups by the U.S. Environmental Protection Agency (EPA).

The Waterfront Alliance, an organization that works with a coalition of more than 1,100 waterfront organizations in the region, released a statement about Alternative 3B to Gothamist.

"Waterfront Alliance is pleased to see the U.S. Army Corps of Engineers shift away from a storm surge barrier at the mouth of the New York-New Jersey harbor, to a more hybrid approach of green and grey infrastructure solutions," said Tyler Taba, the organization's senior manager for Climate Policy. "We continue to echo our support for a phased approach that incorporates more natural and nature-based features. We particularly encourage a closer look at buyouts, restored natural areas, elevation or relocation of infrastructure, and non-physical nonstructural measures."

What is in Alternative 3B?

The 12 storm surge gates proposed by the USACE would be constructed in tidal straits and rivers across the city. During major storms, they would be closed, protecting inland communities from the Atlantic Ocean, but the gates are not intended to guard against the gradual creep of sea level rise or inland flooding from heavy rainfalls, like the deadly floods caused by Hurricane Ida last year.

The largest gates currently proposed include a dual surge gate system on the Arthur Kill and the Kill van Kull, two of the busiest shipping channels in the region, and a gate across the entrance to Jamaica Bay, a vast tidal estuary that is home to nature preserves and endangered salt marshes.

Gothamist reported that storm surge gates also would be built in New York at the mouths of Flushing Creek, Newtown Creek, Gowanus Canal, Sheepshead Bay, Gerritsen Creek, Shellbank Basin, Hawtree Creek, and at the head of Jamaica Bay, and, in New Jersey on the Hackensack River. A tidal gate also is proposed for the middle section of Coney Island Creek.

On shore, these gates would be connected to more than 31 mi. of coastal defenses built across surrounding neighborhoods, including a system of levees, floodwalls and seawalls that would stretch over 22 mi. from Bath Beach, Brooklyn, to Far Rockaway, Queens. The plan also calls for constructing walls, elevated promenades, and flood barriers along 5.7 mi. of shoreline in Lower Manhattan, 4.7 mi. in East Harlem, and 8 mi. in Jersey City, N.J.

While Alternative 3B was not the largest proposal considered by the USACE, it is, by far, the most comprehensive system of coastal barriers proposed for the city. The Corps is also building coastal defenses along the waterfront of the Rockaway Peninsula and has begun its preliminary work on a 5.3-mi.-long shoreline barrier in Staten Island.

Other large efforts currently under way in New York City include the Governor's Office of Storm Recovery's Living Breakwaters in Staten Island and the East Side Coastal Resiliency (ESCR) Project in Manhattan, Gothamist noted. Each of these projects protects a relatively small part of the city's waterfront, compared to the USACE's latest proposal.