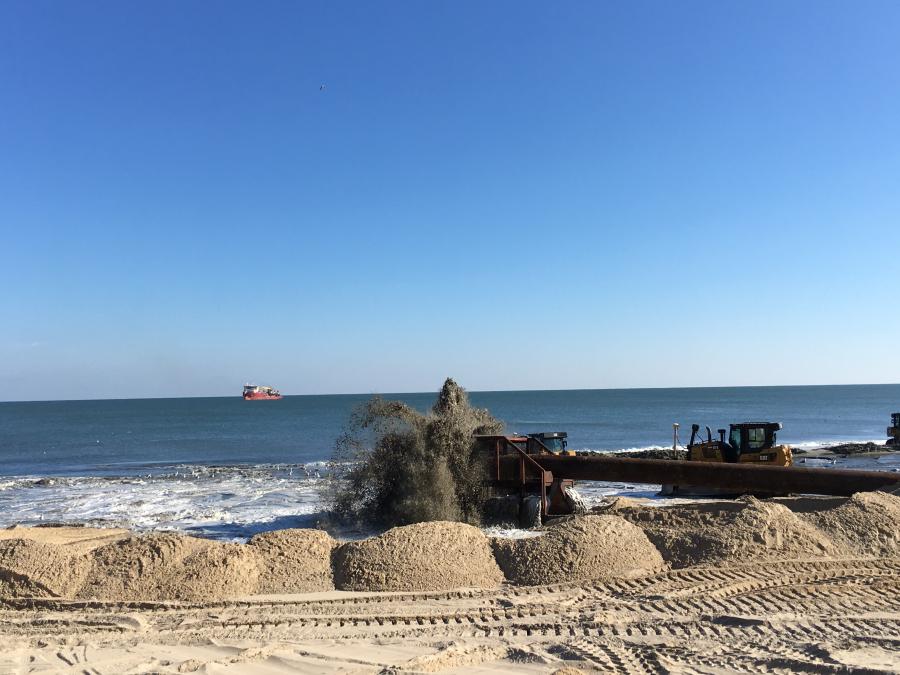 A sand and water slurry mixture is pumped onto the beach at Ocean City, Md., from an offshore dredge visible in the distance during beach renourishment work Nov. 20, 2017. (Chris Gardner of the U.S. Army Corps of Engineers, Baltimore District photo)

The U.S Army Corps of Engineers is currently in charge of a beach renourishment project in Ocean City, Md.

The work is a periodic renourishment of the existing Atlantic Coast of Maryland Shoreline Protection Project, a coastal storm management project initially completed in the early 1990s. The project is a cost-shared effort between the U.S. Army Corps of Engineers, Baltimore District and the state of Maryland, Worcester County and the town of Ocean City.

“The overall project itself consists of the wide, elevated beach berm [essentially the beach as people know it]; a protective sea wall built into the boardwalk; and the vegetated dune system that continues north from the boardwalk to the state line,” explained Chris Gardner of the Corporate Communication Office of the U.S. Army Corps of Engineers Baltimore District. “These elements all work in concert to reduce impacts from inundation, storm surge and wave action, reducing risks to the community from coastal storms big and small.”

The $12.7 million contract was awarded to Great Lakes Dredge and Dock (GLDD) of Oak Brook, Ill. The project manager for the Corps of Engineers is Justin Callahan. Work began in October, with actual sand pumping beginning late in the month. Work is anticipated to be complete in December.

The Ocean City project is a part of the larger project. Gardner explained that the beach berm is the wide, flat beach that eventually gradually slopes into the ocean.

“Crews are dredging sand from an offshore borrow area and pumping it onto the beach in the form of a sand and water slurry from offshore via a submerged pipeline,” he said. “The submerged pipeline emerges on the beach and connects to a network of pipes that direct the sand and water slurry to where it is needed, and dozers move the sand around as the water drains back into the ocean. What is left is additional sand to be moved and contoured to the construction template of the beach berm. Crews then survey to ensure the proper elevation of the beach as they continue moving along and renourishing the beach.”

Gardner explained that some of the challenges encountered on job like this might be delays associated with weather, or particularly choppy seas that might require the dredge to pause operations temporarily. In addition, dredges are often prone to mechanical issues that can sometimes cause delays.

According to Gardner, renourishment is generally done every four years or so, but this renourishment was slightly accelerated (being done three years after the last one) based on impacts from Winter Storm Jonas in January 2016.

“This periodic renourishment repairs day-to-day wear and tear and erosion, as well as offsets sand losses stemming from larger storms,” he said. “In this case, the project protected the community during the January 2016 storm often referred to as Winter Storm Jonas, but in doing so, the project experienced significant erosion. This means the project performed as designed. The project was still in a condition to be able to reduce risk from further storms, but it needs its periodic renourishment in order to ensure that it can continue functioning going forward.”

Gardner explained that it is important to note that renourishments like this one are considered during the planning process, and are factored into the estimated project costs over the life of a project. Therefore, they are an expected and planned part of the operations and maintenance cost.

“The overall Atlantic Coast of Maryland Shoreline Protection Projection is an example of an extremely successful coastal storm risk management project, having prevented an estimated $927 million is damages to Ocean City since being completed in the early 1990s,” Gardner said.

Gardner reported that an estimated total of 883,000 cu. yds. of sand will be placed during this contract.

The dredging is being done by GLDD's dredge, the Liberty Island. The sand and water slurry is being pumped ashore via a submerged pipeline. On the beach, the submerged pipeline connects with large steel pipes that direct the slurry to where it needs to be placed. Dozers and other earthmovers are used to push the sand around and into place to meet the construction template for the beach berm.

Gardner explained that MEC baskets — mesh cages on the end of a pipe — are a standard feature in beach renourishment jobs.

One of the more unusual pieces of equipment being used is the Coastal Research Amphibious Buggy (known as the CRAB). It looks like a tripod, and is equipped with a centimeter-level Differential Global Positioning System (DGPS). The CRAB is used for precisely surveying from the beach out to the 9m depth contour.

“Another interesting aspect of these sort of beach projects like our project at Ocean City is that a lot of times people may not realize that the beach being renourished is an engineered coastal storm risk management project designed and elevated to reduce risks to the community,” Gardner said. “The beach at Ocean City is a well-known tourist destination, and the beach itself is famous for being a great recreational asset ... but many people, especially those who visit from out of town, may have no idea that the beach, as it exists today, was designed and constructed to reduce coastal storm risks. The same is true for periodic renourishments like this ongoing work. People may think the work is being done to maintain or improve recreation, but the work is being done for the purpose of ensuring the coastal storm risk management project continues to function as designed.”