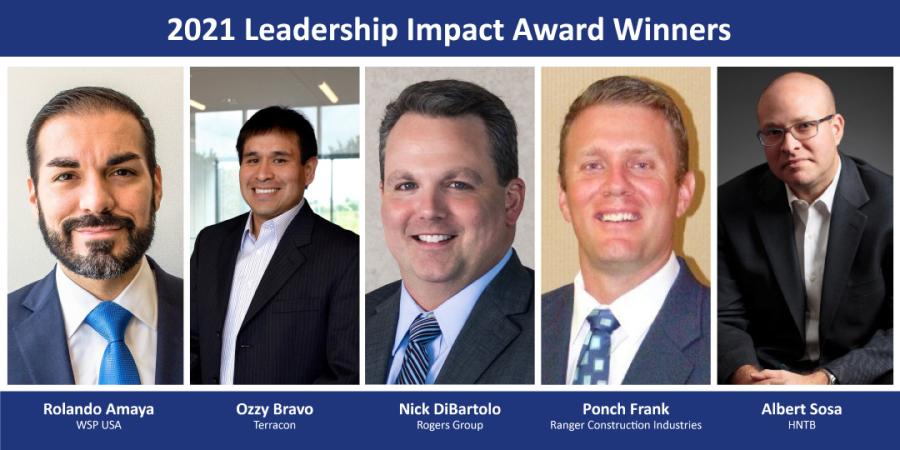 The ILDP annually provides attendees with a solid understanding of industry economics, how transportation work in the United States is funded and financed, how actions by the federal government impact the industry, and how they — and their company or agency — can become politically engaged.

Nearly 800 professionals from all eight ARTBA membership divisions representing 200 firms and public agencies have completed the program since 1996.

The winners of the 2021 Leadership Impact Awards, announced during the association's national convention in Pinehurst, N.C., were evaluated on these key criteria:

The winners, followed by the year they completed the ILDP, are:

Bravo is on the national Women Transportation Seminar Diversity, Equity & Inclusion Committee, which establishes measures of diversity, inclusion and equity. He focuses on working closely with Terracon's emerging transportation market leaders, mentoring them as they transition from technical into business strategy development. Bravo continues to serve in leadership roles at ARTBA, as a past ILDC Chair and currently a director on the Planning & Design Division's board.

Sosa regularly holds meetings with elected and appointed officials at the local, state and national level to advocate for infrastructure funding and transportation related regulatory issues. He founded the firm's south Florida construction services practice and grew it to over $10 million in annual revenue in 4 years.

DiBartolo was elected to the ARTBA board of directors two years after completing the ILDP. He is presently co-chair of the ARTBA Workforce Development Council as well as southern vice-chair of its ILDP. Since 2020, he has been ARTBA's liaison to the Federal Highway Administration's implementation team for its EDC-6 (Every Day Counts Round 6) Strategic Workforce Development initiative.

With nearly 25 years in the industry, Frank is active in the community as an officer for the Florida Asphalt Scholarship Program, as a member of Virginia Tech's Committee of 100, and by mentoring new project managers and engineers within Ranger. He also is past ILDC Chair and served as 2015 co-chair of the ILDP's strategic planning committee.