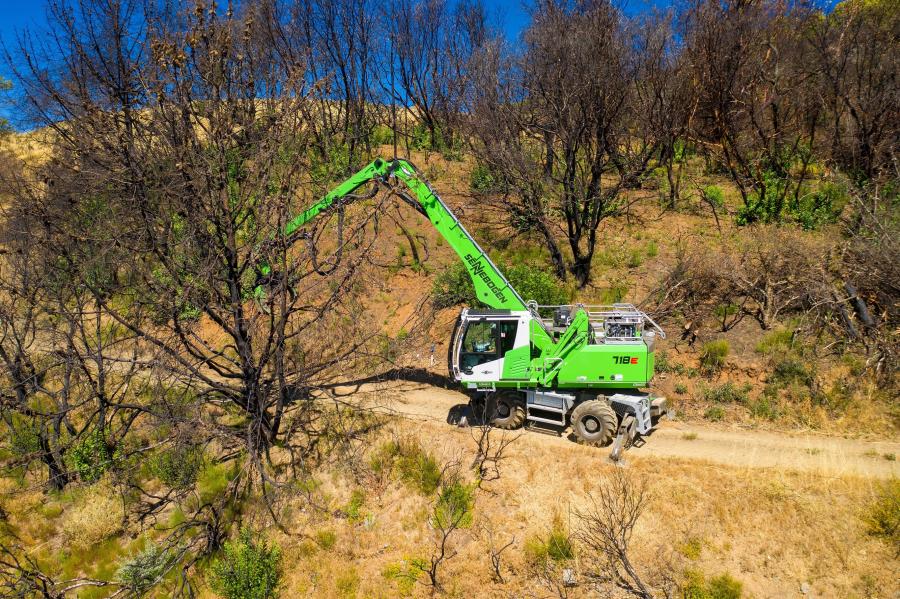 Removing burned out trees from wooded areas is an ideal job for Atlas’ 718.

Rich Kingsborough is feeling pretty good about his growing fleet of green machines.

Since receiving his first Sennebogen tree care handler in August of last year, he has added six more machines, and more are on the way. For Kingsborough, this specialized fleet means more than added capacity and new projects for his company, Atlas Tree Surgery Inc.

"The most important thing," he said, "is that Sennebogen has proven to perfectly align with our company mission: To elevate the standard of our industry through safety, training and innovation."

Safety and Productivity Through Innovation

Kingsborough emphasized that he's looking ahead to the future of his industry as a whole, not just his own business. He knows trees better than most: many industry pros recognize him from past years as a nationally ranked competitive tree climber.

He has been operating Atlas for 39 years and has even developed his own academy to train climbers, ground crew and equipment operators.

"Two years ago, we were at the TCI Expo in Charlotte, N.C., looking for innovative ways to increase efficiency.

"I've always been a big fan of utilizing equipment to assist in our work. We looked at grapple saw trucks but their trouble is, after you cut, the tree part just drops into the branches below, which causes breakage and creates a safety hazard. I knew that wasn't going to work for us. We needed something that could cut and hold the tree part and bring it safely to the ground."

Coincidentally, Sennebogen's head office wasn't far from the site of the show, and the manufacturer was inviting attendees to demonstrations of its new tree care line.

Game-Changer for the Industry

"I got excited as soon as I saw the Sennebogen," Kingsborough said. "I knew they were going to be game-changers for our industry."

He reached out to some of the east coast companies who were already working with the tree care handlers and they confirmed what he had seen at the demo. And he knew what he wanted to do with this equipment.

"We stuck our neck out with our first Sennebogen, even before we got the work for it. We were looking at a really large project we wanted to take on — big enough to keep all of these machines busy. But we knew that, even if the other job didn't come through, there would be enough other work for at least one machine."

In fact, Atlas didn't win that first job, but with its new Sennebogen 718 M, Kingsborough's team could go after several other large projects. And those bids have been successful.

"We have been growing over the past couple years. One of the reasons for that was the catastrophic fires that burned through here in California. Also, by expanding in different areas, we opened up different Atlas divisions for larger right-of-way and commercial jobs. We're up from 50 employees to 200, still looking for more to recruit and train. And our Sennebogen are now in the field."

Atlas currently is operating five wheeled Sennebogen 718 M machines, along with one of the larger 738 M models, and it recently received its first crawler-mounted 718 R-HD unit.

The business end is operated from inside the 718's high-rise, tilting Maxcab operator station, which can elevate the operator for an unobstructed view into the work zone. Unlike the grapple saw trucks Kingsborough had been considering, the 718 can swing through 360-degrees to grab and cut, then carefully set aside the cut limbs, to size and stack logs or brush, or even feed the material directly into a chipper or grinder, according to the manufacturer.

The 738 is the same idea but bigger. Twice the size of the 718, the 738 extends its reach to 75 ft. (23 m) while, according to operators, it handles with the same fluidity, the same precision, the same fast cycle times as its smaller version.

The difference on the job site is remarkable. Kingsborough related his first project using the 738. "We had a row of about 100 eucalyptus trees; about 120 to 150 ft. high. Branches were stretching over two lanes of a major roadway, so we couldn‘t just cut and drop. Typically, we would have had two climbers up in the tree, and a 100-ton or larger crane to bring the tree down. With the 738, we completed the job in less time, using fewer people, without a crane, and we didn't have to put one climber in the tree. Anytime you can take a climber out of the tree you have made the job safer.

"Up to now, we would have planned for about ten crew on the job site. The most we ever had there was up to five. We scheduled two months for the job, and we got it done in about 6 weeks."

Much of Atlas' fire response work is completed from the roadside, where the 718 can dismantle and stack a stand of trees, then quickly drive on to the next position. The new tracked unit is intended for off-road projects, where they excel, but Kingsborough reported that the wheeled 718s perform much better in off-road conditions than he expected.

The biggest impact of the Sennebogens, however, has been on Atlas' employees.

"Tree-climbing is one of the hardest jobs in the world," said Kingsborough. "Guys get fatigued. The more people you have on the site, and the longer they work, the chance of injury just increases. I have guys who have been with me for over 30 years and are still out there doing it. I'm excited to know these machines can prolong the career of the climber.

"It's not only time-saving, it's effort-saving. The Sennebogens will let them continue in the industry that they love for longer. Not every climber is cut out to move into sales or management; they like doing the work. This type of equipment makes a really dangerous job a lot easier and safer.

"Our operators love it. You should see the smiles after they first had the opportunity to train on a 718 and run it. After their initial training, in 2 weeks you could see that they were getting the hang of it. After a month, our guys have really started to shine on it."

Kingsborough noted that all the operators he has trained, to date, have had prior experience as a climber, or operating logging equipment.

"There's a larger learning curve required to understand cuts, weights, what a tree's going to do after you cut it. It's very beneficial to have a background in tree work before you jump onto one of these machines."

Versatility On Or Off the Road

Now with a couple of seasons under their belt, the Atlas team is finding more ways to put the tree care machines to work. Agile enough to piece out branches around utility lines, they also found they can apply the strength of the 718 to simply push trees over.

"If you have a skilled faller, he can make his cut, make his backcut, leave 15 percent hinge wood… and then just walk away. The Sennebogen easily pushes it over. The faller doesn't have to be there; he's out of harm's way. You don't need a climber to piece it out, or put a rope in it, either. It's very efficient," Kingsborough said.

"It saves a lot of clean-up hours. You stage it right where you need it, as you're cutting. Once the tree is down, everything is in neat piles, ready to chip or load."

"I'm really excited about that unit," Kingsborough said. "It has almost the same reach and capacity as the 738; but you don't have to have a 9-axle trailer to move it. It will drive right on and off a flatdeck, and it has a smaller footprint. That will open up access to a lot of areas with big trees that the 738 can't get to." 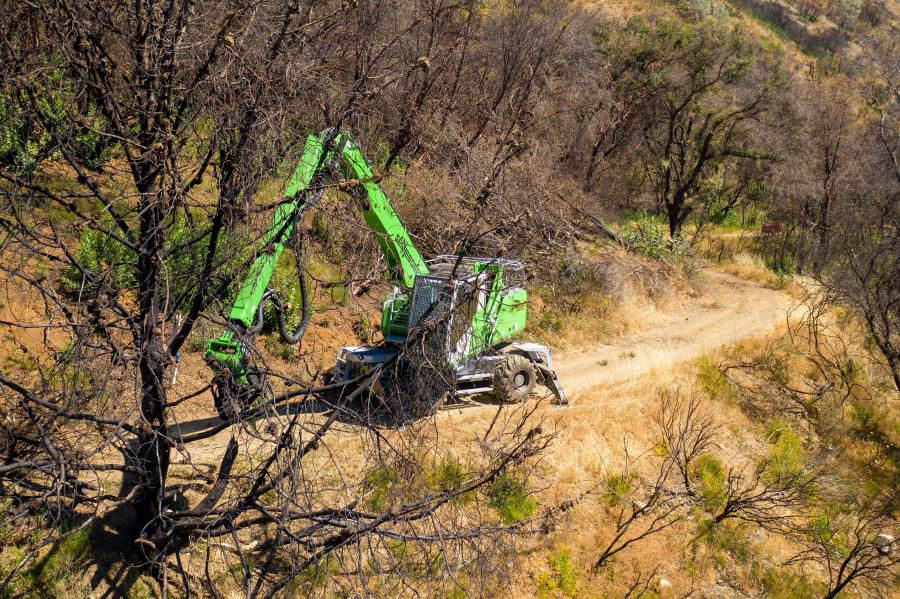