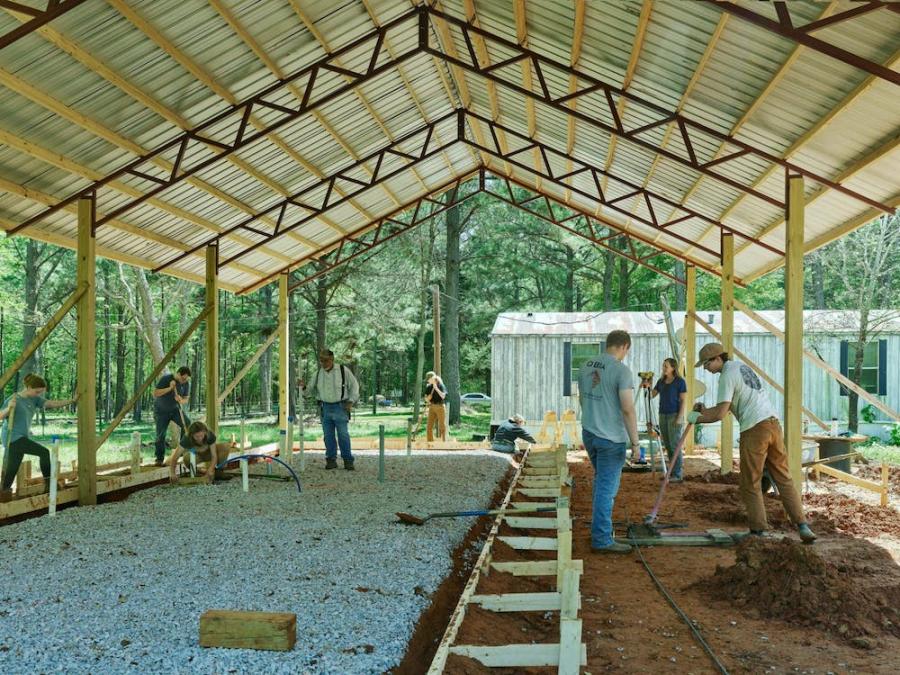 Rosie's Home, which is currently under construction by third-year students, is estimated to be completed by April 2023. (Timothy Hursley photo)

Across Alabama, the landscape is littered with abandoned shops, rusted-out factories and dilapidated homes without hope of revival in small towns that have seen better days. However, a program at Auburn University aims to reverse the state's rural decline.

Rural Studio, a College of Architecture, Design and Construction program at the university, is an award-winning effort that uses architectural design to build resiliency in rural communities. It sits at the crossroads of theoretical academia and practical application.

According to the Alabama Department of Public Health, 55 of the state's 67 counties are rural, and they hold almost 44 percent of the entire population. Compared to the national average of 19 percent, Alabama is one of America's most rural states.

Living in a rural community presents a breadth of challenges to residents, such as a lack of access to quality food, healthcare, broadband infrastructure and dependable housing.

Based in Newbern, a town of 221 residents, Rural Studio has become a member of the rural communities it was created over 30 years ago to support.

"I think I've learned more at Rural Studio than I have at any other studio within the architecture program," Laurel Holloway, a recent graduate of the program, told The Auburn Plainsman, a student-run news source at the university.

Holloway is a member of a four-person team that began the "Patriece's Home" project in September, the fall semester of their last year at Auburn. The goal is to provide community members with a maintainable two-story house for them and their family.

The team designed the building's concept, coordinated with the client and contractors, laid the foundation, and will drive the final nail.

Rural Studio builds all its projects following this model, according to the Plainsman.

"Normally, architecture students just draw stuff," explained Andrew Freear, professor of architecture and director of Rural Studio. "They're getting an incredible experience, learning how to put something together and manage a project, manage a budget and manage conversations with consultants."

Students in the program also take support classes, like a history of wooden buildings, or they learn the hands-on skills necessary to complete a job, such as welding and carpentry.

"The students get remarkable hands-on opportunities out here that's quite amazing," Freear added. "I would have loved to have been out here as a student."

The "Patriece's Home" team of students will stay with the project until it is completed despite graduating next spring before their client can move in. Freear, though, told the Plainsman that it is common for students in the program to continue their work past graduation — so much so that they are lovingly called "leftovers."

Critically, Rural Studio does not observe its surroundings from an isolated place; rather, students and instructors have lived and worked in Newbern since Samuel Mockbee and D.K. Ruth co-founded the studio in 1993.

"I remember when I came here, there was a big amount of mistrust in academics," Freear said. "[Academics] would come to this part of the world, they would do their research, get tenure, and then they [would] disappear again, and we [have not done that]."

Students and faculty also live in Newbern as a function of their studies and work.

"It's really expected that you'll be part of a community," said Judith Seaman, a third-year instructor. "We get jobs in the area. We rent apartments in town. [This is] not a helicopter program. We're rooted here. I worked at the library locally that we actually built about a decade ago."

By embedding in the community, Rural Studio members gain perspective on rural living outside their degree program. For example, one of the persistent challenges of rural life is limited access to fresh foods due to limited access to supermarkets or grocery stores.

Despite its proximity to the agricultural industry, Newbern is considered a food desert. However, reflecting the can-do attitude of their community, members of Rural Studio began growing vegetables in their front yard 13 years ago.

"My dean once said, ‘Why are we doing this? We're architects, not farmers,' and we basically [realized] this is out of necessity," according to Freear. "We can drive 10 miles to get prepackaged processed foods, or we can start to grow it. So why not make it an educational thing?"

Each morning at 6:30 a.m., Rural Studio students start their day by helping to grow the 7,000 lbs. of food their community farm produces annually. Students and instructors not only eat what they grow but share the bounty with surrounding communities.

While the farm does not solve the food desert crisis, it does help students understand the space around them, Freear noted, while also helping, in a small way, to protect a vital part of Southern tradition.

Despite the challenges rural communities face, their residents continue to come together to solve the problems they face, and Rural Studio is no exception, the Plainsman noted.

"People involved in agriculture and policy and community health, and all kinds of fields, can be involved in a similar way in their communities and work to affect it on a small scale that becomes kind of a larger system," Seaman said.