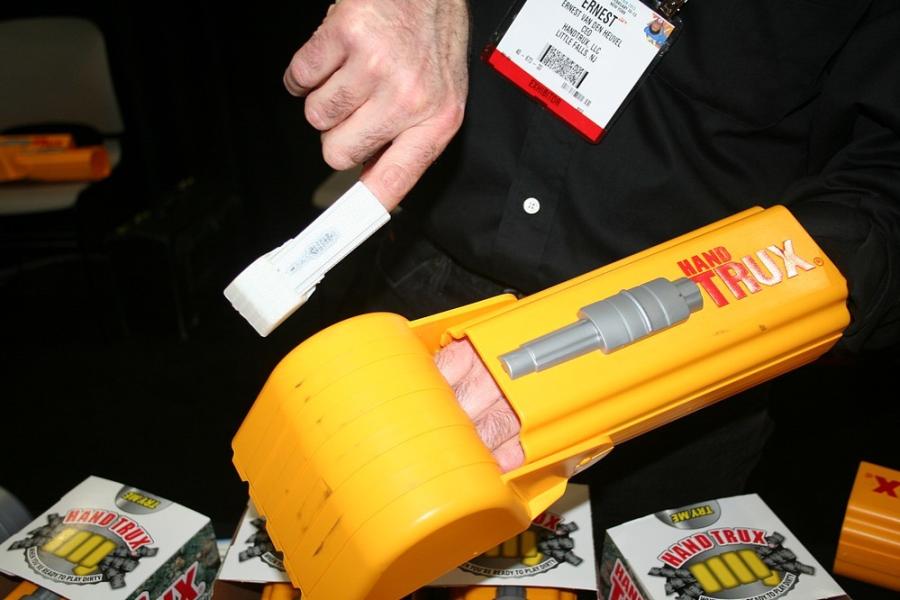 What if, Ernest Van Den Heuvel thought, kids could become a backhoe, or a dump truck, or a bulldozer, with a plastic toy they would wear on their hands like a glove?

The idea, he said, came to him in a flash. What if, he thought, kids could become a backhoe, or a dump truck, or a bulldozer, with a plastic toy they would wear on their hands like a glove?

Inspiration arrived quickly, but the journey to get his toy, which he named HandTrux, into stores has been long and slow. A decade after his original brainstorm, Van Den Heuvel, a Rockland County, N.Y., resident who has partnered with a digital marketing and branding company in Little Falls, N.J., and a veteran toy marketer and promoter from Fair Lawn, is seeing new opportunities in a retail landscape that has been dramatically altered by the collapse of Toys R Us.

As retail chains as varied as drugstores, party supply stores, supermarkets and home improvement centers are considering adding toy aisles to pick up some of the sales that used to go to Toys R Us, Van Den Heuvel and his partners have found new potential buyers for their toy.

"It has opened up the door to multiple distribution channels because of no Toys R Us," said David Fingeroth, who headed a Fair Lawn-based toy promotion company, Hands On Promotions, and who this year joined Van Den Heuvel's toy company as vice president of new business development, marketing and licensing.

Fingeroth said he has been lining up retailers interested in variations of Van Den Heuvel's original idea for a digging toy, including versions designed for garden centers, snow plow versions for the winter months, and even a version for pet stores that would use the backhoe mechanism as a pooper scooper.

"Through its durability and through the design that Ernie came up with, it can be used in so many different ways," Fingeroth said.

The history of HandTrux demonstrates how hard it is for independent inventors to turn a bright idea into business success.

Van Den Heuvel, 59, has more than 30 years of experience in excavating, but along the way he's built a colorful résumé for himself that includes rock guitarist and stage technician and production coordinator for rock concerts. He also has several patented inventions in addition to the HandTrux and has several entertainment projects he would like to see developed into comic books or cartoons.

HandTrux won fans from the very beginning in 2008 and got the kind of notice early on that others inventors dream of. Back when FAO Schwarz still had its iconic flagship store on Fifth Avenue, HandTrux won a contest for new toy inventors. The prize was the opportunity to demonstrate the toy at the Fifth Avenue store and sell it. "The toy was a hit. Every weekend we would sell out our allotment – four cases," Van Den Heuvel said.

Soon after it was cited on a CBS morning show as one of the hot toys of summer.

Buyers for Toys R Us met with Van Den Heuvel, and his production partner, John Romano, a principal in CW Media Corp. in Little Falls, but said they didn't want to carry a single item toy line and recommended that HandTrux develop additional products.

In recent years the toys have primarily been sold on Amazon.

The company has recently launched a smaller version of the toy that is better suited the hands of younger children, and also a "micro" line of toys that fit on a finger, and can be used to dig in a tiny, desk top sandbox.

Van Den Heuvel, Romano and the creative team at CW Media also have created an animated property tied to the toys, which is still in development. It is called the Dozer Boys, and features three boys who want to be like their dads, who operate construction machines. The dads make a backhoe, dump truck, and bulldozer for the boys and the boys start their own business.

Van Den Heuvel reached out to Fingeroth for marketing advice this year, and Fingeroth said he saw huge potential for the toy and the Dozer Boys property.

Romano said the company had responded to suggestions from retail buyers that it develop smaller, less expensive versions of the toys, and had invested in new molds and packaging when they decided to look for someone with experience in the toy industry. "We said we need someone who can take us to the next level," he said.

Fingeroth said he believes HandTrux in the past had difficulty breaking into national retailers because it didn't have the marketing or manufacturing infrastructure it needed. The toys are made in New York and the company has arranged for a larger factory to produce the toys, increasing its capacity to fill large orders. Now, he said, he expects the toy, and the new variations, to be in major retailers within months.

Chris Byrne, a toy historian and content director of the toy review website TTPM, spotted HandTrux soon after it was originally released and is a fan.

"It's the kind of toy that I would have loved when I was a kid," he said, "because you can make a lot of mess really fast."

Whether HandTrux becomes a hit will depend on how well the company markets it, Byrne said. "I think it's got a strong potential to do well," he said. "One of the things that will happen with Toys R Us going away is that people will see toys in other kinds of places. It's a natural for garden centers, it's a natural for outdoors," or home improvement centers where parents shop for supplies to build sandboxes, he said.

Van Den Heuvel said one reason he's kept promoting HandTrux all these years is he believes he's building something bigger than toy sales.

"When you're looking at a cellphone or video game, not only is it stealing your imagination, it's isolating you," he said. "When you grab this toy, number one you go outside, you dig, it unleashes your imagination to put pipe in the ground, to dig, dig, dig. You dig the foundation for your house, cut the roads for your town, you build hospitals, schools, all of it with this equipment."