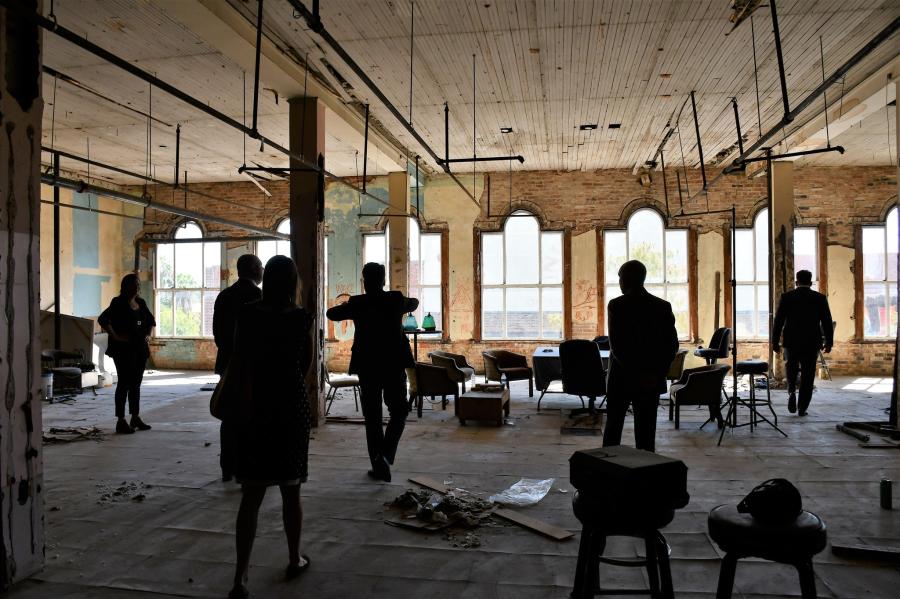 In Lake Charles, La.'s, hurricane-damaged downtown, two years after Laura and Delta roared through town, some storefronts are still boarded up, while others keep limited hours. The fate of the city's largest office tower, an empty patchwork of boarded-up windows, is still unclear. The sidewalks, for the most part, sit empty.

Despite the reminders of the storms' wrath, though, progress is happening.

On rooftops and cranes, construction workers are busy laying down new roofing on the Baptist and Catholic churches and restoring the clock tower of the historic city hall.

Downtown Lake Charles was on an upswing before the storms hit and put many of its businesses out of commission. Now, many residents feel that momentum is finally building again for it to come back.

"The storm threw a monkey wrench in our project, but the machine is still moving forward," Dave Evans, owner of Luna Bar & Grill, said of the collaborative effort among downtown business owners to create a coherent bar, restaurant and shopping district.

The New Orleans Advocate reported Nov. 28 that beyond its importance to locals, a vibrant downtown in Louisiana's fifth-largest city also would provide other entertainment alternatives for visitors from nearby Texas to venture further away from Lake Charles' two casinos.

Across the street from Evans' business, a recently announced project will restore an old Sears location, which previously housed a bar and music venue. The large property, taking up nearly an entire city block, had remained mostly vacant since before the storms.

New Orleans-based Green Coast Enterprises plans to turn the building into a mixed commercial space, serving food on the street level and housing two stories of office space above.

Looking to diversify its geographic reach, in 2020 the company conducted a census data analysis to identify emerging markets. Lake Charles and its pre-storm growth quickly became a city of interest, and despite the obvious blow that year's hurricane season delivered to the city's population size and economy, Green Coast CEO Jackie Dadakis continues to see its potential.

"We're very confident that that is temporary," she told the Advocate. "You always see that sort of displacement that comes after such a traumatic event, but the reality is there's still jobs, there's still people there. There's still families and communities."

Being based in a city that has seen its share of disastrous weather events, Dadakis noted that her team is well-versed in rebuilding.

"We know what that's like, and we know what it takes to bring back a community," she explained.

However, the project also shows one of the challenges of redevelopment after a disaster: the displacement of existing businesses and community fixtures.

The owners of Cedar Chest Antiques, an old-fashioned antiques mall in business on the ground floor of the former Sears building's north side, have been told they will have to leave by the end of the year.

"It was unexpected," said Ricky Wilson, who has been running the store with his wife for the past 12 years. "We were hoping we'd still have a couple of years. We enjoy it so much."

On the other hand, Wilson is taking the early call to retire in stride.

Lake Charles, he noted, needs to make investments like this to rebuild the city.

"This is our home and we're glad to see it developing," he said.

The Green Coast project is scheduled to begin construction in May, with an expected reopening in 2024.

Need for New Housing to Be Met

Just one block over, a new housing development will break ground in January, according to the Advocate. HRI Communities, a New Orleans-based real estate developer focused on historic neighborhoods in urban areas, is planning to build a 110-unit residential property on an undeveloped plot of land between the city's downtown and a historic residential district to the east.

"Lake Charles clearly needs new housing investment right now and has a demand for apartments — that's a big driver," explained Josh Collen, CEO of HRI Communities. "The downtown has a ton of potential."

The project, which will consist of a 70-unit apartment building and a row of townhouses totaling another 40 residences, is funded with the help of the federal Community Development Block Grant Disaster Recovery program. At the beginning of November, more than two years after the storms, HRI finally received notice that the funds had been committed.

To qualify for the loan program, the project had to meet elevated hurricane resiliency and energy efficiency standards, such as impact-resistant doors and windows, and generators in case of a storm-induced power outage.

"After hurricanes Laura and Delta, we decided we really wanted to be part of the recovery effort," Collen told the Advocate, adding that although long-term federal aid took a while to arrive, "we knew these funds would someday be approved by Congress."

Despite that, long-term federal recovery aid is yet to make its way into the hands of local government, where it could be used for revitalization programs, including in downtown Lake Charles.

Federal Emergency Management Agency (FEMA) reimbursements for repairs on buildings owned by the parish and city, which have a significant footprint downtown, also have been slow to reach Lake Charles.

The Advocate noted that with a part of the funds necessary to finance HRI's project on the books, the first phase is set to break ground in January. In total, the residential development will include 21 market-rate units, 16 units for low-income renters and 73 units of workforce housing, which requires renters to make between 50 percent and 80 percent of the Lake Charles area median income.

The two projects are a point of pride for Lake Charles Mayor Nic Hunter, who has worked since the hurricanes moved on to bring federal aid to the city and reinvigorate private investment.

"There was a moment after Hurricane Laura when we really didn't know if a lot of these businesses were coming back or if people were even going to be interested in investing in downtown," Hunter said. "So, it's really exciting."

And there are several other projects at varying degrees of completion currently under way, the Advocate learned.

A new bank building will be constructed on an empty lot just north of city hall. At the lakefront, the civic center events space, still under renovation, is expected to be fully operational again in mid-2023, according to Hunter. Next to it, a hotel and conference center is planned with the city currently finishing an RFP for the project.

Further north, another cluster of projects is in the works in Lake Charles:

All these projects are expected to open in spring 2024.

Seeing the progress happening around him, Luna owner Dave Evans is hopeful that downtown Lake Charles is finally making a proper comeback.

"We're all at it again," he said of the effort to once more create a downtown that can draw locals and visitors alike. "We're all full speed ahead."