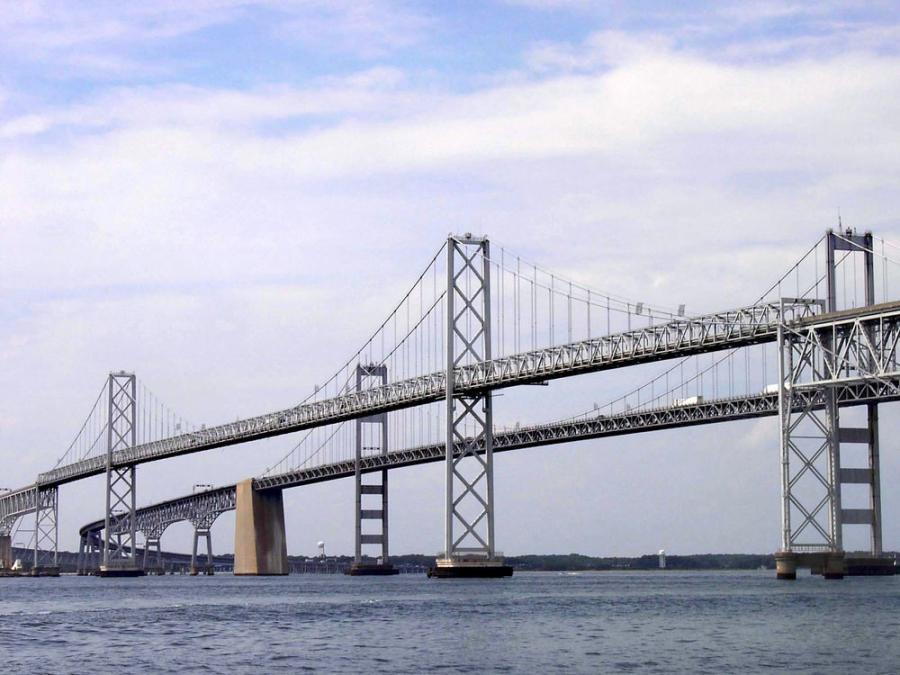 The vertical clearance of the bridge is 186 ft., and the height of the suspension bridge towers is 354 ft. eastbound and 379 ft. westbound.

Amid Maryland's state of emergency due to COVID-19, Md. Gov. Larry Hogan announced on April 1 that a project involving the Bay Bridge was completed more than a year ahead of schedule. The project, headed up by the Maryland Transportation Authority (MDTA) involved the rehabilitation of the westbound right lane deck.

"The MDTA delivered on the governor's directive to expedite the project — once slated to last up to two years — and reopen the right lane of the westbound Bay Bridge as soon as possible," said John Sales, MDTA spokesman. "The project's timeline benefitted most from the governor's decision to continue work through Thanksgiving, which provided an estimated five to six weeks of additional work time compared to the initial schedule. The schedule also benefitted from unseasonably warm weather in March that allowed temperature-sensitive concrete pours; and the decision to allow daytime weekday lane closures in certain circumstances for concrete pours." 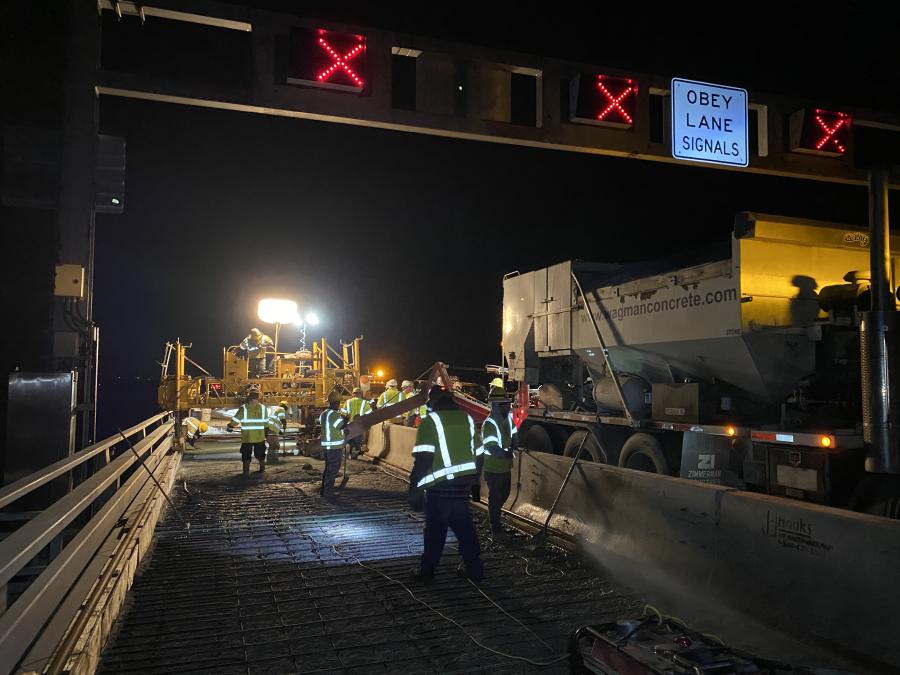 As of opening day, all new concrete had been poured and cured, work zone barriers were removed and restriping was finished.

Hogan spoke about the opening.

"Maryland is facing significant challenges these days, and of course our primary focus is on the health and safety of our citizens amid the ongoing COVID-19 threat," he said. "But it's important to celebrate the reopening of the westbound right lane of the Bay Bridge, because for me it represents the spirit, dedication and work ethic that will see our state through any crisis."

Hogan noted that the project was envisioned as taking two construction seasons to complete.

"But our dedicated employees and contractors, working to serve their neighbors and all those who use this bridge, have completed it in just over seven months — record time by any measure," he said. "The men and women who have accomplished this task inspire me, and will forever have my appreciation. They give all of us confidence that Maryland can and will emerge from any challenge faster and stronger than anyone can imagine."

Funded by toll proceeds, the $27 million project is being completed by Wagman Heavy Civil Inc. of York, Pa.

The westbound right lane of the Bay Bridge was closed in September 2019 because of severe deterioration. In one section, 75 percent of the lane was patched. 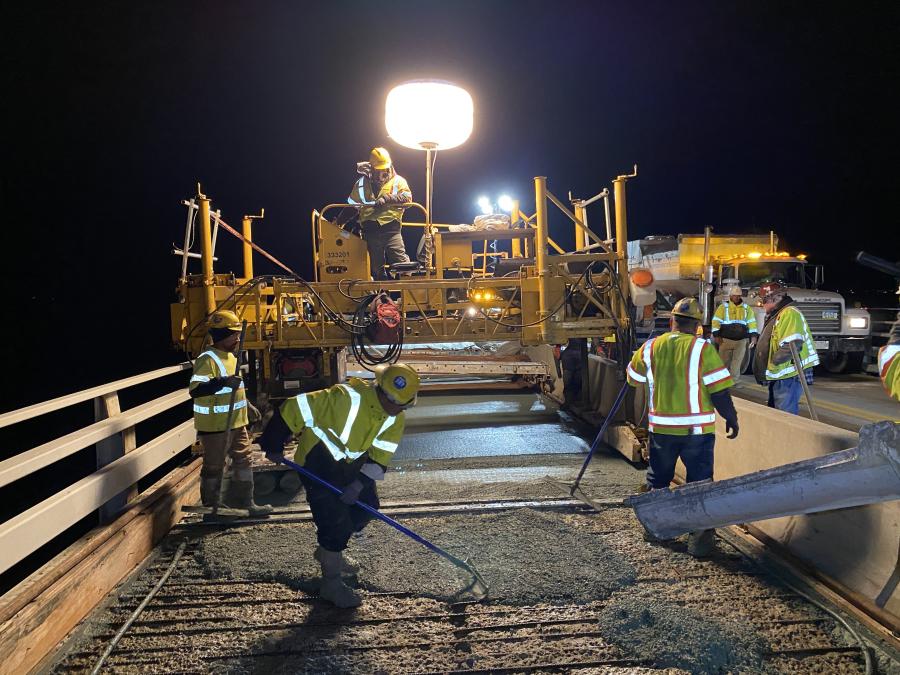 "We thank our motorists, communities and local and state elected officials for their support and cooperation throughout this project," said Md. Transportation Secretary and MDTA Chairman Gregory Slater. "I'd like to thank the men and women of MDOT and our contractors for rising to the challenge on a complex effort and in a challenging time. This will be one less thing for Marylanders to be concerned about as we rise out of our health crisis."

Some remaining work will occur on the westbound span center and left lanes during overnight/off-peak hours, including deck sealing, steel railing replacement and deck/joint repairs and replacements. Minimal traffic delays are expected, but motorists should expect some periods when steel plates will be placed in the center and left lanes.

"The largest challenge at the Chesapeake Bay Bridges is safely maintaining and operating this vital link in a cost-effective manner and without severe traffic disruptions, under the shortening work windows from ever-growing traffic volumes," Sales said. "It is widely understood that construction is typically best achieved in the summertime. However, these bridges simply do not have enough lanes during normal operations for the spring, summer and early fall traffic volumes, and so every project involving roadway work is very challenging."

He also noted that, as with any construction project, weather is always a factor. 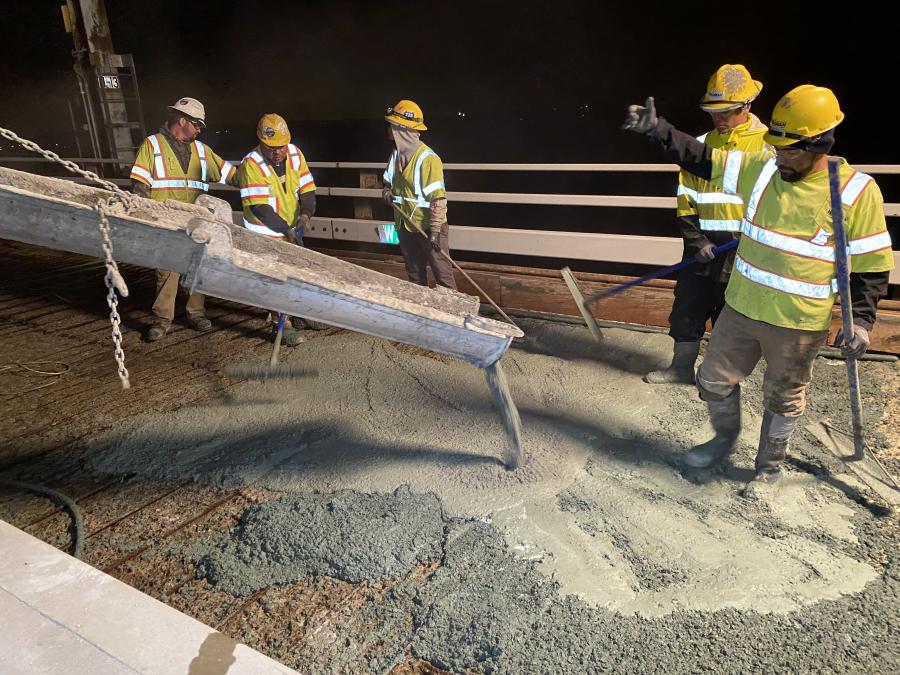 "Concrete pours can only be done in temperatures of 45 degrees or higher and require a five-day curing period," he said. "Although crews were unable to pour concrete in December, January and February due to lower temperatures, planned work still took place to remove and replace the roadway joints, repair the full depth deck punctures, and remove and replace steel railings and rail posts."

The MDTA reported that it also is leveraging the currently reduced traffic volumes to expedite installation of an automated gate system along westbound US 50 on the Eastern Shore that will allow maintenance crews to implement and discontinue two-way traffic operations at the bridge more safely and quickly.

"In addition to answering Governor Hogan's call to reopen the westbound right lane, the MDTA remains on schedule to begin all-electronic tolling at the Bay Bridge by summer 2020," said MDTA Executive Director James F. Ports, Jr. "We are nearly 70 percent complete in reaching this goal."

Crews have installed a new overhead tolling gantry across eastbound US 50 on the Eastern Shore between the bridge and MD 8. Work is under way to install and test the tolling system components. CEG