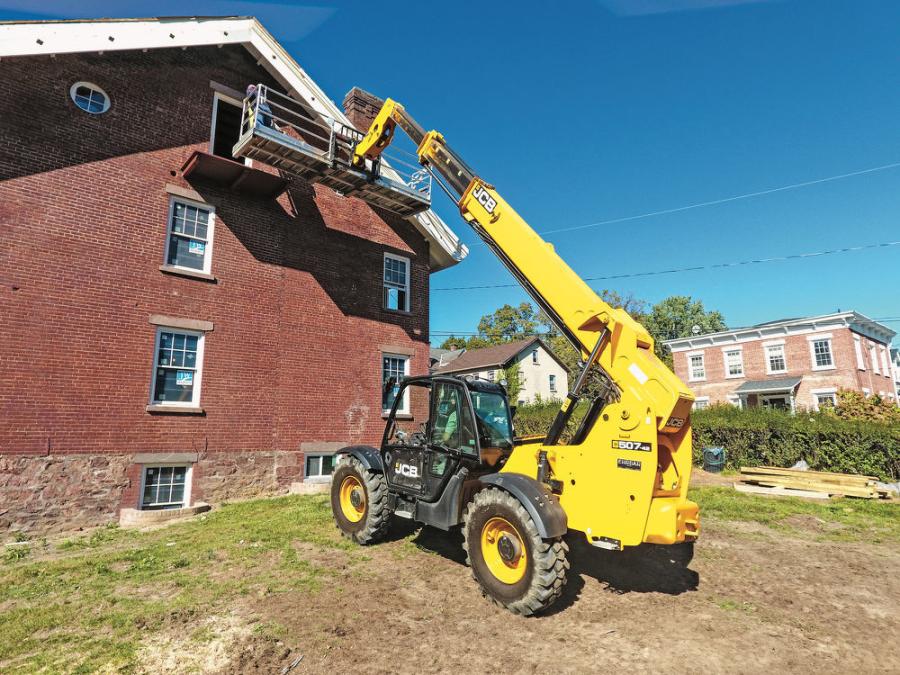 A Beacon Residential operator uses the firm’s JCB 507-42 telescopic handler on a job site in Beacon, N.Y. “From unloading tractor-trailers, to placing sheathing, to moving dirt — it’s a great all-around machine,” said Owner Tim Owen. “It’s not too large, but it’s not small. It can accommodate all our needs.”

Beacon Residential LLC, President Tim Owen considers himself a self-taught businessman. After earning a bachelor's degree in building construction in 1981, he thought he had developed a solid base of knowledge about the industry. It wasn't until he began working as a project manager for prominent contractors throughout New York that he completed his education.

“When I started out, there were no mentors who could really explain how to be business savvy,” explained Owen. “School helped me learn how to build something, but it didn't teach me how to make money. There was definitely a learning curve to the business side of the trade.”

By 2000, Owen believed he finally had the skill set to open his own company and founded Beacon Residential. Based in Fishkill, N.Y., Owen has built more than 450 homes throughout Dutchess and Westchester counties.

“We're a general contracting firm that focuses on residential projects with a few commercial sites,” noted Owen. “A lot of the work we do is on land that I've purchased — I buy vacant lots and build the entire home from the foundation up.”

To maximize efficiency, Owen's team possesses a wide array of skills. This makes it possible for them to complete jobs without subcontracting any step of the process.

“We self-perform all of the trades,” shared Owen. “We excavate the dirt, install water and sewer lines and pour the foundation. We'll frame, roof and side a house, then install the mechanical and electrical ourselves. We do everything right up to the finish trim inside. One of the guys can be an electrician in the morning and by lunch, he's digging a hole or pouring concrete.”

Today, Owen employs seven people and serves as the mentor to his team, something that he never had.

“There are four people who have been with me since I founded the company,” noted Owen. “I always emphasize to them that I'm not going to be here forever. They need to know what we're doing and why we're doing it, so that they can have a complete understanding of how to succeed in this industry.”

The firm has developed a quality reputation by meticulously analyzing every aspect of a project to ensure that the future owners will love the finished product.

“We're fanatics on perfection, and we pay attention to every little detail,” stated Owen. “Because we've been doing this for almost 20 years, we know what problems could happen at any step. That allows us to identify any potential complications ahead of time, avoid delays and create a quality home.”

Owen attributes his company's reputation to his employees. “You're only as good as the people on your team. They are in the trenches doing the work that everybody's really proud of. They're what makes the company successful — not me.”

Currently, Owen and his crew are building three new 2,500-sq.-ft. homes while also renovating a 6,000-sq.-ft. property. They are along the Hudson River in Beacon, N.Y., an area that is booming with growth. Taking on this trio of homes was an easy decision.

“I like to choose projects that excite me,” remarked Owen. “This was a no-brainer because we're working in a highly desirable area while simultaneously increasing our efficiency by building three homes at once. Adding in a separate renovation nearby helps us to stay busy, too.”

The community of Beacon has become a popular destination for New Yorkers looking to escape the city. The migration has created a demand for higher-end homes, a trend Owen hopes to capitalize on with his current projects.

“Any chance we have to get creative is exciting,” observed Owen. “People like lofts today, so we're able to incorporate them into our design with circular staircases leading up to them. We've also added vaulted ceilings and heated hardwood floors to the homes we build.”

While the residential ventures have kept the firm busy, it has also been involved with a non-profit group in the area.

“We've done several million dollars of work throughout the last couple of years for Cardinal Hayes in Millbrook, N.Y.,” said Owen. “This is a facility for the severely handicapped. We've renovated an existing wing and put an addition on to a building that helped the organization expand to meet its needs. This is home for most of the patients. We're glad to be in a position to give back to the community.”

Throughout the last four decades, Owen has built a true appreciation for each assignment he takes on.

“The biggest thing in construction is the gratification of seeing a home go up,” shared Owen. “There's a beauty in building something that I'm proud of.” 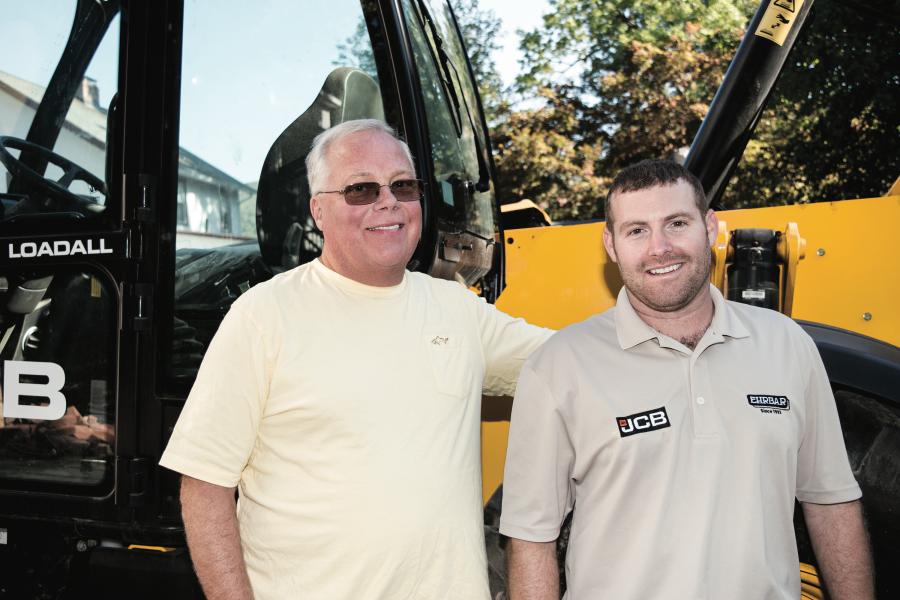 When looking for new equipment to create his unique structures, Owen turns to Ehrbar Sales Representative Ben Brownell for assistance. After testing a new JCB 507-42 telescopic handler in 2017, Owen knew it was the perfect machine for his jobs.

“I've been pleased with the handler's productivity,” said Owen. “I wanted a new machine with multiple functionality, so I wouldn't have to worry about maintenance. The 507-42 has exceeded my expectations.”

The JCB handler has a 42-foot reach and is rated for 7,000 lbs. With a 75-horsepower engine, it meets Tier IV emissions standards. The clean-burning engine does not require aftertreatment or selective catalytic reduction, allowing Owen to use it for virtually every step of the homebuilding process without any downtime.

“From unloading tractor-trailers, to placing sheathing, to moving dirt — it's a great all-around machine,” said Owen. “It's not too large, but it's not small. It can accommodate all our needs. The handler also has four-wheel steering and can maneuver around the buildings quite easily where a bigger machine would have an issue.” 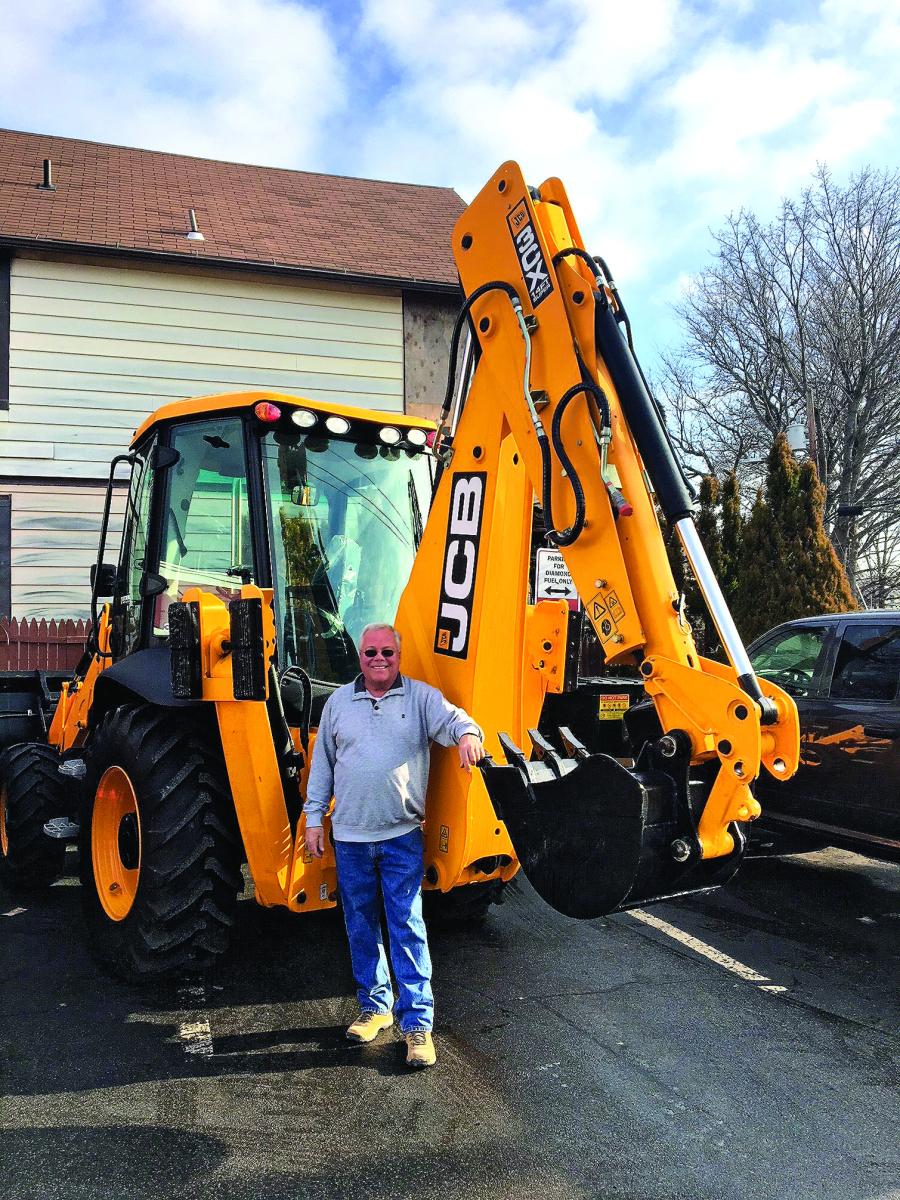 In addition to the JCB handler, Owen acquired a 2018 JCB 3CX-14 backhoe from Ehrbar and is highly impressed with its performance. When purchasing new equipment, versatility of the machine is only one of the factors he considers. Owen also prefers to work with someone he knows will provide excellent support; that's why he relies on Ehrbar.

“The people who stand behind the machine are an important factor when purchasing equipment,” said Owen. “I've known Ben for a while. He made it comfortable for me to buy the machines because he's talked so highly about them. He's always steered me right in the past, and I know I can trust him going forward.”

Throughout the last 40 years Owen has worked tirelessly to help his company thrive. Often putting in 60 to 70 hours a week, he has dedicated his life to his job, which he believes has led to his success.

“I never quit,” stated Owen. “In life, it's important to set goals and remember that nobody gives you anything. You have to love what you do, but you've got to earn it.”

(This article originally appeared in the Ehrbar Advantage Magazine which is produced by Construction Publications, Inc.)