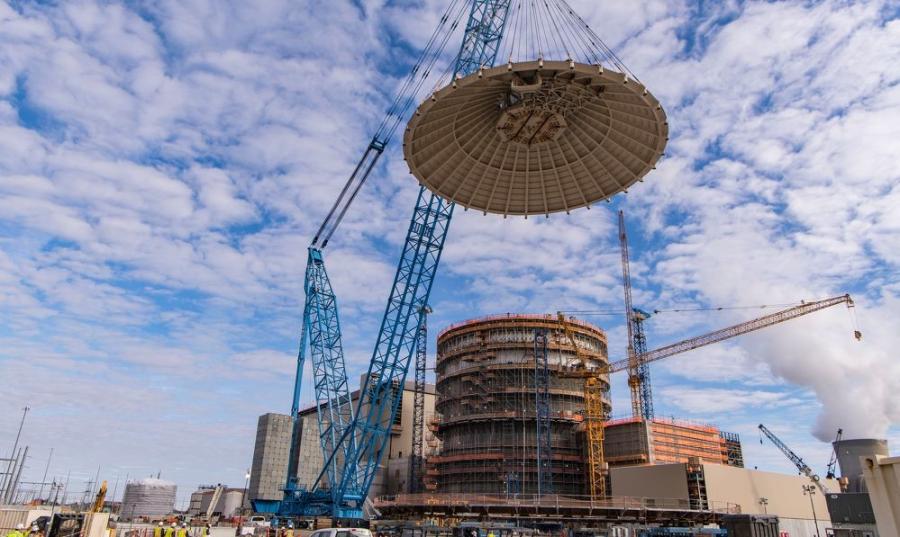 The project has continued to face significant challenges to performance, particularly in the areas of construction remediation work, work package closure, system turnovers and subcontracted scopes of work, all of which have been exacerbated by the impacts of the COVID-19 pandemic onsite.

Bechtel and its subcontractors are putting in a herculean effort to complete the new nuclear reactors, Units 3 and 4, located at Georgia Power's Alvin W. Vogtle Electric Generating Plant in Waynesboro, Ga. 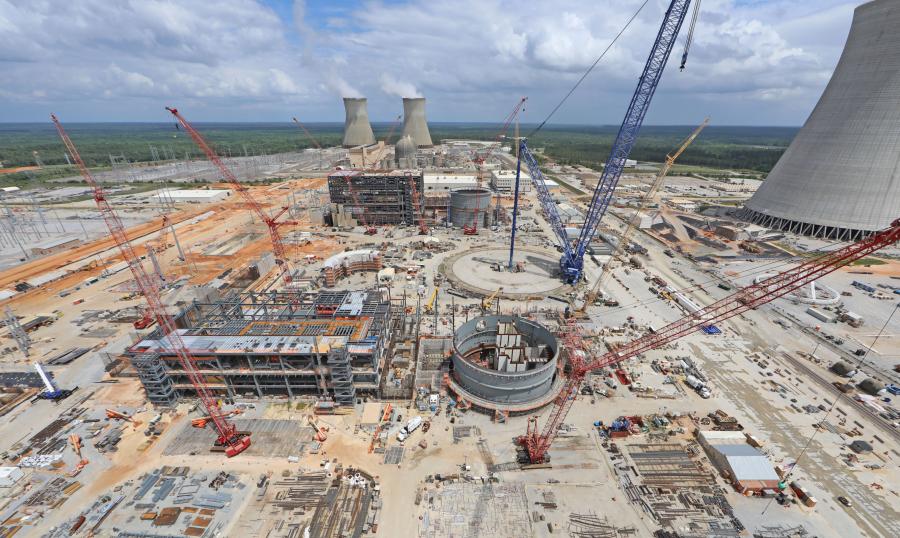 "We knew building the first new nuclear units in the U.S. in more than 30 years would be challenging, but the project has endured extraordinary circumstances during construction, including the pandemic as the most recent," said Jeff Wilson, Georgia Power spokesman. "Through it all, the project has endured and overcome multiple challenges. Vogtle 3 and 4 remains a critical investment for this state and, once the new units are online, they will provide low-cost, reliable and emissions-free electricity for the state of Georgia for at least 60 to 80 years."

As the largest construction project in the state, Georgia Power's Vogtle project employs more than 7,000 workers and will lead to 800 permanent new jobs upon completion. The construction crews are using many cranes, excavators, dozers, loaders and other standard pieces of equipment.

"The project has continued to face significant challenges to performance, particularly in the areas of construction remediation work, work package closure, system turnovers and subcontracted scopes of work, all of which have been exacerbated by the impacts of the COVID-19 pandemic onsite," stated the Vogtle Construction Monitoring Report. "The project team continues to prioritize safety and quality over schedule. With these key tenets in mind, the project team is working closely with Bechtel and other subcontractors to remove barriers to production, where possible, and to support their efforts to increase production in a safe and quality manner. The project team also continues to monitor the impacts of the COVID-19 pandemic and potential risks to the health and safety of workers onsite and in the community, as well as the progress necessary to meet the project's projected in-service dates."

The report estimated that productivity impacts due COVID-19 "consumed approximately three to four months of schedule margin previously embedded in the site work plans for both units, with an estimated cost of $160 to 200 million."

As of Feb. 7, the total project was approximately 95 percent complete. 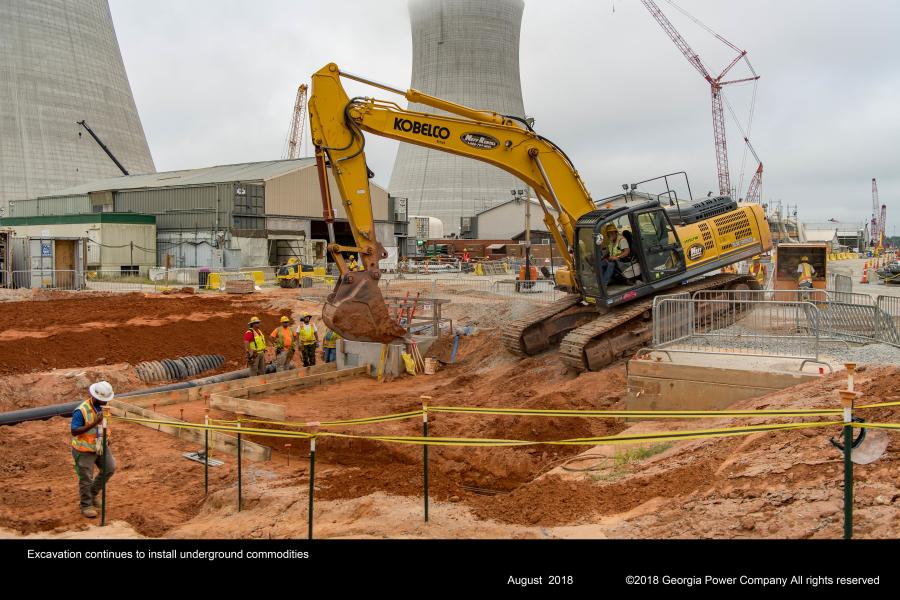 Engineering and design for nuclear reactors is part-in-parcel of the initiative and everything had to be perfect thought out before construction could begin. And even when work began, changes and design upgrades were a given.

The CEO continued its involvement in the ASME Nuclear Component Stamp (N-Stamp) approval process and work package closure," it added. "The NRC utilizes the N-Stamp to ensure safety-related piping systems, pumps, and other equipment meet the quality requirements set forth under the ASME Boiler and Pressure Vessel Code."

Crews are making progress on several fronts. For the Unit 3 Nuclear Island, where major steps were achieved toward its completion of and in support of the fuel load milestone. This facility is comprised of the auxiliary building, containment vessel and shield building.

"The project is committed to completing the remaining work scope in support of the final regulatory requirements prior to loading of fuel," states the report. "Unit 3 achieved the most notable testing milestone to date with the completion of HFT, which successfully demonstrated the plant's ability to operate at NOT and NOP. The final stages of electrical and I&C work remain to support Unit 3 fuel load. Between the walls of the shield building and the containment vessel, the installation of air baffles has commenced. The air baffles are one of the final mechanical components to be installed and are part of the passive containment cooling systems.

"Construction is focused on area completion and turnover to site operations, " it added. "Activities to support area completion include coatings, HVAC finalization, specialty door installation and various other architectural finishing activities. During the reporting period, a leak was discovered in the floor of the spent fuel pool ("SFP"). After thorough testing and analysis, SNC decided to replace the floor of the SFP. Installation of the new floor panels is progressing, and while currently on critical path, the risk to Unit 3's schedule for this issue has decreased." 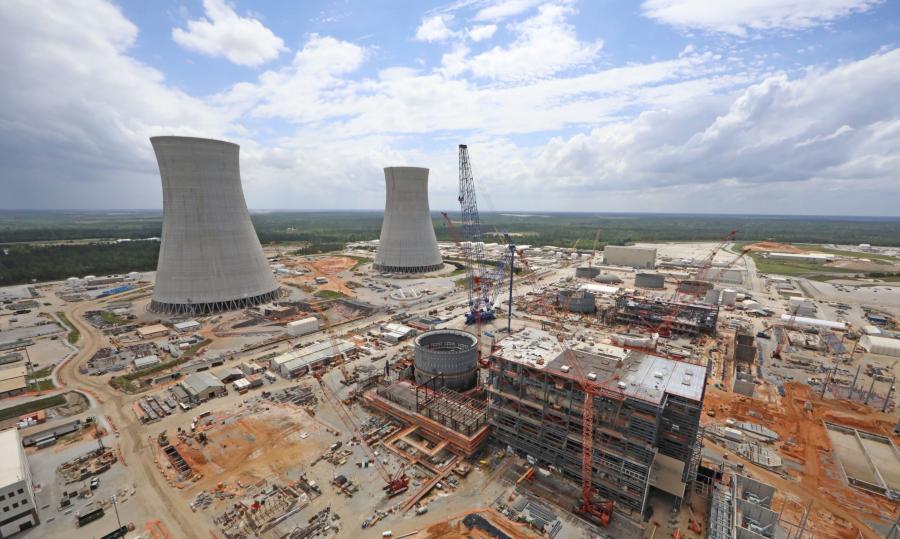 The key benchmarks were the completion of the CB20 civil work and air handling systems in support of air balancing and HFT, commissioning of four divisions of the PMS, running the RCPs under standard operating conditions and the turnover of the cask crane to ITP.

‘During the next reporting period, work inside containment and the auxiliary building will support post-HFT activities and will conclude as Unit 3 performs final preparations for loading fuel," stated the report. "Subcontracted scopes remained in focus during the period as they supported successful completion of HFT and specific focus on final scopes of work to support fuel load, including electrical penetration seals, coatings, insulation and fireproofing throughout the Nuclear Island."

The Unit 3 Turbine Building conducted a successful Turbine Roll as part of HFT.

"The primary focus in the coming months is finalizing all critical activities required to support the fuel load milestone, including the demobilization of scaffolding and the turnover of rooms and areas to site operations" states the report. "Electrical work remains a key focus area in support of the final system turnovers to support fuel load."

Additional accomplishments included the completion of the overspeed turbine trip test during HFT and the gravity and roof drain collection system.

"Construction of the annex building final room layouts continues with the installation of gypsum board, tile, permanent lighting, electrical, and architectural finishes," states the report, "Turnover of jurisdictional control of rooms from construction to site operations has commenced in support of area turnovers."

Key accomplishments include: mechanical completion of the Unit 3 annex building and installation of the architectural finishes (walls, doors, tile, and acoustical ceilings).

"Several areas are now in use by SNC operations and TCC support personnel," states the report.

For the Unit 4 Nuclear Island, "Construction focused on mechanical and electrical bulk commodity installation in support of the systems necessary for IF and IE milestones" states the report. "Additionally, significant civil and structural work continued on the Unit 4 Nuclear Island. Externally, progress included the topping out of Unit 4 with the setting of and concrete placements for CB20. Work continues in support of the ongoing CB20 concrete placements. Internally, work on the Reactor Vessel Internals ("RVI") continued, which was sequenced using lessons learned from Unit 3. The plan to allow Unit 4 subcontractors to progress ahead of Unit 3 sequence has allowed them to make substantial progress due to lower craft density and has the potential to substantially reduce the number of work fronts which are congested during bulk electrical work.

"The HVAC, coatings, insulation and fire protection/detection subcontractors are substantially ahead with their progress on Unit 4 as compared to the same point on Unit 3," it added. "Following the discovery of a leak in the Unit 3 SFP, SNC proactively inspected the Unit 4 SFP for similar issues and determined that they did not exist on Unit 4."

Crews have commenced with the flushing of systems for IF; completion of portions of the plant control system, piping to support secondary hydro, and the civil wall and roof placements at elevations of 165 and 180 ft.; and the energization of several critical systems for the first time. 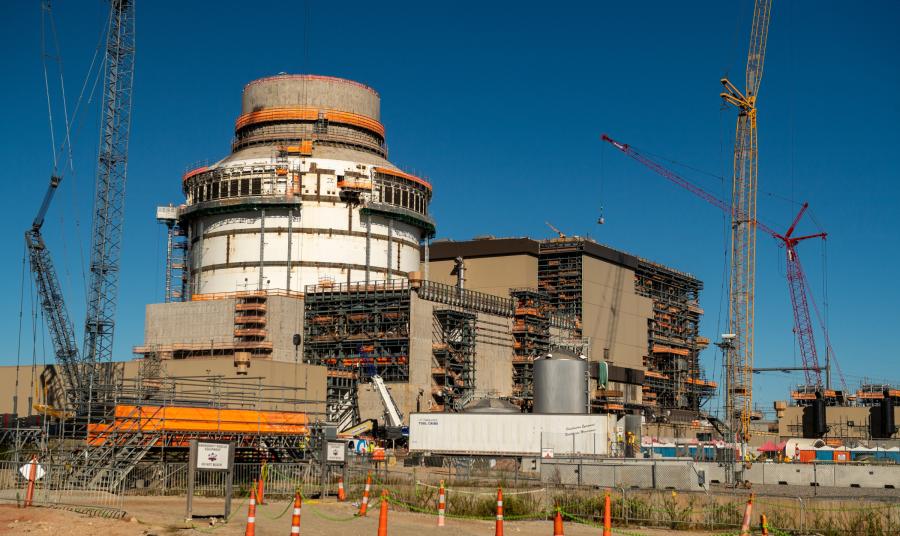 Work on the Unit 4 Turbine Island is moving quickly, with electrical bulk commodity installation progressing in support of the IE milestone.

"Mechanical work remained a primary focus,, including the installation of piping supports for multiple systems throughout the Turbine Island," stated the report, which noted that the bus Duct and cable bus installation to support IE were completed.

Construction of the Unit 4 annex building continued with the placement of concrete for walls and floors, as well as installation of mechanical equipment, electrical equipment, cables, piping, and terminations to support upcoming milestones. Key accomplishments were the placement of concrete slab at an elevation of 173.7 ft., the installation of bulk cable pulls to support upcoming testing milestones, and setting air handling unit VXS-MS-07A at an elevation of 135 ft. in Area 3.

Work also is ongoing in the balance of the plant (BOP) areas, where the focus has been on preparation for turnover to site operations, including site security work, final paving and grading and demobilization of temporary structures and support systems.

"The placement of the Unit 4 spent fuel crane was the final lift for the large Lampson crane before it was demobilized," stated the report. "In preparation for Unit 3 site operations, Bechtel and SNC together executed coordinated work related to the SNC-managed security subcontract scope, which included the installation of security fencing between Units, personnel and vehicle access points, and multiple bullet resistant enclosures (BRE).

"Upon completion of the Unit 4 CB20 setting, the area utilized for structure assembly was repurposed for the demobilization of the Lampson crane and Unit 4 support structures," it added, "allowing for work on security structures and support systems including additional portions of the vehicle barrier system. Work will continue with completing the Unit 3 security requirements and final site preparations in support of fuel\load later this year." CEG