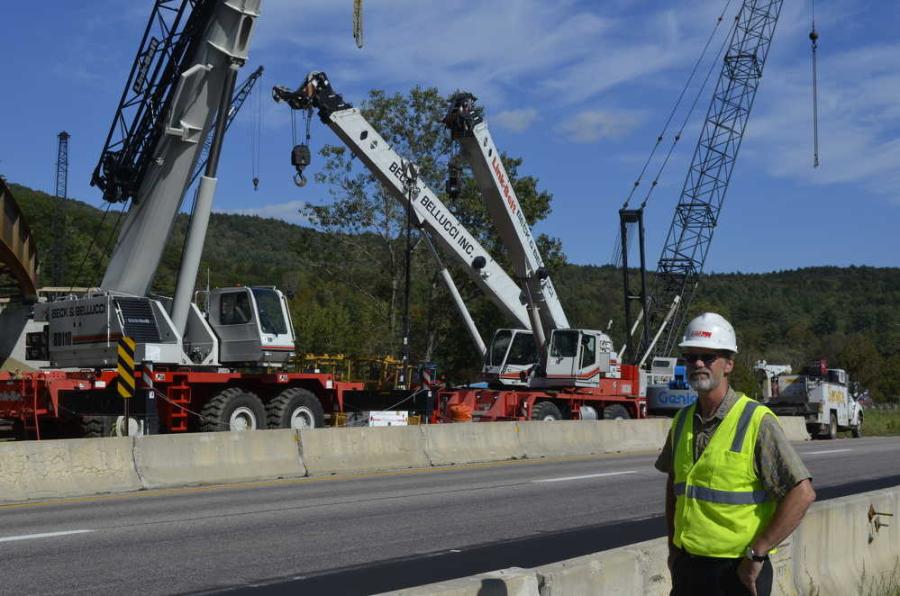 From the mountains to the highways. That's the path Achilles Bellucci and Allan Beck's company took on its way to becoming exclusive bridge constructors.

In 1947, friends Bellucci and Beck teamed up to build some of the country's first ski lifts. Shortly thereafter, the pair shifted gears to focus on bridge construction.

Today, the company, which was purchased and incorporated in 1979 by current owner David Hurst, is focused exclusively on bridge construction and is a prequalified bidder in the states of New Hampshire and Vermont. Headquartered in Franklin, N.H., Beck & Bellucci employs between 20 and 70 workers, depending on the season.

Nearly all of Beck & Bellucci's bridge work is done for state highway authorities and townships. Currently the company is involved in four projects:

1. The construction of a replacement bridge for Route 2 over I-89 in Middlesex, Vt;

4. The rehabilitation of seven bridges on I-393 in Concord, N.H.

Located approximately 2 mi. east of the intersection of U.S. 2 and VT 100B, the 660-ft. long, 35-ft. wide, nine-span bridge is in poor condition. It will be replaced by a wider (40 ft.) but shorter (512 ft.) three-span bridge. The new bridge is being built adjacent to the existing steel girder bridge, which will be taken down upon the completion of the new bridge.

This $9.5 million project began in August 2016 and has an estimated completion date of June 2019. Beck & Bellucci is the general contractor of the project and the project authority is the Vermont AOT (Agency of Transportation).

“Our single biggest challenge on this project is that we have an extremely small footprint to work within. This bridge crosses not only I-89, but it also crosses the Vermont Central Railroad and is bordered by wetlands.”

Due to traffic on I-89 and the Vermont Central Railroad's train schedule, Beck & Bellucci has to work around very limited work windows. Whenever it is doing steel setting, one lane of I-89 has to be shut down. To accommodate motorists, the company was only allowed to work between 8 p.m. and 6 a.m. setting steel.

“We are also not allowed to interfere in any way with train traffic,” Sackett said. “Anytime a train is in the vicinity we, again, cannot set steel. The railway has their own flagman, who is on the site at all times to alert us to approaching trains.”

Another challenge to the project is greater than anticipated uneven bedrock beneath the ground surface, which has made the driving of H piles extremely challenging, according to Sackett.

“We were given rough estimates of where the bedrock lies and how it runs, but it has turned out to be wildly erratic, which means if we underestimate the depth of the bedrock we have to splice H-pile extensions in order to complete the pile driving.”

The other challenge on this project is the existing wetlands that border the project. This is primarily a challenge from the standpoint that it extremely limits the footprint of where Beck & Bellucci can work, Sackett said.

The biggest investment that a bridge builder has in its equipment fleet is its cranes, and Beck & Bellucci's entire fleet is made up of Link-Belt cranes, which were purchased from Woods CRW Corp. On this particular project six Link-Belt cranes are being utilized:

“We have had a very long relationship with Link-Belt and their New England dealer, Woods CRW Corp,” Sackett said. “We have been using Link-Belt cranes nearly exclusively for the last 20 years and we use Woods CRW for the purchase, service and support of this fleet.

“Both our company and Woods CRW are family-owned and as a result, I feel we share many of the same values and commitment to protecting our companies' reputations.”

For this particular job, factoring in the small footprint for the Link-Belt cranes has been a major benefit.

“When you need to access various points of a 500-foot span from a postage stamp-sized staging area the reach and lift capabilities of the cranes are critical,” Sackett said. “The chart on the Link-Belts is very important because when we work near the railroad, they require us to de-rate all cranes by 50 percent. In other words, if the chart says you can lift 75,000 pounds at 40 ft., they will only let you lift 50,000 lbs. at 40 ft. radius. So, every pound you can lift more than the competition is very important,” Sackett said.