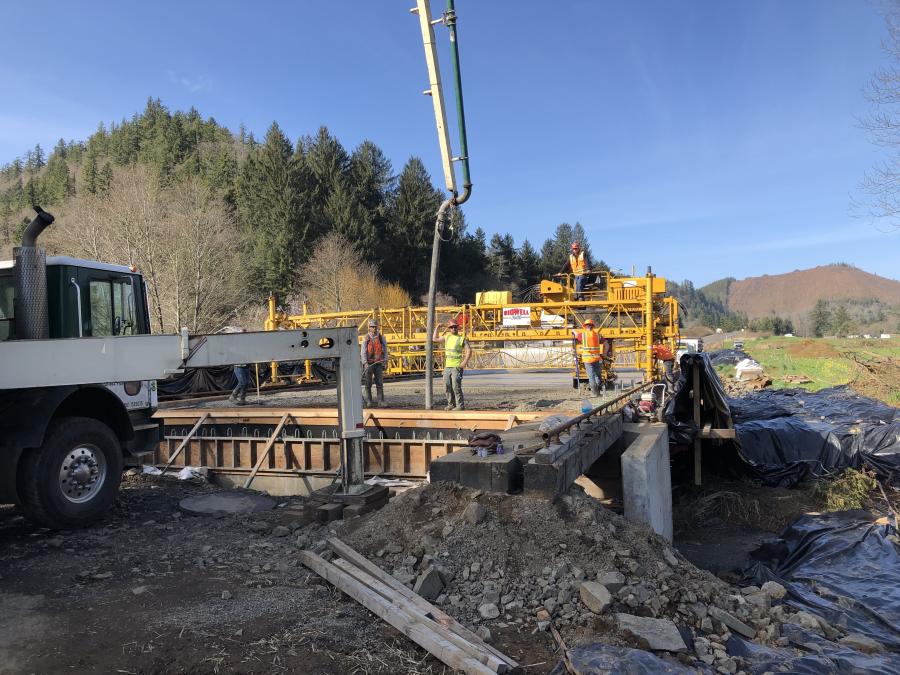 Bent LLC is the general contractor for the $4.3 million project that began in November 2019.

Bent LLC is in the midst of replacing the Farmer Creek Bridge on U.S. 101 just north of Hebo, a structure built in 1916, for the Oregon Department of Transportation (ODOT).

The existing 27-ft. long, two-lane steel bridge is being replaced with a concrete, 80-ft. long and 50-ft. wide, two-lane single span bridge. The new bridge and road infrastructure was designed by ODOT in-house engineers, with Michael Jacobson as the engineer of record.

Work on the $4.3 million project, financed by state dollars, began in November 2019 and is expected to be completed later this fall.

An ODOT report on the bridge's condition stated that "significant scour was starting to occur under the northern abutment."

Bent has completed Stage 1, the larger stage, of the two-stage project. 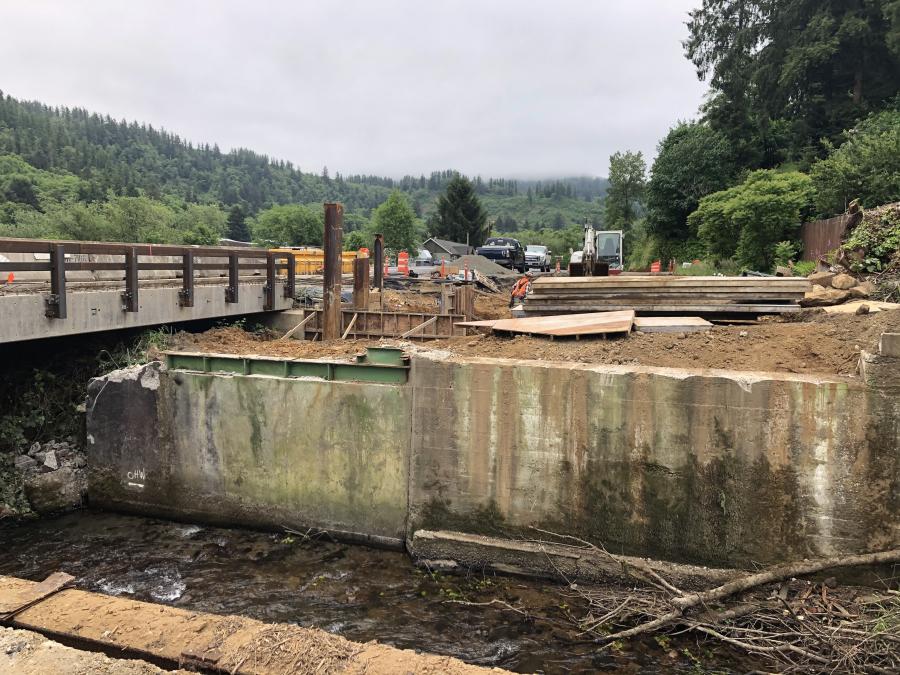 "We've completed all of the driven piling and set the nine prestressed concrete slabs [box beams] on the cast-in-place superstructure for two lanes on the eastern portion of the bridge and we've done the major road work/reconstruction up to the bridge — about a quarter-mile on each side," said Dale Sorensen, Bent's project manager.

The second half of the bridge required crews to set the three slabs for the west side of the bridge and to get the top lift paving done on the road, according to Sorensen. This stage of the project was completed by the end of September.

While the project may be on the smaller side, it is still complex and cooperation and communication between the departments of transportation and the general contractor has been essential.

"From the beginning, we had to drive pile," said Sorensen. "ODOT did a really good job in design planning before the project bid by allowing us to drive piles through the existing roadway that saved money and time as it eliminated a second pile driving mobilization and set up. When we were driving the piles, the capacities were good, but the depth of pile came up way shorter than anticipated. We worked with ODOT to take additional pile driving records and they went back to their designer to make sure that we are okay. When something like this comes up, it was great to see ODOT make the issue a priority so we can get a quick turnaround to save money and time.

"Another challenge was building a full-width bridge while maintaining traffic flow — we always had to allow for traffic and wide loads," he added. "This is a very active fish bearing stream on the Nestucca River, which is big for fishing and recreation, so it is important to recognize we are in an environmentally sensitive area."

The new bridge, designed to allow for a future widening, has 12 slabs procured from RB Johnson, a local precaster in McMinnville, Ore. 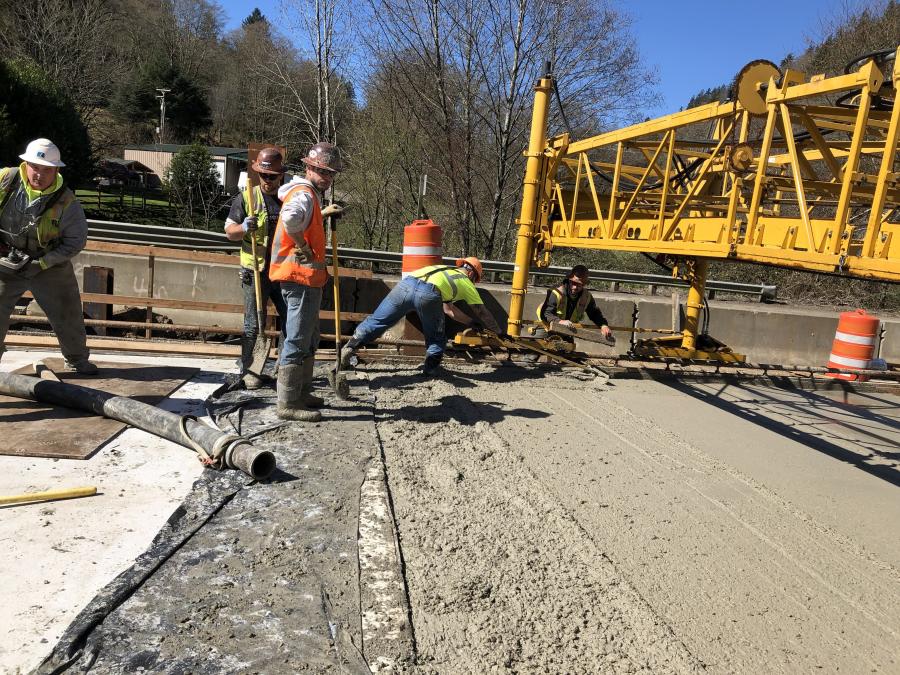 "It is longer because the old bridge restricted the stream, being so narrow," said Sorensen. "Staging is important and instead of building a detour, we built the first half of the bridge that can handle two-way traffic next to the existing bridge."

The schedule also allowed for winter work, which gave Bent crews the opportunity to meet benchmarks earlier and jump into the in-water construction phase. This eliminated the need for two in-water work windows .

The east side of the bridge was constructed between January and April. This required 18 piles to be driven to a capacity of 640,000 lbs. each. The nine box beams, each weighing 86,300 lbs., were set in one day via the use of two cranes.

"We were pretty happy with that, especially when they were all trucked in from McMinnville [Ore.] to the coast," said Sorensen. "The trucks were staged down the road and proceeded to the bridge one at a time because we didn't have the space. That was one of the coordination challenges."

Chris Dials Contracting LLC, a local firm, was brought in to do the earth work, road work and demolition of the bridge. The heavy rains in the coastal range of Oregon were factored in.

"ODOT anticipated the subgrade not being solid enough, so we had to do subgrade stabilization under all the asphalt on [U.S.] 101," said Sorensen, who noted that the dirt didn't hold up in the area due to the widening. "We placed three feet of stone embankment as our subbase, followed by 12 inches of ¾ minus for the aggregate base, and 12 inches for the asphalt top. There was a 24-hour flagging operation running traffic in one lane while the crews were working on the other side. We were bottlenecked with only two lanes."

A Delmag D30-32 pile driving hammer was critical for the pile driving operations. This large hammer, weighing more than 20,000 lbs., had to be brought in to achieve the required bearing capacities. 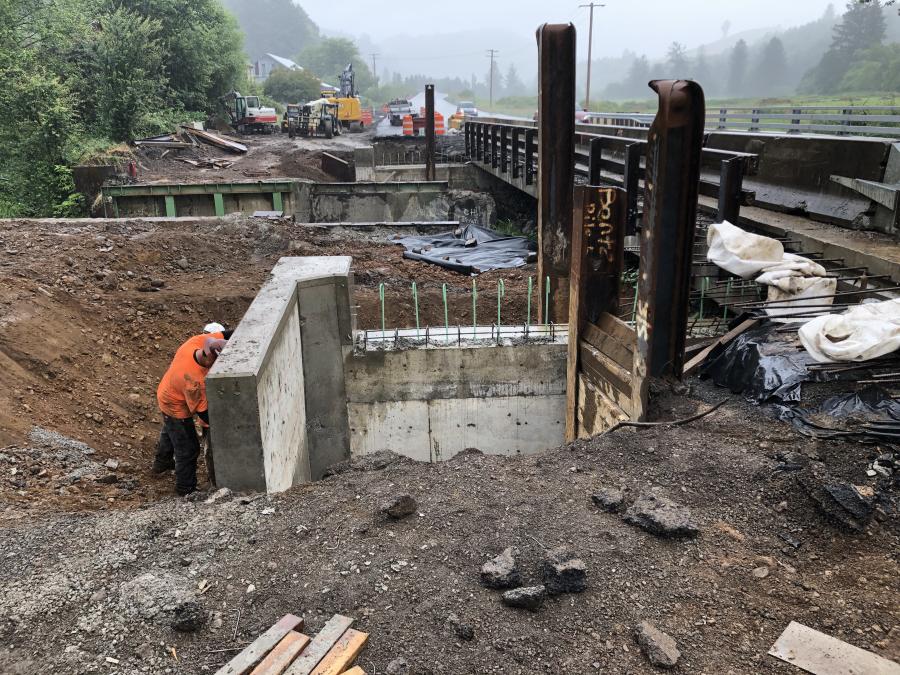 "For the box girder settings, we used two Link-Belt 100-ton cranes that allowed us to get close enough to the bridge site," said Sorensen. "Without these pieces of equipment, this job would not have been able to go forward."

Assisting Sorensen is Jeremy Hiebert, Bent's on-site superintendent who was on-site every day.

"We have a good group and are thankful for the guys we work with," said Sorensen. "One of the challenges of working in winter is that the county averages 120 inches of rain. Despite this, the guys always had good attitudes, making jokes about how wet it was and maintaining the schedule during the heavy rains."

There are approximately six Bent and subcontractor employees at the construction site, with the major subcontractors being Benthin Land Surveying; Baker Rock for paving; Columbia River Contractors for guardrail; and Fox Erosion Control.

The road realignment, also part of the project, will improve visibility for local residents, motorists and boaters using Farmer Creek Road and coming in and out of the wayside. Other work includes widening the existing roadway and providing new striping and traffic signs. New guardrails and other improvements will be made to the wayside.

The construction requires lane constrictions and flagging for the duration on the work. The wayside and boat launch has been closed for various stages during construction.

"During closures, river users will need to use alternate launches," stated the project web page. 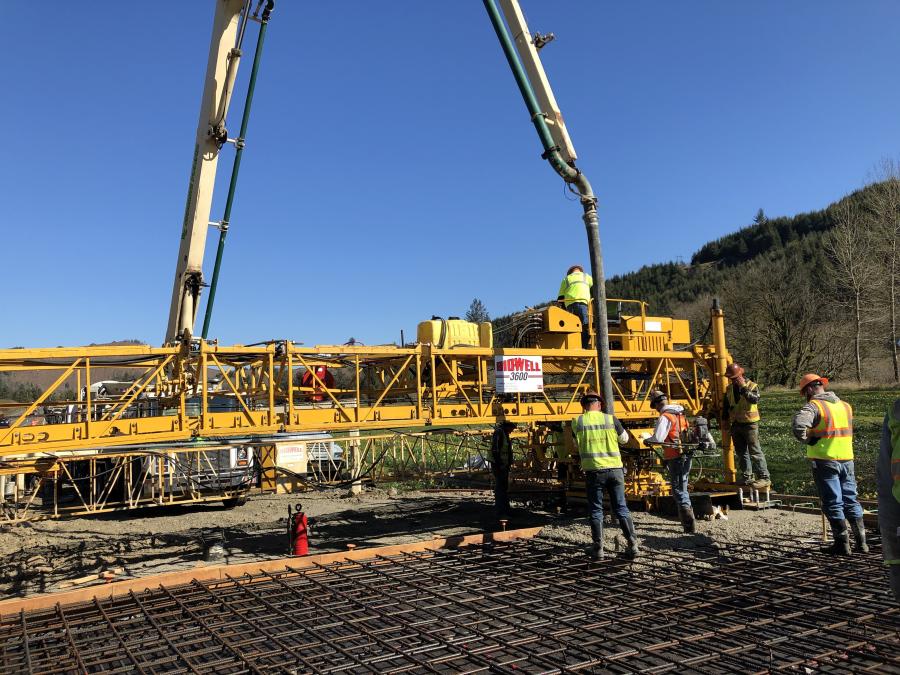 "The most up to date impacts will be on TripCheck.com.​ Access for pedestrians, including those with disabilities, will be available and identified through or around work zones.​"

Crews had to prevent debris and material entering the water to minimize turbidity (murky water).

"During the in-water work window, we have to monitor the turbidity," said Sorensen. "If we make the water too dirty, we would be shut down and have to revisit our means and methods. When we started the demolition of the existing bridge our subcontractor, Chris Dials Contracting, put up a tarp to protect the stream from the demo debris. He has also started the stream reconstruction by placing a bypass pipe to keep the water flowing while we put in stream rocks, fish logs and reconstruct the banks."

The remaining road work involves the placement of swales and a drainage system, and the top lift paving.

The totals for the bridge demolition and excavation of adjacent roads — concrete, asphalt and wood — are still being tabulated.

"We were able to team up with local farmers to dispose of the earth and rock that was excavated," said Sorensen. "The guard rail was recycled and the lead beams were disposed of at Cherry City Metals."

New materials include 250 yards of concrete and 3,700 tons of asphalt.

In addition to the cranes, Bent is utilizing an Ingersoll Rand reach forklift and a bobcat mini-hoe.

"We didn't run into any major equipment challenges on this job," said Sorensen.

Bent purchases and rents equipment from dealerships such as Wilson Equipment in Salem, Oregon. CEG