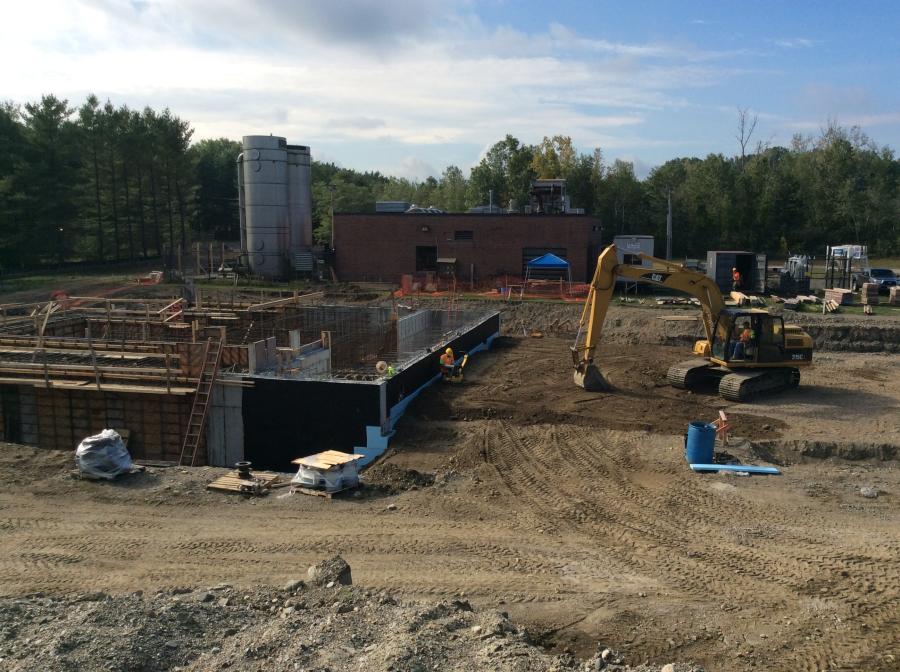 This past summer, the Shrewsbury Water and Sewer Department broke ground on New England's largest biofiltration plant. Though the project was slated for $14.5 million, the winning bid came in at $11.5 million from Waterline Industries of Seabrook, N.H. This amount is exclusive of an additional $900,000 for engineering services and a contingency of five percent — approximately $575,000. The new water treatment plant is scheduled to be completed by Dec. 29, 2018.

The town currently uses the Home Farm water system built in 1990 by R.H. White Construction. The Home Farm system employs airstripping to remove volatile organic compounds from the water. Over the last few years, however, the manganese levels have risen to degrees that exceed the filtering capabilities of the Home Farm system necessitating a new solution.

The Massachusetts Environmental Protection Agency (EPA) states that the recommended water concentration limit for lifetime exposures to manganese is 0.3 mg/L (300 parts per billion), with special concern for infants under one year. Currently, the manganese levels of the water in Shrewsbury are at 200 ppb, well within the safe limit. Everyday foods such as whole wheat bread and cooked brown rice can contain up to 1,070 ppb of manganese — a mineral that promotes proper body function. The main concern is the aesthetic quality of the water, with reports of discoloration due to the high mineral levels.

The Shrewsbury Water and Sewer Department piloted three different systems adept at filtering high levels of manganese before deciding on biological filtration. Biofiltration dates to the early 1900s when Europeans used it to filter surface water for drinking purposes. The procedure employs natural processes rather than chemicals to extract contaminants from the water. The Shrewsbury plant will rank second in size in the U.S. behind Lake Havasu, Ariz., and the largest to date in the Northeast.

According to the U.S. EPA, “Biological filters remove contaminants by three main mechanisms: biodegradation, adsorption of micropollutants, and filtration of suspended solids. The microbial growth attached to the filter media (biofilm) consumes the organic matter that would otherwise flow through the treatment plant and ultimately into the distribution system. The end products are carbon dioxide, water, biomass, and simpler organic molecules.”

“Once the new system is in place, it will take about a year and half to completely flush the system,” noted Robert Tozeski, Shrewsbury Water & Sewer Superintendent. The biofiltration plant will filter seven million gallons of water per day.

The 8,580-sq. ft. building will require 4,000 cu. yds. of excavation — most of which will be used as backfill — and 1,200 cu. yds. of concrete. The new treatment plant will be built adjacent to the existing system. Upon completion of the biofiltration unit, the current system will be demolished by Waterline as part of the contract.

Waterline has engaged a handful of Massachusetts subcontractors including PJ Spillane Co. of Everett for waterproofing the new tanks and concrete; Cenedella Masonry of Millford for masonry work; Tata & Howard Engineering of Marlborough for design, and SOEP Painting of Lawrence as the painting and coating subcontractor. Xcel Fire Protection of Salem, N.H., for design, furnishing and installation of the sprinkler system.

“The project is going very well so far. The tanks need to be placed before the roof is set in December, so the timing is critical to avoid a potential weather impact to the schedule,” noted Josh Duchesne, Waterline project manager. “Everyone at the town as well as Tata & Howard have been extremely helpful in facilitating the start of this project. It's been a great team and project to be a part of.”

Waterline is running one shift with six to ten crew members on site, depending on the concrete pour schedule and availability. Other than minor yard piping modifications to existing utilities, no plan changes have occurred.