The Block Sports Co. wants to develop a comprehensive destination resort best compared to that of the Disney World Resort in Orlando. 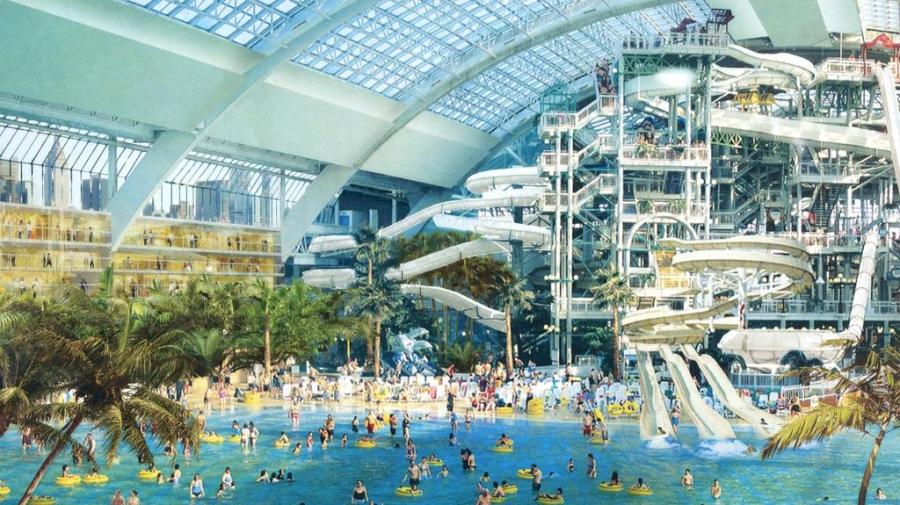 A sun-drenched land of rides, attractions and hotels may be coming to the Arizona desert near the junction of Interstate 8 and Interstate 10 in Casa Grande, Ariz. (The Block Sports Co. photo)

A sun-drenched land of rides, attractions and hotels may be coming to the Arizona desert.

The Block Sports Co. of Orlando, Fla., has submitted a proposal to build an estimated $4 billion Disney World-like 1,500-acre themed amusement park and resort called Dreamport Villages near the junction of Interstate 8 and Interstate 10 in Casa Grande, Ariz.

In February, developers with The Block Sports Co. filed a proposal with the city of Casa Grande to bring the "world class entertainment" amusement park and resort to the area.

The Block Sports Co. wants to develop a comprehensive destination resort best compared to that of the Disney World Resort in Orlando. The project would take at least eight to 10 years to complete.

A Disney World-sized project would be a massive undertaking. It is not a perfect comparison, because Disney purchased a much larger, 25,000-acre property comprised of barren swampland for Disney World. Purchased in the late 1960s, Disney transformed it into the world's leading theme park resort.

A 45-mi. network of drainage canals had to be built. Millions of trees and shrubs were planted. Entire lakes were excavated.

Four huge theme parks were eventually built as well as two water parks, a shopping and entertainment district and dozens of hotels.

A fleet of heavy equipment including bulldozers, excavators, cranes, pavers, backhoes and trucks were needed to keep the project progressing.

Actual construction of Disney World began in 1969. About 9,000 workers were needed over the next two years.

Dreamport Villages has no swamps to fill, but it is large and complex in design. And it would feature daytime fun, nightlife and shopping much like the Disney theme parks.

"We are not building 'Disney,' but Dreamport Villages will be the most exciting entertainment destination in the world," The Block Sports Co. wrote on its Facebook site in February. The company also reported, "Someone let the cat out of the bag as we were trying to keep this under wraps while completing our government approvals."

The commission made a recommendation that the city council approve the south and north village PADs, subject to conditions.

"In both applications, the establishment of the new land entitlements and their respective development regulations is the first step to any future development," said Jim Gagliardi, planner of the city's Planning and Development Department.

A date for city council consideration has not been set. Gagliardi said he doesn't expect the council to address the recommendations until July or later.

With city council approval, the next step would be the submittal of plots to subdivide the property and major site plans that denote the layout of structures and features onto a particular lot. The developer also might be required to obtain on- and off-site development permits for a water campus and sewer treatment facility.

Gagliardi said many factors add to the cost of such a massive project, including utility extensions and infrastructure needed to serve the site. Also, a traffic study that considered project impacts, identified a need for interchanges on I-10 and I-8, as well as a new road with an overpass at Union Pacific railroad tracks.

Interchanges would need to be built at I-10 and Selma Highway and at I-8 and a new road that follows the Henness Road alignment.

"If Selma and I-10 isn't constructed, an alternative is to construct a road to Florence Boulevard," Gagliardi said.

Dreamport Villages would not only feature entertainment areas like an indoor water park and rock climbing facility, but also a new school, new homes, large hotels, stores and restaurants.

An amusement area called The Wild would be an animal-themed park with animals and rides, including canoe rides, a carousel and a log flume. It also will have animals, animal shows and a hotel.

Another area called The Marketplace would feature up to 420,000-sq.-ft. of restaurant, retail and office space.

The North PAD would feature the amusements, rides, water parks and sports attractions. It would not include a residential component, except for time shares within hotels and an RV park.

The South PAD would be mostly residential, except for some commercial-designated land adjacent to Interstate 8. Within that area, a resort hotel and wildlife attraction area are planned, Gagliardi said.

The major feature would be a residential housing development within a master planned community environment offering unique common area open space amenities, support commercial services, a site reserved for an elementary-charter school and pedestrian access to the hiking trails within the adjacent Casa Grande Mountains.

Currently the property that would comprise the 1,500-acre Dreamport Villages development is all raw land.

For that reason, confidence in success of Dreamport Villages is tempered, at least for now. But the developers believe Casa Grande is an ideal location for a successful theme park.

"We believe we are at the same point today in Casa Grande as was Orlando 50 years ago when Walt Disney first envisioned Disney World," the developers wrote in the conclusion of their proposal. "The key difference is Orlando was not one hour away from two separate major metro areas along an interstate freeway."

The developers added that The Block Sports Co. can't accomplish the proposed Dreamland Villages complex by itself. They stressed the need for partners from other businesses and government leaders to lay the foundation for the work ahead.

The proposed Dreamland Villages development would be located in between the greater Phoenix and Tucson metro areas. The two fast-growing areas have a combined population in excess of 6.5 million people.

Tourism is a major industry in Arizona and planners of Dreamport Village expect to increase tourism both in Casa Grande and statewide.

The anticipated Dreamport Villages' marketing budget for the first year of operation would amount to about 75 percent of what Arizona spends in total on annual tourism marketing.

The economic impact of the project could be substantial. In sales tax revenue, Arizona would receive 5.6 percent of every dollar spent throughout the resort. Casa Grande would receive 2 percent and Pinal County, 1.1 percent.

In addition, the first phase of the project is expected to create about 5,800 direct and indirect jobs.

Dreamport Villages is projected to initially draw nearly eight million annual visitors, which is more than 25 times the population of all of Pinal County and more than 100 times the current population of Casa Grande.

At build out, Dreamport Villages would result in an estimated 15,000 direct and indirect jobs with the visitor count expected to surpass 30 million.

Although contractor selection is still a way off, the proposed Dreamport Villages has a well-represented project design team.

Walkability is an important factor in design of the development. The project will develop a network of walkways that can move pedestrians efficiently in a safe and comfortable environment that can add to the project experience.

Water taxis also would be used to get visitors around.

A canal system would be designed to allow transportation by water taxis through portions of the project. Along the canal would be a pedestrian and biking trail that will link the project's pedestrian network with the city of Casa Grande's Linear Park — Casa Grande Canal Segment.

The linear park would vary in width and be used for both retention and passive recreation. An on-site shuttle service also would provide visitors an option to move throughout the project.

The Block Sports Company is under contract to acquire all of the properties in Dreamport Villages. In the future, Block Sports also may acquire other nearby property for incorporation into the overall plan.