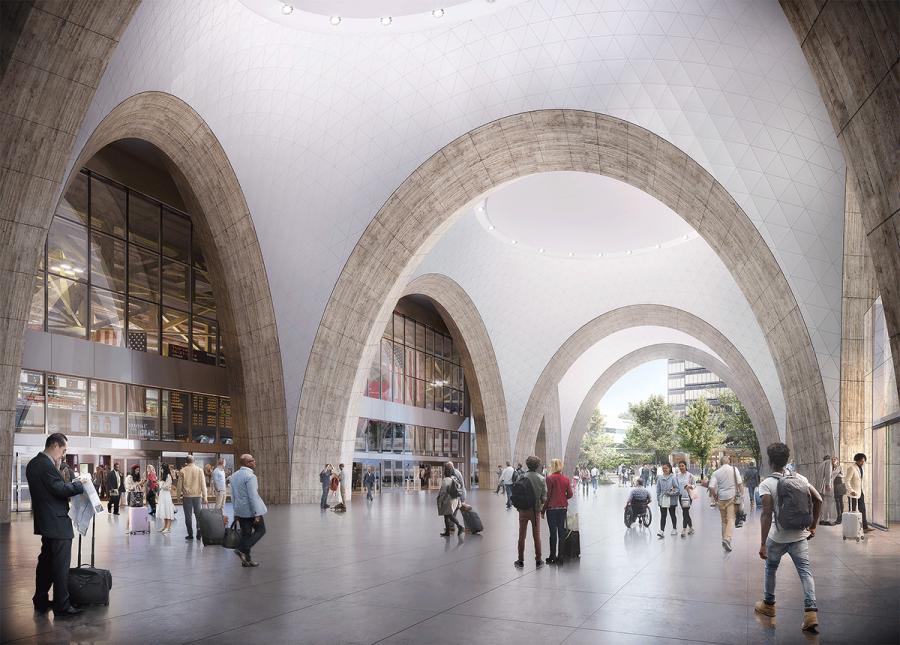 A rendering of the final expanded outdoor concourse area. (Rendering courtesy of Hines)

High above the train platforms at downtown Boston's South Station on Sept. 19, construction workers in hard hats and safety harnesses stood amid a dense network of steel support beams, aligning a hulking piece of steel like it was a puzzle piece.

Construction work on the 51-story, 678-ft. tower above New England's busiest train station, which began in January 2020, continued as civic leaders gathered at ground level to celebrate the project's progress.

Beyond the million-sq.-ft. office and condominium tower, another highly visible building for Boston's expanding skyline, the project's first phase includes a new bus terminal and an expanded outdoor concourse.

Officials with Hines, the Houston, Texas-based real estate development firm building the project, added that the bus terminal will expand capacity by more than 50 percent and "will provide more convenient connections to the train and subway."

The busy South Station is on the MBTA's Red and Silver lines and is the northern terminal of all the commuter rail lines south of the city. It also is a regional bus hub and is the starting spot for Amtrak and other trains headed to New York City and points beyond.

But a mixed-use real estate development at South Station has been in the works for decades, according to the Boston Globe. Almost three years ago, Hines closed on an air-rights agreement and financing, before starting construction work a month later — just before the COVID-19 pandemic hit Boston.

At the Sept. 19 event, Massachusetts Gov. Charlie Baker cheered the investment into South Station, adding that he looked forward to visiting the project "as a private citizen."

Baker also recalled the time he heard from his former transportation secretary that, after years of fits and starts, the project was moving forward.

"I do remember the day when Stephanie Pollack reached out to our office and said, basically, ‘OMG, Hines has a financing partner!'" he explained. "This thing had always been sort of banging around in the back of everybody's mind as something that might actually happen. But there was always, frankly, a lot of doubt about whether or not anybody would be willing to take the chance that was associated with building this."

David Perry, senior managing director at Hines, was seen smiling broadly at the South Station celebration. He noted that the level of coordination between private organizations and public agencies spanning the city, state and federal governments to build a tower above a busy transit hub was considerable.

"We always felt it over all these years, but to be here today, celebrating it together is really special," Perry told the Globe. "It's so gratifying, I can't even begin to tell you." 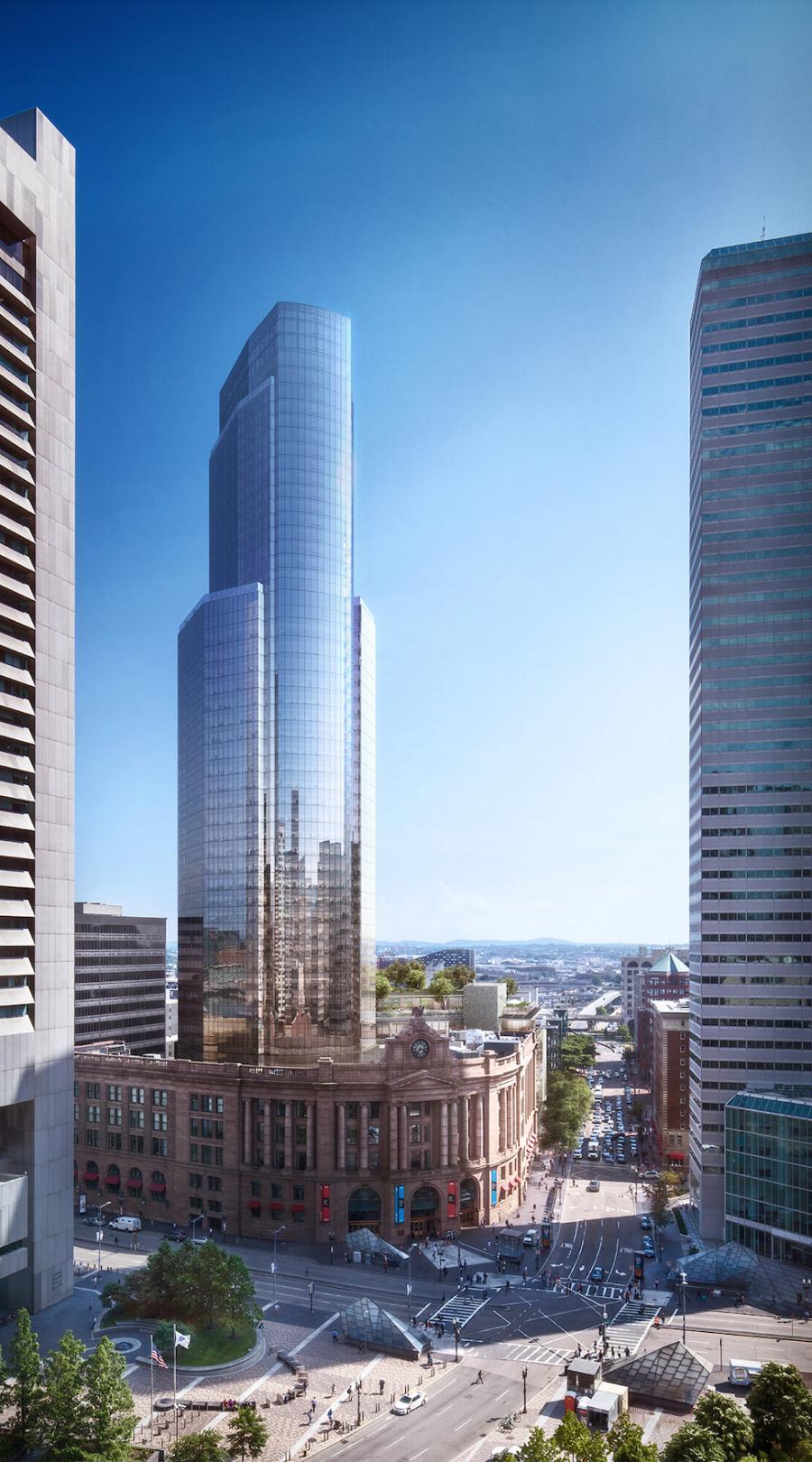 The South Station tower's $1.5 billion first phase will include 166 luxury condo units on its top floors, along with 670,000 sq. ft. of office space. Hines had initially planned a hotel for the project's second phase but may look to include life-science lab space or apartments instead, the Boston newspaper learned.

Perry told the Globe that the second phase would not start before work wraps on the office and condominium tower in 2025.

The Hines team recognized that there are headwinds facing today's office market, with demand for commercial space less of a sure bet than it was before the pandemic. No tenants have yet been signed for the tower, but, Perry said, South Station is "the best location in the city" and including high-end condos in the mix for the 51-story tower is a good economic bet.

"The future of demand for office space is less certain now than it was in 2019. I think that's indisputable," Perry said. "[But] we're very pleased that we decided [on] this 51-story building. We kind of hedged our bets between residential and office, and thankfully the residential market is holding up really well."

The celebration took place the day after the reopening of the Massachusetts Bay Transportation Bay (MBTA) Orange Line, which had not run for a month as the transit authority undertook five years' worth of safety improvements.

Boston Mayor Michelle Wu began her comments at the downtown event by thanking Pollack and the MBTA for "the hugely successful Orange line project done on time and with great results."

"Just to show how much this region and city are committed to advancing this vision of transportation that undergirds our economy, we're here the very next day to celebrate a huge step forward," she said. "The [South Station] transportation center really will embody what we want people to feel about our city when they first set foot here."