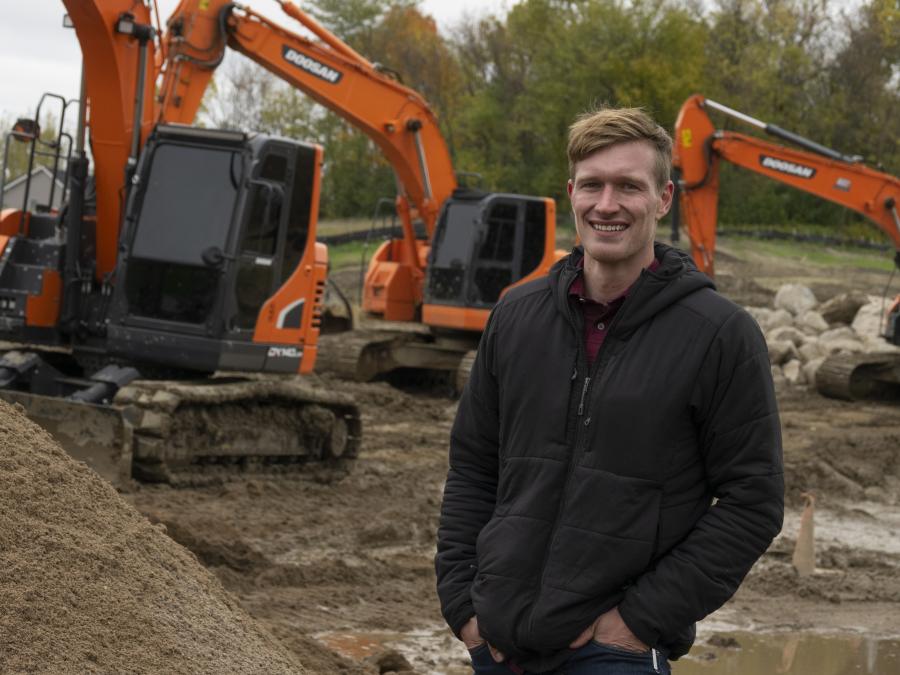 Matt Quinnell works for his parents’ company, Advanced Wall Structures of Minnesota. Though he initially studied to be an engineer, he found he is happier spending up to 12 hours a day in an excavator, building stone walls.

Matt Quinnell is just 29 years old, yet this heavy equipment operator has logged thousands of hours in excavators. The Minnesota native currently works in the family business to build artistic boulder retaining walls in the growing Minneapolis suburbs. For Quinnell, building the walls isn't work. It's a fun challenge.

Quinnell's parents started Advanced Wall Structures in 1992. His mom, Patti, is the president of the company and his dad, Terry, is the vice president. A brother, Chris Theis, works side by side with Matt as the duo uses Doosan excavators to excavate, compact, build and finish sculpting the land for new-home developers.

"We work for a lot of bigger, national home builders as well as local companies to help them develop sites," Quinnell said. "We're a preferred contractor. It took us a long time to get this reputation, and it's very important to us. Builders just call us, and we take care of what they need. We work on relationships more than anything, and it's worked out very well for us. We are backlogged six months with work, sometimes up to a year." 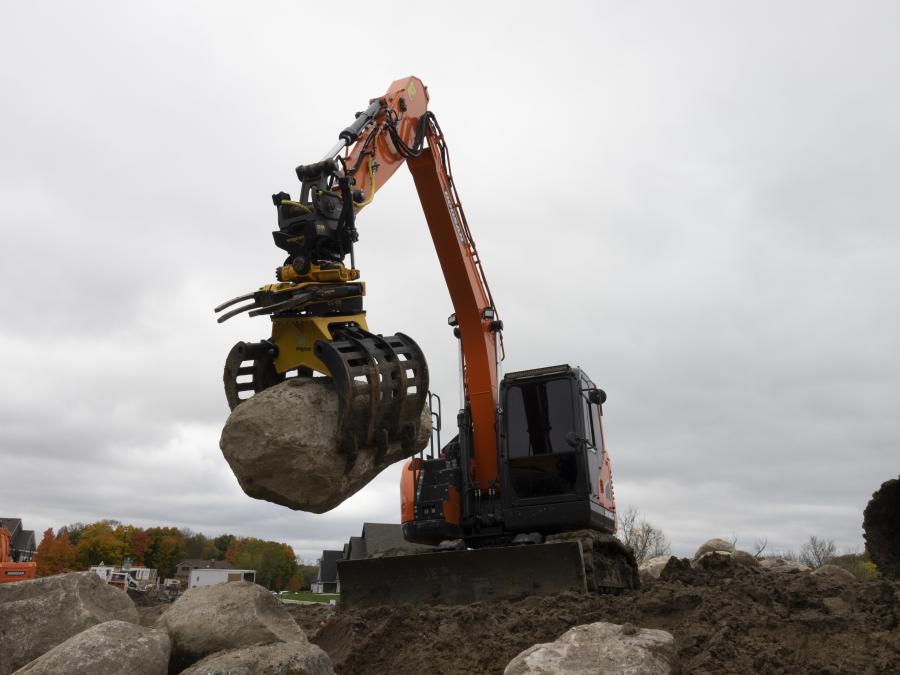 In the early '90s, Terry and Patti Quinnell started their company by building block retaining walls. A family neighbor invented a retaining wall unit, Matt Quinnell said, and it was one of the first block units. Terry traveled the United States building retaining walls with the blocks for nearly 12 years. Eventually, he settled back in the southern Minneapolis suburbs to grow Advanced Wall Structures as builders were buying up rural property and preparing new housing developments.

Much of the work building block retaining walls was done with compact equipment, specifically skid steer loaders and compact excavators. As the wall projects got bigger, the family purchased a larger crawler excavator that could lift heavier material.

In the Minneapolis area, developers' attention shifted away from traditional retaining block walls to something new — boulder walls made from natural stone in Minnesota. Advanced Wall Structures seized the opportunity in 2008 and shifted much of its focus to building the more natural looking walls in new housing communities.

Today, Quinnell said, approximately 90 percent of the company's retaining wall business is boulder walls and the remaining 10 percent is the traditional block walls.

"The boulder walls blend into housing developments," he said. "They're more natural." 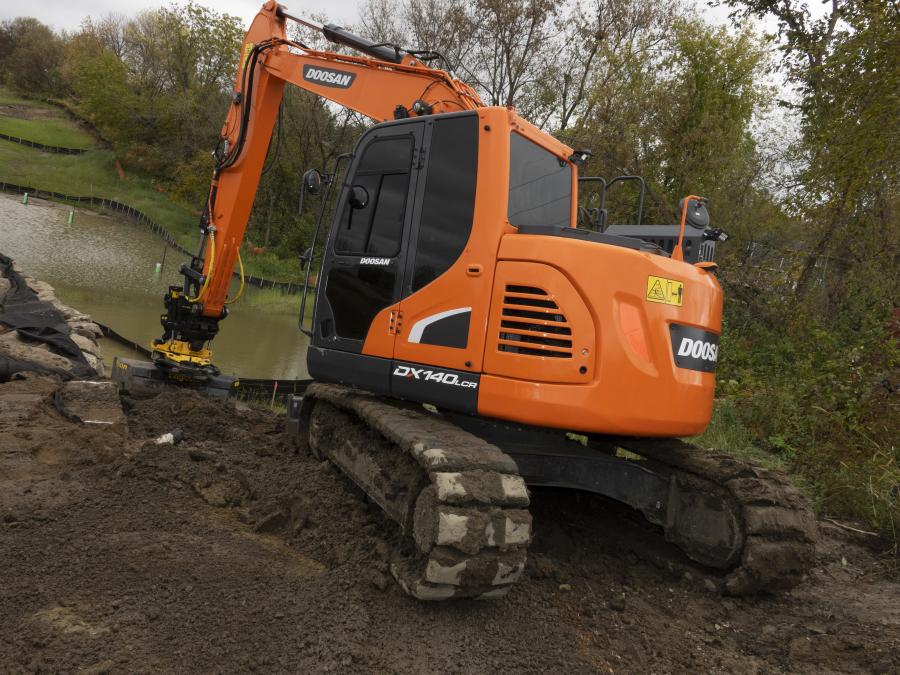 Time for a Switch

Building boulder walls requires larger equipment, particularly for lifting and placing tasks. After nearly four years with other crawler excavators, the family was introduced to a new brand — Doosan.

"My dad leaves the equipment decisions up to me," Quinnell said. "I did a demo with a Doosan DX180LC-3, which was a vast improvement over our other machine in terms of power and fuel consumption. We had never bought a new excavator, so it was a huge step for us, and we wanted the right machine."

That initial demonstration and subsequent Doosan excavator purchase has led to a solid partnership between Advanced Wall Structures and Lano Equipment. Since buying the DX180LC-3 in 2012, the company has bought four DX235LCR-5 excavators, one DX140LCR-5 excavator and a DX85R-3 excavator. 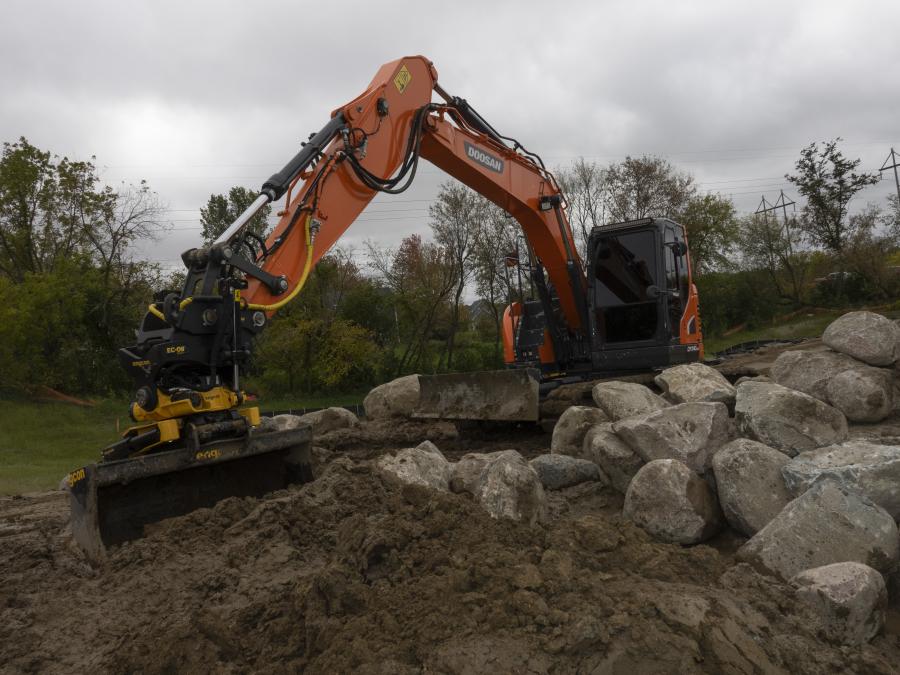 Matt Quinnell compares his company's excavators to Swiss army knives — machines that adapt to different tasks at a moment's notice.

"When we traded in our first machine, the DX180LC-3, I couldn't believe what we got for the machine," Quinnell said. "It held its value. I think the machine was at the dealership for a week, and it was gone. Someone scooped it up right away.

"We have a great relationship with Lano Equipment. They take really good care of us. Our salesman, Kurt Lano, treats us like family. When I walk into the dealership, I know everyone, and they know me."

As the company built its fleet of reduced-tail-swing crawler excavators, it brought work in house that it previously subbed out to another contractor. Quinnell and his operators use the nimble excavators regularly at busy residential developments.

"In the past, a lot of the excavation was done by other companies, and we came in and built the retaining walls," Quinnell said. "Now we get into a lot more excavation. We move a lot of dirt for the size of our company — on top of just building the block or boulder walls."

Quinnell estimates the company builds approximately 60,000 to 70,000 sq. ft. of boulder walls a year, at a variety of heights, using Doosan excavators to set the boulders in place. A critical part to the company's success is compaction. 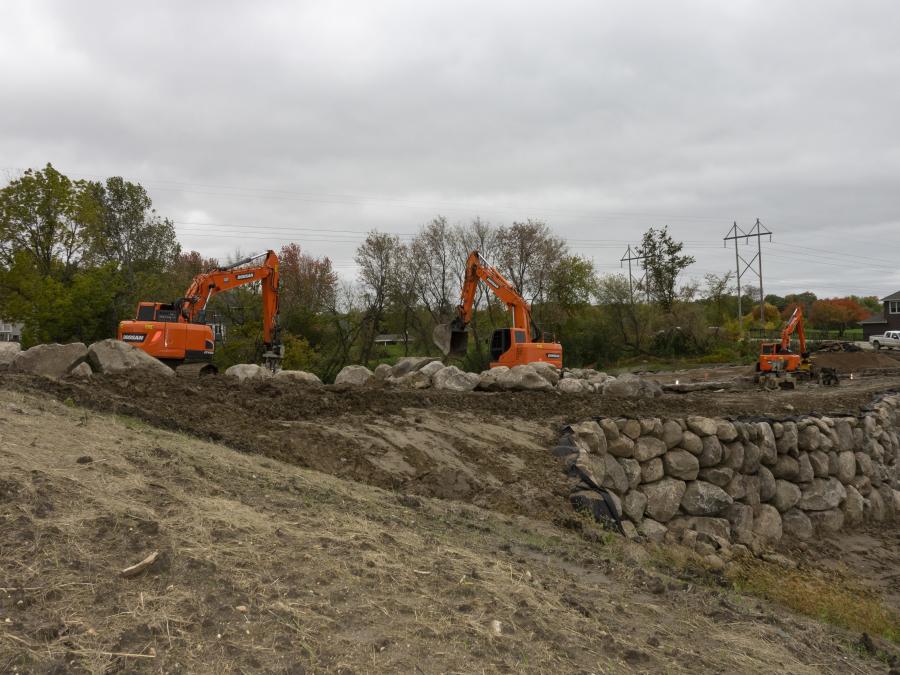 Operators use the excavators with plate compactors to ensure the ground is ready for the fabric that sits between the dirt and the boulders.

"The fabric makes it so the wall cannot wash out," Quinnell explained. "It's heavy-duty, 8.5-ounce filter fabric."

Once the fabric is in place, Quinnell pairs a Doosan excavator with a hydraulic rotating grapple to lift, rotate and place the boulders to build the walls.

Quinnell spends up to 12 hours a day in the excavators.

"I tell people that my sandbox just got bigger," he said. "I love it. I spent all my time when I was a child in my sandbox or watching my dad do stuff in his skid steer loaders. People always joke with me that I play Tetris all day long, but it's an extreme form of Tetris with 5-ton rocks."

"We own three DX235LCR-5 excavators, and they are my favorite machines," Quinnell said. "They've got so much power. I can't believe some of the things that they can do as far as moving weight and the force they have. We push our machines to their limits and beyond a lot of times." 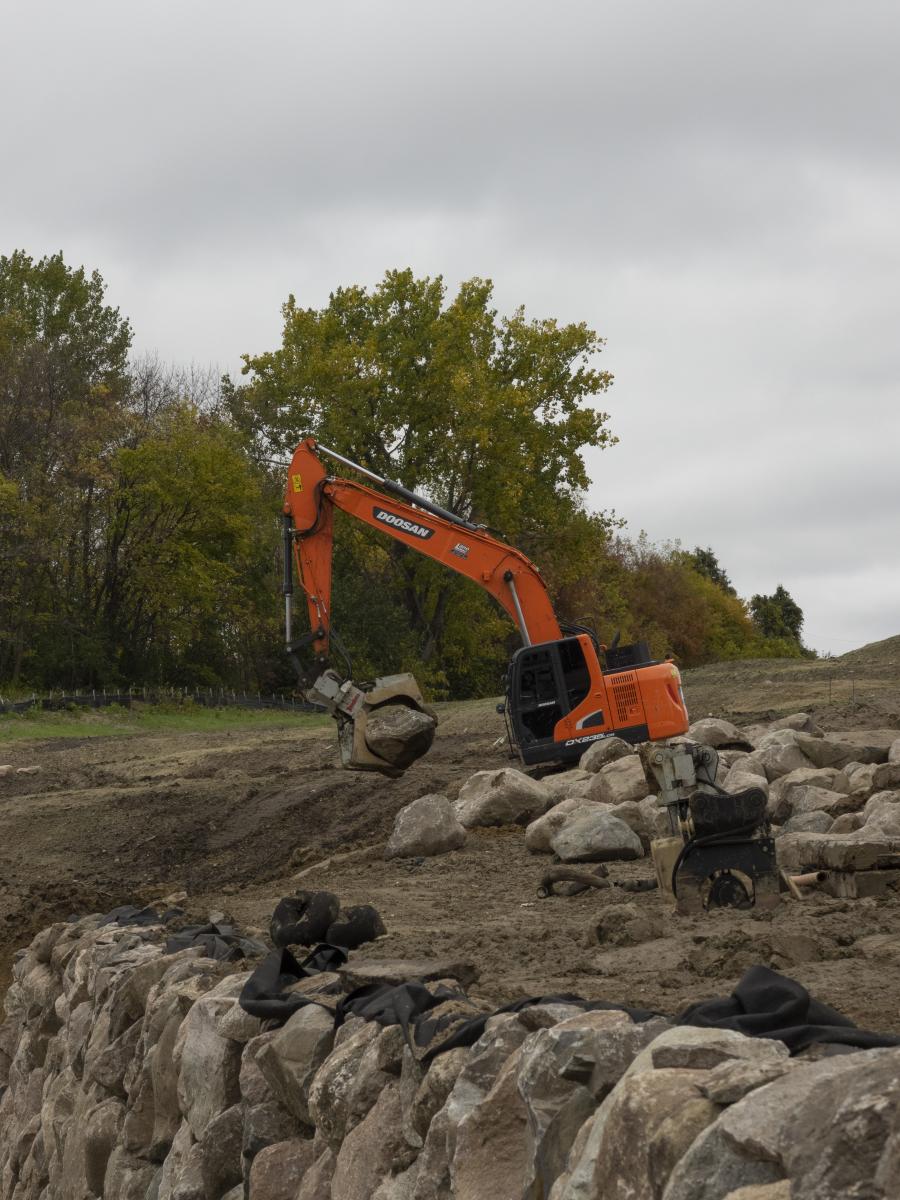 One of the company's newest Doosan machines, a DX140LCR-5, came equipped with optional rubber track pads and a dozer blade. Quinnell explained that, in some of housing developments, he needs to move an excavator over sidewalks and curbs. The rubber pads have been very useful when he needs to carefully maneuver the Doosan excavator without disrupting the finished concrete.

"We still build quite a few smaller retaining walls, which are four or five feet tall, so we can use the new DX140LCR-5 to build those. It's a time saver," he said. "We set the blade down, and we've got more stability than you can ask for. And the new machine has a rearview and sideview camera. I usually have my camera up on my screen so I can glance somewhere when I'm working in a tight area. I can check the straightness of the wall with just the camera so I don't have to get out anymore.

"We wanted to make the DX140LCR-5 like a Swiss army knife — a machine that could do a bunch of different tasks at a moment's notice."

With each new Doosan machine, Quinnell said he notices enhancements that make his job more comfortable and more productive. He said Doosan excavators give him better visibility to the grapple when he is placing boulders to build walls.

Quinnell has an eye condition called photophobia, which is an extreme sensitivity to light. As a result, he has tinted the windows in the company's excavators to minimize the strength of the sunlight and make his eyes more comfortable while operating. He said it cuts down on glare and his eye fatigue, yet it doesn't affect his visibility to the job site or his productivity. Another bonus of the tinted windows is a cooler machine, meaning he doesn't have to run the air conditioning as hard during summer.

In between building walls, Advanced Wall Structures performs demolition work for developers to remove an existing home on a property designated for development. The company will bring its Doosan machines and attachments to the site and make short work of the existing home.

"In Minnesota, housing footings go down 48 inches," Quinnell said. "I'll dig around just one side of it to expose it, and I'll grab a 10- or 12-foot section of footing, and the machine will rip it right out of the ground."

The Doosan excavators paired with grapples help Quinnell and his operators remove foundations and construction debris; sort metals and other recyclable material; and load waste into roll-off containers for disposal at a sanitary landfill.

Quinnell said other demolition companies sometimes leave part of the foundation, forcing the companies that do the mass excavation to bring in a machine to finish the job. Developers know what they're getting when they hire Advanced Wall Structures to remove the foundations.

Quinnell enrolled in college after high school and had his sights set on being a mechanical engineer. It didn't take long for him to realize he'd rather be in the cab of an excavator than sitting in a classroom.

"I enjoyed being in a machine and working on job sites, building things," he said. "I've been around construction my whole life. When I was younger, I helped my dad on weekends and during summer when I wasn't in school. I started like anyone else. I had a shovel in my hand when I was 15 years old. Any chance I had to get in a machine and try to learn, I took it and ran with it. It's all self-taught.

"I've learned from my mistakes and how to work smarter. I remember seeing someone building boulder walls when I was younger, and I said, ‘One day I want to do that.' There aren't many companies like ours."