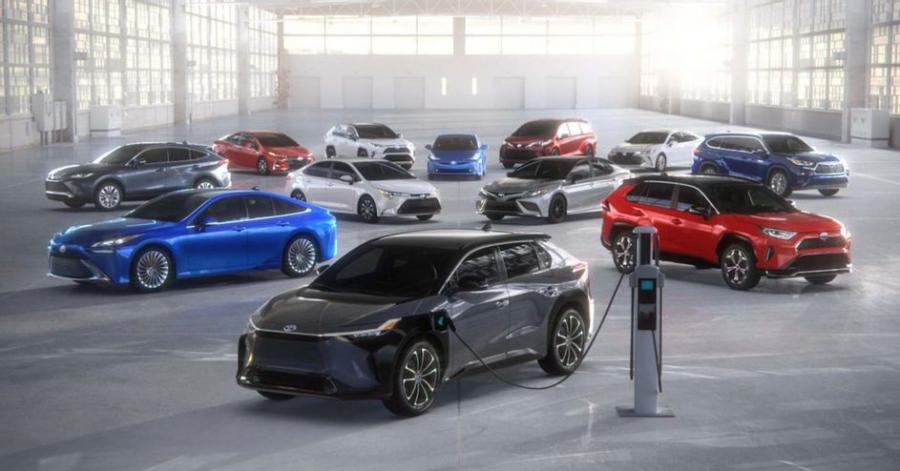 The company plans to produce enough traction batteries from the factory each year to power up to 1.2 million vehicles.

Toyota USA will invest $1.2 billion into a new automotive battery plant in central North Carolina — a project that amounts to the largest capital investment in state history.

The company plans to produce enough traction batteries from the factory each year to power up to 1.2 million vehicles.

The lithium battery manufacturing plant will be built at the 1,800-acre Greensboro-Randolph Megasite, in Randolph County near U.S. Highway 421, and become known as Toyota Battery Manufacturing, North Carolina (TBMNC).

"It's tremendous that Toyota has selected North Carolina for such an important part of its electric vehicle future, creating good-paying jobs and moving us toward a healthier environment," he said. "It's clear the world is beginning to embrace a clean energy future and today's decision puts North Carolina front and center."

Electric vehicles account for nearly 25 percent of Toyota's sales volume, according to HotCars, an online news service, and the company estimates that number will increase to 70 percent by 2030.

"The future of mobility is electrification, and the Greensboro-Randolph Megasite is the ideal location to make that future a reality," noted Ted Ogawa, CEO of Toyota Motor North America. "North Carolina offers the right conditions for this investment, including the infrastructure, high-quality education system, access to a diverse and skilled workforce and a welcoming environment for doing business."

Earlier in the fall, the automaker said it would invest approximately $3.4 billion in automotive batteries in the United States through 2030. Specifically, the investment is for developing and localizing automotive battery production, including those for battery electric vehicles, and is part of the global total of approximately $13.5 billion set aside for investment in battery development and production announced in November by Toyota.

North Caroliina will reimburse Toyota for up to $79.1 million over 20 years, and if the automaker invests the full $3.4 billion it could receive up to an estimated $315 million.

The new plant is slated to start production in 2025 and lead to the creation of 1,750 jobs, reported WTVD-TV in Durham. The factory will produce batteries for every hybrid and electric vehicle in Toyota's inventory.

TBMNC will have four production lines, each capable of delivering enough lithium-ion batteries for 200,000 vehicles — with the aim of expanding to at least six production lines for a combined total of up to 1.2 million vehicles per year, according to HotCars.

In addition, as the company continues its efforts to reduce the carbon footprint of its vehicles and operations by 2050, Toyota will be using 100 percent renewable energy at this new facility to produce the batteries.

Selection of North Carolina is Significant for Toyota

The North Carolina Department of Commerce coordinated the state's recruitment of Toyota's new battery plant, which involved an extensive network of state, regional and local organizations.

"The hard work of preparing any site for business development involves not just moving dirt and laying infrastructure but investing in education, workforce development and the collaborative networks that pull resources together. I'm proud of the people and organizations that have worked closely together over many years to make today's announcement possible."

The automaker's selection of North Carolina for its battery manufacturing plant is significant for several reasons, including its proximity to its vehicle manufacturing plants in places such as Missouri, Kentucky, Indiana, Alabama and Texas. The Tar Heel State also is home to several lithium mines in the near west, which given recent global supply chain issues, creates a direct line between the raw material and a manufacturing plant.

Toyota's project is estimated to grow North Carolina's economy by at least $9.5 billion over 20 years, state officials said, the period when the grant's first phase could be active.

Salaries for the new jobs at the battery plant will vary by position but will average $62,234, increasing the regional payroll by more than $100 million every year. Randolph County's overall average annual wage is currently $37,865.

"North Carolina consistently ranks as the nation's top state business climate," he said. "We have a balanced budget, have invested in a strong workforce and we've maintained a AAA credit rating. As [the state] continues to grow, Toyota's investment is a sign that we are doing the right things to attract people and businesses to our thriving state."

Piedmont Triad Partnership CEO Stan Kelly told WTVD that there were many "leaders behind this win," but gave special mention to former Greensboro Mayor Jim Melvin.

"I've said, 'A win for one is a win for all,' and today, thanks to the hard work, collaboration and persistence of leaders like Jim Melvin, our entire region and state wins," Kelly remarked. "Successful regions invest in themselves for long-range, transformational growth and this announcement is the result of hundreds of leaders and millions of dollars invested with confidence in the Carolina Core's manufacturing excellence."

He added that Toyota's announcement builds on the "significant momentum" of more than 20,000 new jobs added in the region since 2018.

The so-called Carolina Core is a more than 120-mi.-long stretch of central North Carolina from west of Winston-Salem running east-southeast to Fayetteville and is defined by state economic leaders as an area built by the assets that make the state's mid-section a globally competitive market. WTVD reported that it includes a talent pool of more than two million people, several prestigious colleges, universities and urban research parks, as well as four certified industrial megasites.