A total of five bridges are being replaced. The project also includes removal of four existing bridges. 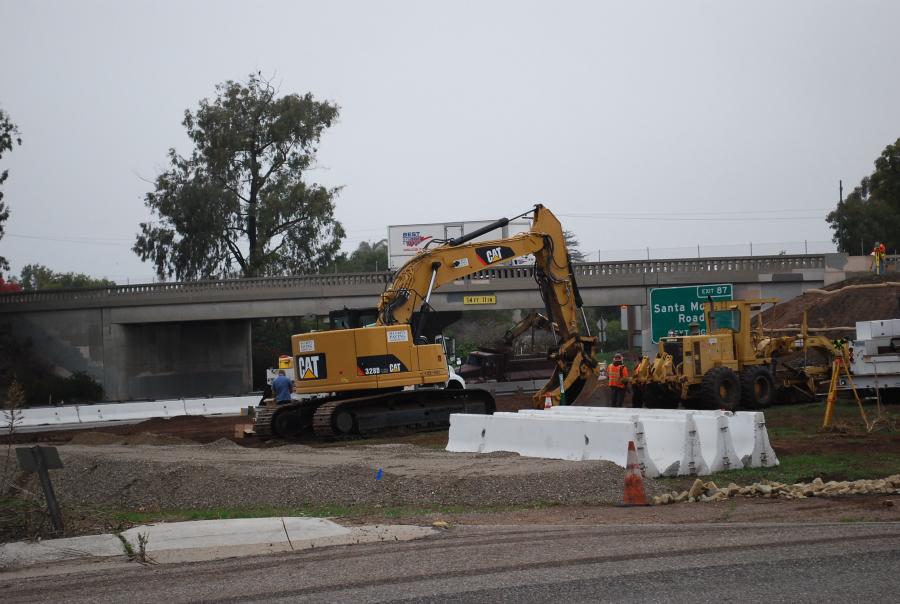 The project, located in Carpinteria near Santa Barbara, is a partnership between Caltrans, the Santa Barbara County Association of Governments and the city of Carpinteria. Funding is through state and federal tax revenue.

The city is working with Caltrans to develop and complete the Linden Avenue and Casitas Pass Road Interchanges Project.

Security Paving Co. of Sylmar, Calif. is the contractor.

A total of five bridges are being replaced. The project also includes removal of four existing bridges.

New bike lanes and sidewalk improvements will make it easier for residents to use local streets for in-town trips. A new bike way is being constructed along Carpinteria Creek to connect into a new bike path along Via Real.

The improvements are part of a bigger plan for Highway 101.

“The longer overcrossings, new bridges and safer on and off-ramp connections all prepare for the future addition of a carpool lane on Highway 101 while providing needed improvements for locals,” said Toby Ayars, owner of Ayars & Associates Inc. of Santa Barbara, Calif.

Highway 101 is being widened from two to three lanes as part of Phase 4, the next project, Ayars said.

The current $60 million project is the third phase of widening Highway 101 between Santa Barbara and Mussel Shoals. Eight of the 16 mi. in this area have already been widened to include three lanes in each direction.

The project is needed to address both traffic and safety concerns.

Highway 101 in the area has not seen improvements since the 1950s. Since then, traffic has increased considerably.

“Safety will be improved through new, longer on and off-ramps, new traffic signals and additional lanes,” Ayars said. “The local street connections will make it easier to get across town without having to use the freeway.”

New roads, bridges, ramps and bikeways will open periodically from 2018 through 2020.

Most of the initial work was performed by the prime contractor. Many of the subcontractors are now on site, Ayars said. But KRC Safety Co. Inc. of Goshen, Calif., was on site early for construction of signs and CGO Construction Co. Inc. of Ontario, Calif., has been clearing vegetation.

Heavy equipment on site includes excavators, a motor grader, a loader and a skip loader.

Only about 1,500 cu. yds. of fill material will be needed for the project.

Crews removed pavement along Highway 101 and asphalt was sealed to prepare for lane shifts as shoulder and median widening work continues. Vegetation has been cleared and freeway lanes restriped as crews move into shoulder widening and roadway improvements.

As the project progresses, highway interchanges at Linden Avenue and Casitas Pass Road will be updated with the new bridges and freeway ramps. Via Real will be connected across Carpinteria Creek through a new roundabout up to Linden Avenue.

Crews conducted pile tests for the new freeway overcrossing supports. Large equipment was in the area for about a month.

Initial Casitas Pass Road work to prepare the road and the southbound Highway 101 onramp for the widening of the overcrossing, occurred in early 2017.

The highway interchanges at Linden Avenue and Casitas Pass Road will be updated with modern new bridges and freeway ramps and the new roundabout. The new bridges also will help traffic flow smoother. Congestion will be minimized and the highway, ramps and connecting streets.

Nighttime closures will be conducted as needed.

Highway 101 will have nighttime closures to allow for safety barrier placement and to prepare for bridge construction and demolition. Linden Avenue will be closed over Hwy 101 for approximately three weeks in 2018.

New roads, bridges, ramps and bikeways will open periodically from 2018 through 2020.

The City of Carpinteria Will Own Facilities

Facilities to be owned by the city include: Via Real extension from the Carpinteria Creek area to Casitas Pass Road, Via Real extension from Vallecito Road to the Ogan Road-Via Real-U.S. 101 northbound onramp roundabout, two traffic signals (three new Traffic Signals will be owned by Caltrans), Via Real Bridge over Carpinteria Creek, the northbound onramp roundabout, storm drains, street lighting, landscaping, vegetated bio-swales and street trees.