Cheering First Day of Summer? Crews in the Southwest Aren't

The forecast called for a high of 120 degrees in Phoenix, which it hasn't seen in more than two decades. 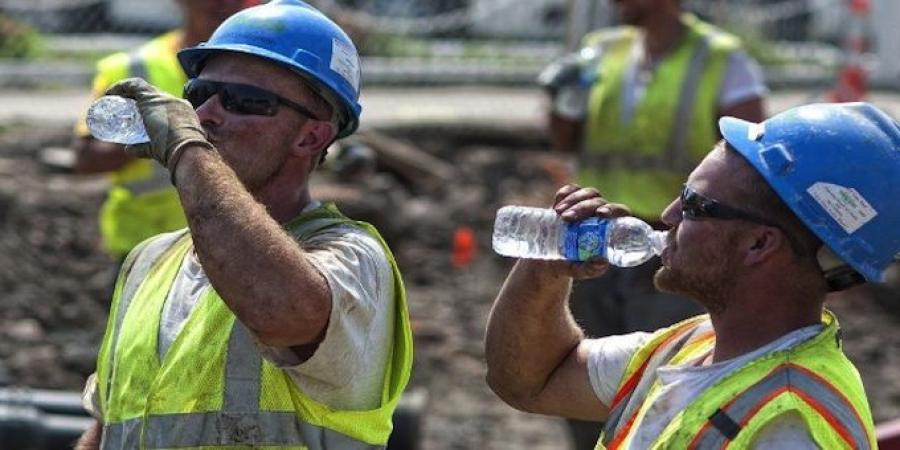 Workers in hard hats and vests labored in the heat and try to stay hydrated. (eSUB Construction Software photo)

PHOENIX (AP) — The first day of summer brought some of the worst heat the Southwest U.S. has seen in years, forcing flights to be canceled, straining the power grid and making life miserable for workers toiling in temperatures that reached 120 degrees or higher in some desert cities.

Arizona, Nevada and California saw dramatic temperatures Tuesday as researchers say deadly heat waves like this one were going to grow more frequent.

Meteorologists in Phoenix said Tuesday evening the temperature topped out at 119 degrees_one that has only been matched or surpassed four other times.

The forecast called for a high of 120 degrees (49 degrees Celsius) in Phoenix, which it hasn't seen in more than two decades. Death Valley, California, reached 125 and Palm Springs hit 121, still a degree lower than the same day last year.

The operator of California's power grid called on people to conserve electricity during peak hours.

Workers at a construction site in a Phoenix suburb huddled under an excavator to find a sliver of a shade during a break. At another building site, men in hard hats and yellow vests labored and sweated in the heat, downing water to stay hydrated. Project superintendent Tommy Russell says his company has held weekly safety meetings to prepare for the heat, and he will send his workers home if it hits 120.

Las Vegas also baked. Visitors tried to stay inside air-conditioned casinos, and some tourists lugged packs of bottled water around the Strip. Others went to a bar where the temperature is set at 23 degrees and glasses, walls and seats are sculpted from ice.

Tonya and Lavonda Williams traveled to Sin City from Orlando, Florida, to see the Backstreet Boys in concert. Walking on the Strip in 112 degrees was too much to handle, even for people accustomed to heat.

"This is like the oven door is open," Lavonda Williams said as the sisters walked from a pedestrian bridge into The Palazzo casino-resort.

"It's too hot to even drink alcohol," Tonya Williams added.

Landscaper Juan Guadalupe scaled a spindly palm tree more than 50 feet tall in Phoenix, using a chain saw to hack the branches. He didn't mind being tethered to a tall tree because he occasionally catches a cool breeze.

"Down here, it's hot," Guadalupe said.

With cooling and hydration stations in full swing across the region, hundreds flocked to Grace Lutheran Church in Phoenix for water and refuge.

"We have homeless people come from a long way to sit here," longtime volunteer Moses Elder said. "There are other spots where you can go get cold water and sit down and cool off, but there are few places you can lay down and get something to eat."

In Palm Springs, Jim Brooks only had to walk 50 yards from his car to a burger restaurant but felt like he nearly melted in the process.

"I almost didn't think lunch would be worth it," the 30-year-old told the Desert Sun newspaper. "I was sort of hitting myself for leaving home. I have air conditioning there."

The weather comes as new research found that nearly one in three people now experience 20 days a year when the heat reaches deadly levels. The study of nearly 2,000 deadly heat waves worldwide since 1980 was published Monday in the journal Nature Climate Change.

In the Southwest U.S., the heat has caused several problems this week.

In addition to grounding more than 40 flights of smaller planes, airlines have been taking other measures on larger jets to reduce their weight. American Airlines spokesman Ross Feinstein said the carrier began limiting sales on some flights to prevent the planes from exceeding maximum weight for safe takeoff in the hot conditions.

The main burn center in Phoenix warned people to be careful around car interiors and pavement and with their pets.

About 50 people went a PetSmart store in a Phoenix suburb Tuesday to receive free elastic booties to put on their pets' paws so they don't burn on concrete and pavement.

Shelby Barnes, 48, picked up three sets of the booties for her dogs. She said she yells at people who walk their dogs without them in the afternoon heat.

"If you can't put your foot on the sidewalk, neither can they," she said.