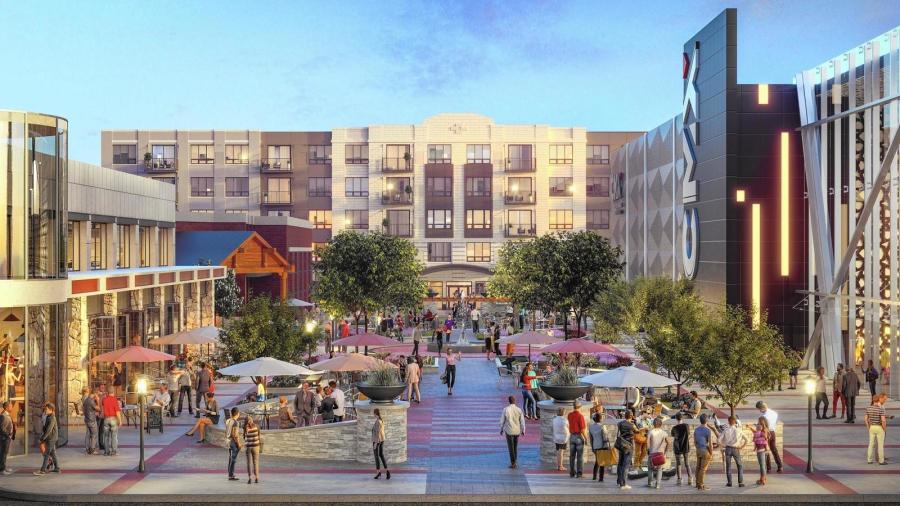 The Wheeling town center’s 100,000-square-foot retail area, seen in this rendering, will be anchored by a 10-screen CMX movie theater with reclining seats and dining and cocktail options. City Works Eatery and Pour House will be located across from the theater, and other restaurants and shops will be a short walk from the apartments. (The Lynmark Group)

This northern Chicago suburb has long lured diners to its popular 3-mile-long Restaurant Row along Milwaukee Avenue. But despite its gastronomic prominence, the village of Wheeling has no real downtown, even though it was founded in 1894.

That is about to change.

After years of planning and overcoming obstacles, the construction of a downtown is finally underway in the village 30 miles northwest of Chicago.

What does a new downtown cost? The tab here is $110 million.

A town center will rise on a 16.2-acre vacant site created by the demolition of the bankrupt Wickes Furniture property on Dundee Road at Northgate Parkway. The site is surrounded by existing structures that set the stage for a downtown area, such as the village hall, police and fire stations, park district recreational building, aquatic center, ball fields, a lake and a commuter rail station on Metra's North Central Service line.

Presently, crews are laying foundations for the town center. Here's what to expect at the opening, slated for late 2018: A five-story, 300-unit apartment building will wrap around a 25,000-square-foot plaza with a pool, putting green, bocce court, fire pit, barbecue grills and a gazebo. The courtyard will serve as a central gathering place for residents and the surrounding community.

Nearby, the center's 100,000-square-foot retail area will be anchored by a 10-screen CMX movie theater with reclining seats and dining and cocktail options. City Works Eatery and Pour House — of the Chicago-based Bottleneck Management restaurant group — will be across from the theater, and other restaurants and shops will be a short walk from the apartments.

The town center is expected to provide a considerable boost to Wheeling's population, which now stands at more than 38,000.

"The town center will revitalize the community and become a destination for the area," said Patrick Horcher, Wheeling village president. He said it is the most upscale development in town.

"It has been a long time in coming," he said, alluding to the project's ups and downs. "After the village bought the Wickes property in 2008, it was a challenge to find a developer to do the town center. The site stood vacant for a while and was costing the village in lost property tax revenue."

The long planning process required the village to reach agreements with many stakeholders in the complex public and private project. These included the U.S Postal Service, a fuel pipeline company, Metra, the Wheeling park district and an existing Burger King near the entrance to the town center that was concerned about access and signage, according to John Melaniphy III, Wheeling's director of economic development.

Once the project was designed, some residents were concerned about whether the space would attract enough tenants, both residential and commercial. But after the groundbreaking in late July, Horcher concluded: "We're now on target for the town center we wanted years ago."

"I can't wait for the opening. It will be a huge new focal point in the village," said Neal Katz, a 30-year resident of Wheeling. He believes that " People will be moving back."

"The town center will enhance property values and be a catalyst for future development," Melaniphy said. "It will change Wheeling's image, which has previously been known as blue collar because of our industry."

"The town center will keep more shopping dollars here and will add a more cosmopolitan character to the village," commented Neena Pottoore, executive director of the Wheeling/Prospect Heights Chamber of Commerce.

That citylike feel is expected to woo renters — Melaniphy said most of the apartments will be one- and two-bedrooms targeted at young professionals and empty nesters. Residents will have 500 parking spaces, while 800 slots will be dedicated to retail and dine-in movie theater consumers.

Along with shopping and cinema, a smattering of other entertainment options are in the works.

New town centers are riding a national trend, according to Ed McMahon, an authority on sustainable development at the Urban Land Institute in Washington, D.C.

"Downtowns are the heart and soul of any community, and the future belongs to town centers. New suburban town centers are replacing failed regional malls in many parts of the country," he said.

"Wheeling's new town center will create a new place for housing, shopping, playing, eating and hanging out. The demand today is for town centers that are gathering places that attract young people as well as retirees."

"We're finally going to get a downtown. It will definitely be a big plus," said Gary Aver, broker and owner of Re/Max United in Wheeling. "It will make house values more stable and could increase them in the long run."

According to Tracy Cross, president of Schaumburg real estate consulting and market research firm Tracy Cross & Associates, the town center "should do well despite its relatively small size compared to other town center projects, such as the Glen in Glenview." The 1,121-acre Glen, built on the site of the former Glenview Naval Air Station, opened in 2003.

Cross said the Wheeling town center may create a real estate ripple effect if renters at the new apartment building later decide to buy a house in the suburb. He added that one impact of the town center could be to establish a premium in housing values.

Construction projects this large sometimes generate complaints from nearby residents. However, that is not a factor here because the town center is not in a residential neighborhood. It is bounded on the west by railroad tracks, on the east by village buildings, on the south by an 85-acre park and on the north by vacant land.

The town center was designed by the Chicago office of CallisonRTKL and will be built by William A. Randolph of Gurnee.