Current Chairman and CEO Pete Vigue steps down from the Chief Executive Officer position after serving in that capacity with distinction since 2000. He was named Chairman of the Board in 2008. 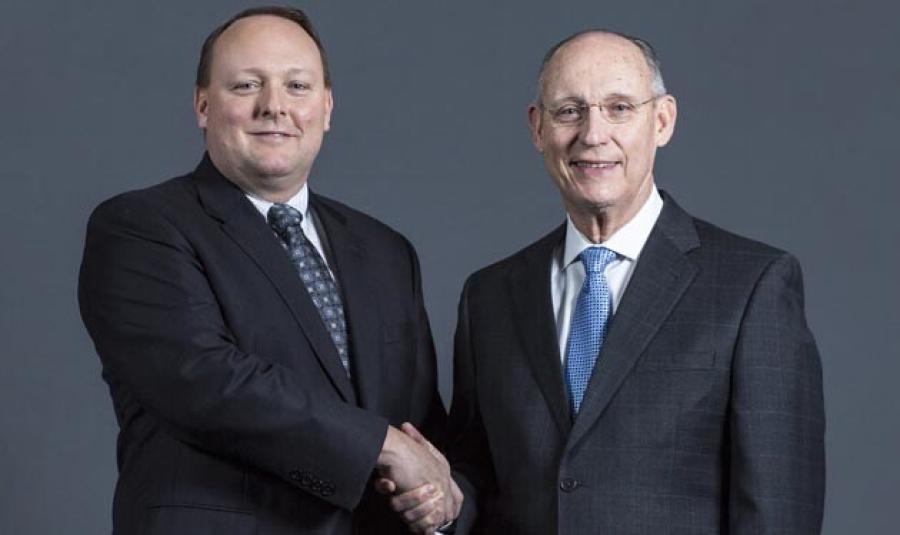 “We have been blessed with Pete's great leadership for many years and we are fortunate that the apple did not fall far from the tree with Andi,” said Cianbro Lead Director Eli Karter. “We knew we had our work cut out for us trying to find someone who could be the successor to Pete. As we got to know Andi and watched him perform in his role, we quickly came to realize that Andi is a very competent young man.”

Current Chairman and CEO Pete Vigue steps down from the Chief Executive Officer position after serving in that capacity with distinction since 2000. He was named Chairman of the Board in 2008.

“Cianbro is in a very strong position,” said Pete. “Now it is time for me to step to the side and let the next generation of leaders take this company forward. Andi thrives in this highly dynamic environment. He has great vision, embraces technology, and is constantly educating himself on the changing environment around us. He has demonstrated the ability to identify quickly what needs to change and has a unique ability to translate his vision into action. Andi understands this industry and knows every aspect of Cianbro. His willingness to expand our geography and pursue new ventures with the speed required to capitalize on opportunities has already proven successful. He is a champion of wellness and safety and believes in creating workforce development opportunities for our team members. I am confident that Cianbro will achieve many great accomplishments in the future under Andi's leadership.”

Andi joined Cianbro in 1990 as a summer construction worker upon graduation from Maine Central Institute in Pittsfield, Maine. He entered the Civil Engineering Program at the University of Maine and completed his Bachelor's Degree in 1993. Early in his career, Andi realized that it was important to continue his education. He entered the Business Program at Orono and completed his Master's Degree in Business Administration in 1997 while honing his construction skills in the field on projects with ever-increasing complexity and responsibility. He distinguished himself during daily operations at the Bowater mill in East Millinocket. He then served as project engineer on several important construction jobs within Cianbro's Mid-Atlantic Region, including the Case Memorial Bridge which carries eight lanes of traffic over the Potomac River in the heart of the nation's capital. By 1998, Andi was overseeing corporate-wide operations within Cianbro's Fabrication and Coating facilities. In 2003, he was named the company's senior vice president of operations, and was given the responsibility of overall management within all of Cianbro's geographical regions, from Maine to Maryland. Andi became President and CEO of Cianbro Corporation in 2008, upon the ascendance of Pete Vigue from president of Cianbro Corporation to CEO of The Cianbro Companies.

Pete Vigue has devoted most of his life to Cianbro. Since joining the company 48 years ago, Pete and the team have transformed the company into one of the nation's largest, most diverse, successful, 100-percent employee-owned (30th largest in the United States), open shop, construction and construction services companies. Cianbro is currently operating in five markets across more than 40 states and employs over 4,000 team members. The organization manages and self-performs work in five markets: Building; Oil, Gas & Chemical; Infrastructure; Power & Energy; and Industrial & Manufacturing.

Pete takes great pride in the Cianbro team which safely and efficiently plans, manages, and constructs many technically complex, historical and environmentally sensitive projects for a wide variety of public and private clients. His total commitment to safety is backed up by Cianbro's team members. Pete's enthusiastic and innovative spirit is also matched by the company's men and women, which has enabled Cianbro to build a durable reputation for completing projects safely, on schedule and within budget. The firm was ranked #103 on the list of the Top 400 Contractors in America in 2017, tabulated by Engineering News-Record (ENR) based on contracting revenue.

During Pete Vigue's tenure as a company leader, Cianbro and its team members have been nationally recognized as the Contractor of the Year by the Associated Builders and Contractors of America, and the Healthiest and Safest Company in America in 2004 by the American College of Occupational and Environmental Medicine. Cianbro has also received awards for Excellence in Construction, Outstanding Civil Engineering Achievement, and Engineering Excellence. Pete gives full credit for these accomplishments to the men and women of Cianbro. When asked about the organization's most meaningful achievements under his leadership, he points to two milestones, the first being Cianbro's title as America's Healthiest and Safest Company. The second milestone is the act of finalizing the firm's purchase of stock from the Cianchette brothers in 2003 thereby completing Cianbro's transition to 100-percent employee ownership. With one of his most oft-heard phrases, Pete Vigue sums up the spirit that has enabled these accomplishments: “It's all about people.”