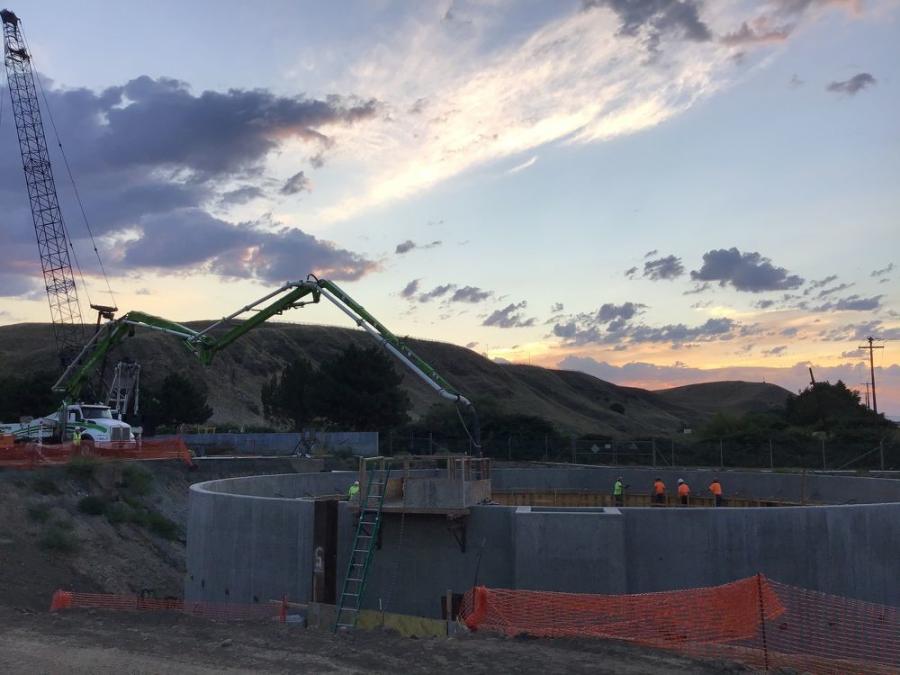 When the city of Lewiston, Idaho, decided to rehabilitate its wastewater treatment plant for energy and cost efficiency, Spokane, Wash.-based Clearwater Construction and Management LLC undertook what would be its, and the city's, largest such project to date.

Originally built in 1958, with a few smaller remodels along the way, this is the first major upgrade to this plant since the 1980s. Reports in the last few years included mounting concerns regarding its aging infrastructure, failing systems and at-risk machinery. Clearwater has its work cut out on the two-year, $34 million project consisting of construction improvements to the plant, covering everything from the north shore pump station, primary and secondary clarifiers, sludge pumping and holding tanks, aeration basins and blowers to RAS/WAS pump station and an ultraviolet disinfection system. 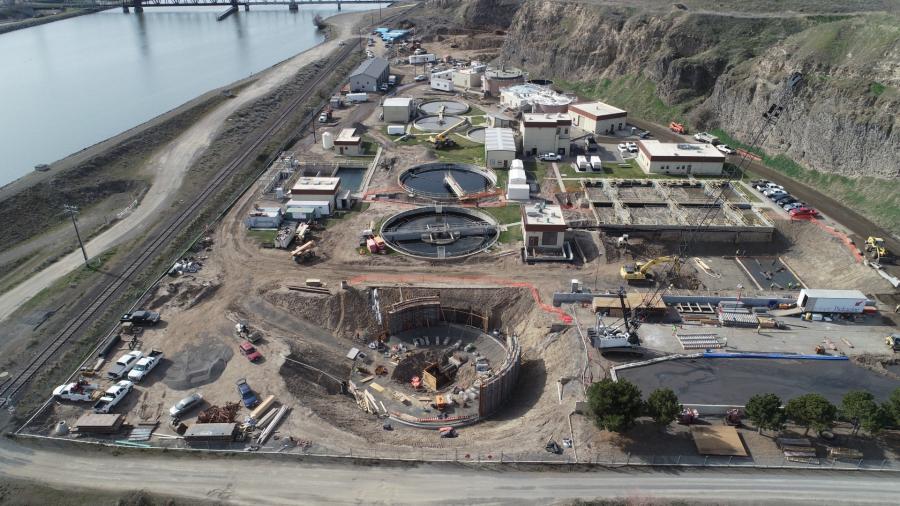 "We touched virtually every piece of the plant at some time during this job, all the way from the headworks to the effluent pump station and everything in between," said Paul Clary, president of Clearwater Construction & Management LLC, which performs both prime and subcontractor work, with a concentration in the heavy civil arena. "And we have to do it all while the plant is live, running about 5.6 million gallons a day on average."

Although the nature of the project isn't new to Clearwater — the company has specialized in water and wastewater treatment facilities, reservoirs and bridges since 2006 — it did present unique challenges for the team to address as the project was fully designed by the time they got involved.

"Early in the project, one of our biggest challenges was a congested area of the plant between the new aeration basin that we were building and an existing blower building," said Clary. "We had to put pipes in that were about 25 feet deep in the ground. We had to surgically excavate that area to get pipes in there and to compound that, when we got to the site, there was an electrical duct bank running through that area, which was the main power feed for the plant." Clearwater relocated it out of that area, which wasn't part of the initial designs planned, but warranted as there was no other way to build. 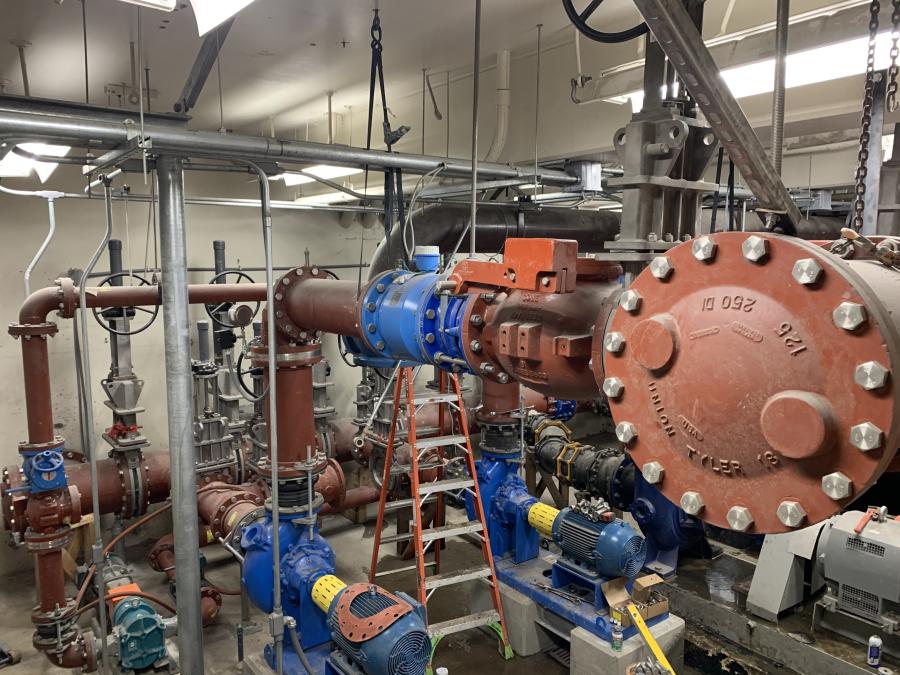 Specific wastewater equipment and pieces were sourced for this project, such as specialized iris valves, and a lot of structural and stainless steel was incorporated.

"When you are doing a federal-aided project such as this one, we have American Iron and Steel [AIS] requirements, so any of the metal, structural steel, bolts, pipe supports has to be forged in America, which definitely adds another layer of complexity," said Clearwater Project Manager Korie Palmer.

Equipment used in the construction process thus far has included a Link-Belt 460 to help with large-scale project excavation, in addition to Komatsu 200, 290, 300 and minis onsite. Two cranes running on the job, a Link-Belt 110-ton crawler and a 60-ton grove, plus a third crane for some of the required shoring on the project due to access and availability of hook time. Additional equipment consisted of dump trucks, several forklifts, scissor lifts, man lifts, and loaders onsite include Komatsu 380 and 320. The project included 34,000 cu. yds. of earth excavation with export of about 17,700 cu yds. and approximately 3,900 cu. yds. concrete in place.

Additionally, the room where the RAS-WAS pumps (return activated sludge and waste activated sludge) are located was in the basement. Access is a challenge to this area, which is full of equipment that has to be replaced or put in brand new. Palmer shared that it took some of Clearwater's most experienced crew collaborating with the city to ensure this was done in phases over time without impacting the plant's functioning, or the city and its residents.

The project is a little more than halfway through to completion. There was a six-week bidding period around September last year, with Clary and team receiving the contract as the lowest bidder. Work began right away in November. Now, more than a year later, with a team of about 30-odd staff, they are very close to completing right on schedule in 2021. This is commendable considering COVID-19 challenges and the nature and size of the work involved. They've had to shut down the job site twice — either because an employee had tested for or thought they might have COVID-19. 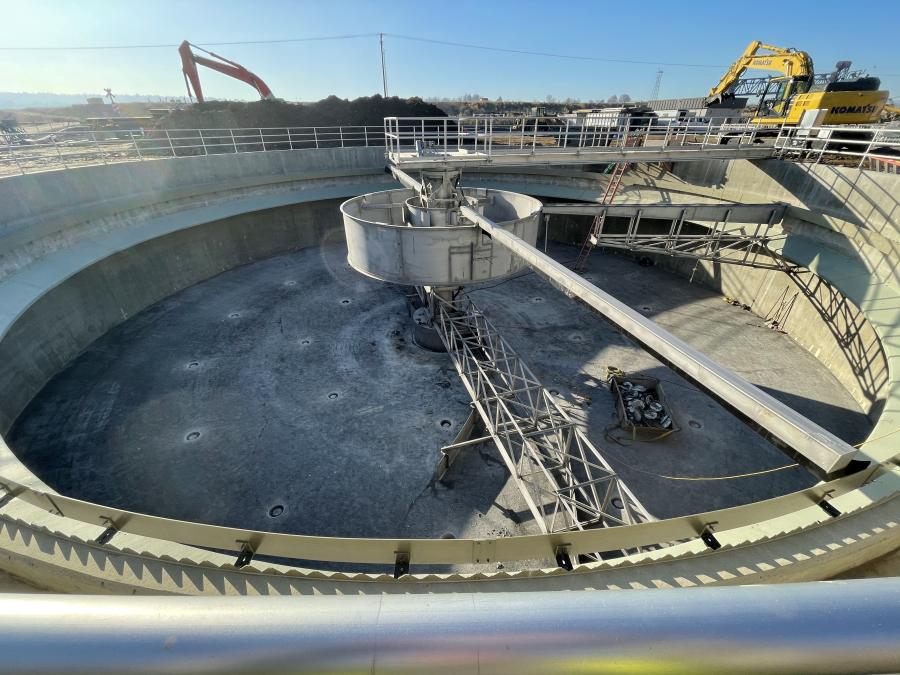 Palmer added, "It's also affected the supply chain. Manufacturing plants are running half-staff, truck drivers have been challenging to procure to bring in equipment and there have been delays in getting some of the supplies for building and equipment." The majority of the permanent equipment in the buildings was sourced from Europe so different protocols in every country and shipping issues caused by the pandemic caused some concern.

Meanwhile, there are a few more challenging scenarios for Clearwater to look forward to as work continues on. Of particular significance to Clary and Palmer are secondary clarifier 1 and the north shore pumping station, actionables which had to be revisited multiple times to finalize next best steps. Secondary clarifier 1 will be torn down in its entirety to build a new one given its proximity to buildings in the vicinity and without impacting all the electrical buildings nearby. The north shore pump station is located on the deepest spot in the entire site and will require shoring and dewatering, and then installation of a new pump station — this step of the process only made further taxing by overhead power lines running right across and the railroad on one side providing minimal access.

Once completed, the plant will be providing additional capacity to the community to allow it to grow over the next decade or two. It also cleans up the effluent flowing into nearby Clearwater River more effectively. Per an Idaho Department of Environmental Quality report, installing a more energy-efficient UV disinfection system with low-pressure high-intensity lamps will result in an estimated 66 percent annual energy savings, and with energy-efficient aeration system upgrades, such as premium blowers and fine bubble diffusion, the city will reduce the required air demand of the aeration system by about 30 percent. Installation of on-site systems control to minimize power costs and optimize treatment effectiveness will result in an estimated savings of $60,000 and 2,000-odd hours of operator time annually. CEG