Work Abounds for Company Named After a Pet Dog 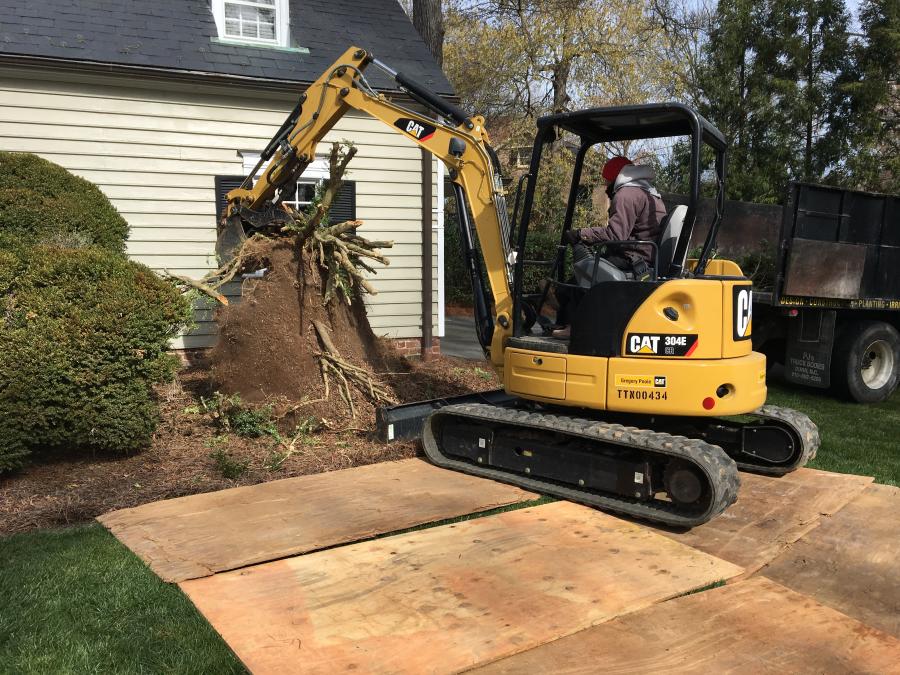 Fox’s latest project is a landscape renovation for a single homeowner; a typical piece of work on the residential side of the business.

“When I was a student at NC state studying for a degree in Landscape Horticulture and Design, I was asked to come up with a hypothetical company name to sign on class projects,” said Fox. “One night while working on a project, I looked down and saw my pet bulldog, Clero, looking back up at me. From that moment on, the name stuck and Clero Landscaping Inc. was officially born in 1980.

From a young age, Fox had been interested in landscaping.

“Well, I had an agricultural background, which came from working on my uncle's dairy farm and then I remember seeing a film in high school of a guy planting shrubs in horticulture class and it looked like a neat way to work outdoors, a bit like urban farming.”

Today, the company has a workforce of 12 people, who are working on three projects a day on average. The company divides its time working on various types of projects, including maintenance work, irrigation projects, hardscaping, landscaping, installation and lighting.

Fox's latest project is a landscape renovation for a single homeowner; a typical piece of work on the residential side of the business.

“For this project, we're taking out the plant material, putting in a new hardscape or landscape, renovating the irrigation, the lighting, the planting and lawn areas and putting the new package together,” Fox said.

Other notable projects on the residential side include guesthouse work at venues around Lake Gaston and Lake of the Woods in Virginia. Fox also does work with developers, having most recently collaborated in 2016 on some medical office buildings.

Past standout projects on the commercial side include the construction of an amphitheater in Granville Athletic Park (GAP) and landscaping work at Oxford Park and Oxford Industrial Park.

The GAP job in 2011 involved the Clero team doing the single acreage site work with another contractor building the amphitheater itself.

“It was a tiered amphitheater and we did both the grading for it and the drainage, which involved putting a lot of catch basins in front of it,” Fox said. “The grading part involved having to move about 1,000 cubic yards of dirt.”

“There was a residence that had a lot of drainage issues, so we had to install some 24-inch catch basins, pre-made with 12-inch pipes to catch water from the house and the lawn areas — it was a pretty extensive drainage job,” he said. “That was the job that really showed us the value of our Caterpillar 304E mini-excavator, which moved us from renting one to purchasing one.”

Another recent successful project for Clero was an unusual one.

“We were asked to build two columbariums [a building with niches for funeral urns to be stored] for a local Methodist church, which was pretty challenging,” Fox said. “Initially, we met with the church committee where my landscape architect sketched out a preliminary plan that they liked. We then further refined it to come within budget and built them from the ground up. We used pre-fabbed boxes for the columbariums themselves and then did the surrounding work, which included drainage, walls, irrigation, concrete and brick work and wrought iron fencing. The columbariums are about 7.5 feet tall each and the total site area was 30 by 20 feet.”

The work involved “some light grading with skid steers, digging tree holes with a mini-excavator, picking up the trees and moving them around and then cleaning up the landscape debris and dumping it on the trucks,” Fox added.

A Bulldog Works With Cats

Fox's choice of equipment brand is Caterpillar; a small fleet with pieces from the 2008 product range through the 2015 range, which includes three 257Ds skid steers, a 304E mini-excavator and a 416D backhoe. Supplementing the fleet is an array of attachments ranging from a Rototiller and Eliminator Ripper Scarifier, which Clero uses with the skid steer to pick up trees and an auger with lengths from 6 to 36 inches — all ideal tools for Fox's landscaping work.

Clero leases and purchases its Caterpillar equipment from Gregory Poole, a relationship that began in 2005 when Fox leased a skid steer after a successful trial. His current sales representative is Marshall Bryant, who has serviced Clero Landscaping since 2007.

“Whenever we've had any problems, they come out right away to fix it and we're be back up and running quickly,” Fox said.

“The machines [Caterpillars] are extremely dependable,” he said. “They can get in tighter areas and smaller landscapes; they have more power and have the capacity to load and haul. It's certainly a lot easier to get around the jobsite than with a tractor and a front-end loader. It's more sensitive than a tractor with a loader you can pick up more. The buckets are interchangeable and the attachments easy to apply and use. We use the 304E mini-excavator and the 257D skid steer on every construction job — one ripping and digging out and the other loading. It's a fantastic combination.”

Clero Landscaping's business tends to operate within a 60-mile radius of the company's base in Oxford, NC., with most of the work taking place in areas such as Raleigh, Chapel Hill, Durham, Lake Gaston, Kerr Lake, Henderson, Burlington, Elon, Hillsborough and Mebane.

It's a philosophy that has earned his company high praise over its years in business. In 2001, the company was named the Grand Award Winner by the NC Landscape Association for a commercial landscape project.

“It was an old movie house in downtown Oxford, which we needed to make handicapped compliant,” Fox said. “It went from Main Street [level] down to the parking lot, which was about 100 feet in total, so we had to lay out the walls in stages going down from seven percent to two percent, then seven percent again to two percent. All in all, we did the brickwork and metal, wrought iron fencing, lighting and irrigation. Of course, we documented each stage of the project via camera for final submission.”

Fox will busy for the foreseeable future with a number of projects currently ongoing.

And while Fox has no plans to retire any time soon, he has begun the process of grooming a successor.

“My son, Tyler, who's 27, has been with the business since he was 15, so he's been learning the ropes and is responsible for getting products to the job sites,” he said.

Ultimately, Fox enjoys the landscaping business immensely and the work that Clero does.

“I've got good customers that trust me and we can fulfill their needs, so we've got a reputation of doing it right and I'd like to keep it that way,” he said.—CEG