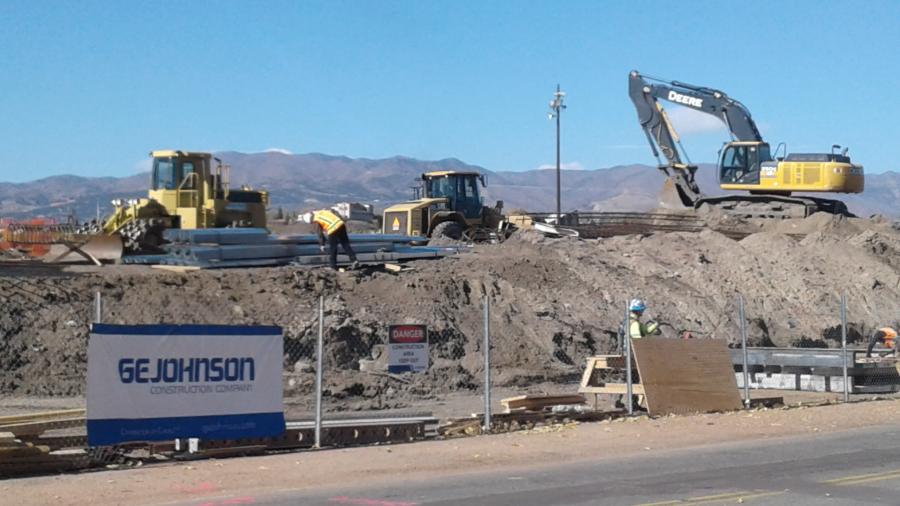 The most time-consuming part of the work will involve foundation and structure, which will take nine months. Exterior skin and interior finishes are expected to be completed in about 13 months, for an over-all 22-month schedule. (GE Johnson Construction Company photo)

Located more than 6,000 ft. above sea level at the foothills of Rocky Mountains' Pikes Peak, Colorado's $75 million U.S. Olympic Museum will create a gateway to downtown Colorado Springs when it opens in 2019. The three-story building will be the new home of the U.S. Olympic Hall of Fame, and will feature highly interactive exhibit space, a theater, gift shop, café and a simulated broadcast studio.

“The U.S. does not currently have an Olympic museum,” said Pam Shockley-Zalabak, interim CEO of the U.S. Olympic Museum. “We have amazing Olympians and Paralympians with incredible stories to tell. We need to celebrate their accomplishments and what the Olympic values and ideals mean for this country. The museum will serve the nation and will inspire generations of young people for the future.”

Officials hope the structure will serve as a premier cultural destination, attracting a wide variety of visitors.

“We want this to be one of the nation's most iconic museums, and having a world-renowned design and construction team helps make that happen,” said Shockley-Zalabak, who added that bringing the project to fruition was no small feat.

“It took leaders in our community and the state working with the United States Olympic Committee to understand the value of the vision. It took collaboration between the state of Colorado, the USOC and local Colorado Springs leaders to provide the leadership necessary to make the vision a reality and to fund that reality. It has taken donors from all over the country to make this happen.

“This is rewarding beyond measure. It celebrates the very best in ideals, values and people. It brings us together and inspires pride and hope.”

Shockley-Zalabak, the retired University of Colorado at Colorado Springs chancellor, said the time is right to construct the museum.

“The United States Olympic Museum is supported broadly and it will only add to the ability to tell the inspiring stories of so many athletes. We are using a motto of developing 'moments that matter' as a way of describing the experiences individuals will have in the museum. The 'why now' question is best answered because the support is here to make this happen now.”

By all accounts, feedback so far has been extremely encouraging.

Shockley-Zalabak said the idyllic location is a perfect fit for the new structure.

“The area has spectacular views, it's in the heart of the city and has excellent access to an interstate highway. It will serve as a gateway from America the Beautiful Park into Colorado Springs' downtown corridor.”

Among the museum's many features will be the highly anticipated Hall of Fame.

“It will be an inspiring place to honor the very best of those who have contributed most significantly to the Olympic Movement here in the United States. It will tell the incredible stories of men and women who have achieved greatness representing our country at the Olympic and Paralympic Games.”

For contractors involved in the actual construction, the project is not without its hurdles.

“One challenge is the complex shape of the building structure,” explained Tim Redfern, senior superintendent at GE Johnson Construction Company. “This building has 15 different finish floor elevations with connecting ramps to all, and much of the structural steel is at steep angles with large cantilevers. The complexity of the exterior skin is another challenge. Most all of the exterior surfaces are warped, and it's difficult to control location and quality of installation without 3D models and using cloud-scanning methods to verify exact placement and final location of the framing.”

The U.S. Olympic Museum will be situated just blocks away from the U.S. Olympic Committee headquarters. Just a few minutes from the museum site, the Colorado Springs Olympic Training Center will offer visitors a behind-the-scenes look into the daily lives and training regimens of Team USA.

Construction started in early May 2017. Currently, crews are installing foundation systems, basement floors with under slab electrical and plumbing and basement level structural steel. Over lot grading has already been completed, along with structural excavation and deep foundation systems such as drilled piers. Erection of the structure remains, as well as the installation of the exterior skin system, site work and installation of the exhibit package.

Redfern said building a structure of this caliber calls for rethinking every aspect of the typical construction process, with heavy focus on quality control.

“How we build, and when we build are unique, requiring our team to look for new solutions to previous tried-and-true solutions.”

Weather has already been an issue during construction, but crews remain optimistic.

“In July 2017, we had approximately six inches of rain, which is very unusual for this area. We struggled with that, but the weather has been good since then, and we are on schedule.”

The condition of the site prior to construction was level and clear. The project requires close collaboration with the city and adjacent railroad property, to ensure the project is in alignment. A pedestrian bridge is planned to span the railroad tracks and connect at the west side of construction, requiring both preparation and coordination.

The structural excavation required shoring to be installed along the south property line, due to the railroad property and close proximity to the tracks.

“This is accomplished by drilling holes and installing wide flange beams vertical down into bedrock and grouted. Once beams are installed, excavation proceeds down in five-foot lifts. As a lift is excavated, we install timber lagging onto the surface of the beams, which retains the soil behind. The excavation along this shoring is 22-feet deep.”

Roughly 45,000 cu. yds. of dirt/material will be moved on the project. Main equipment being used includes a large tracked excavator and front-end loaders, as well as a conventional 250-ton crawler crane. Concrete and structural steel are among the required materials.

The most time-consuming part of the work will involve foundation and structure, which will take nine months. Exterior skin and interior finishes are expected to be completed in about 13 months, for an overall 22-month schedule.

According to Benjamin Gilmartin, partner of architectural firm Diller Scofidio + Renfro, “The vision is to create a museum that celebrates the U.S. Olympics and tells the stories of U.S. Olympians and Paralympians. We strive to create a museum where the building and the exhibits become one, to give a universal and fully immersive experience to the visitor. The museum will anchor the new City for Champions district within Colorado Springs, and will be the catalyst for urban development. The client envisions the museum as the most accessible museum ever.

Gilmartin said telling the stories and feats of the Olympians and Paralympians has been the biggest challenge for the creative team, along with capturing the energy and dynamism of the athletes.

“Having met with Olympians and Paralympians during the design process, we are awestruck by their dedication and abilities, and we strive to capture some of their grace and energy within the building form.”

The building, which tiers down across multiple levels, is contemporary in style. The project is 60,000 sq. ft., with an exhibit space of 20,000 sq. ft.

“The dynamic building form is inspired by the energy and grace of Olympians in motion,” said Gilmartin. “The galleries are organized as a series of petals that grow in a spiral out of the central atrium space. The visitor's experience through the gallery is guided by a subtle diagonal clerestory light that terminates in a view of the surrounding city at the terminus of each gallery. Between galleries, the visitor is then drawn into balconies overlooking the central atrium. The circulation of looking out and pulling in sets up a rhythm and pace for a visitor that allows for varying speeds and interaction with the exhibits.”

The design is intended to showcase the experiences of both Olympic and Paralympic athletes.

“Visitors enter into the light-filled central atrium and then journey to the top of the building in an elevator, so that all visitors, both able bodied and those with disabilities, travel together to the top, where they start the journey of an Olympic or Paralympic athlete. The exhibits are set along cascading platforms that spiral around the atrium and are connected with a series of ramps.

“The journey starts with an introduction to the Olympic and Paralympic Movements, then covers the Journey to Excellence; athlete training; the Parade of Nations; Summer and Winter Games; World Matches; a changing gallery; the Medals Ceremony; and ends with films of the greatest Olympic and Paralympic moments in history, and the Hall of Fame. One of the most dramatic experiences is the Parade of Nations, where visitors will feel the roaring excitement and energy of walking into the stadium during the opening ceremony.”

“During the design process, we carefully considered integrating and promoting pedestrian and bicycle transportation. We selected local materials with low VOC content. To reduce energy consumption, we are employing an energy-efficient HVAC system and creating a well-insulated building enclosure. The landscape and outdoor gardens utilize low-maintenance native plantings.”

For Gilmartin and others involved in the project, helping design the new museum is extremely satisfying.

“Knowing that the museum will be the anchor for a downtown renewal is very rewarding. More important, however, it's an honor to be part of a project that tells such inspiring stories and that will inspire the athletes in all of us to be faster, higher and stronger.”

Jamie Fabos, chief communications officer, city of Colorado Springs, said because the museum will be the only one of its kind in the nation, it will make Colorado Springs the premier destination for Olympic fans across the globe.

“Along with the presence of 23 Olympic governing bodies, the headquarters of the U.S. Olympic Committee and U.S. Paralympics, as well as the flagship Olympic Training Center, the museum will be the crown jewel of Colorado Springs, Olympic City USA.”

A pre-construction feasibility study indicated roughly 350,000 visitors will travel to the city to tour the museum annually, and 80 percent will be from out of state. Officials expect the city's profile to rise with the opening of the Olympic museum nationally, but especially among international travelers.

“The museum is being built in southwest downtown, an area that has been designated as an urban renewal area, and a priority for the city,” said Fabos. “Development has already begun on residential, parking, dining and accommodation establishments in the area surrounding the museum site.”

She added, “It's been fascinating to see the enthusiasm of the community translate into actual brick and mortar development. By the number of cranes currently visible in Colorado Springs, there's tangible evidence this community wholeheartedly embraces the museum, and is actively preparing for its opening.”