“When employees are happy, they're successful, and so are we,” said Blagg. 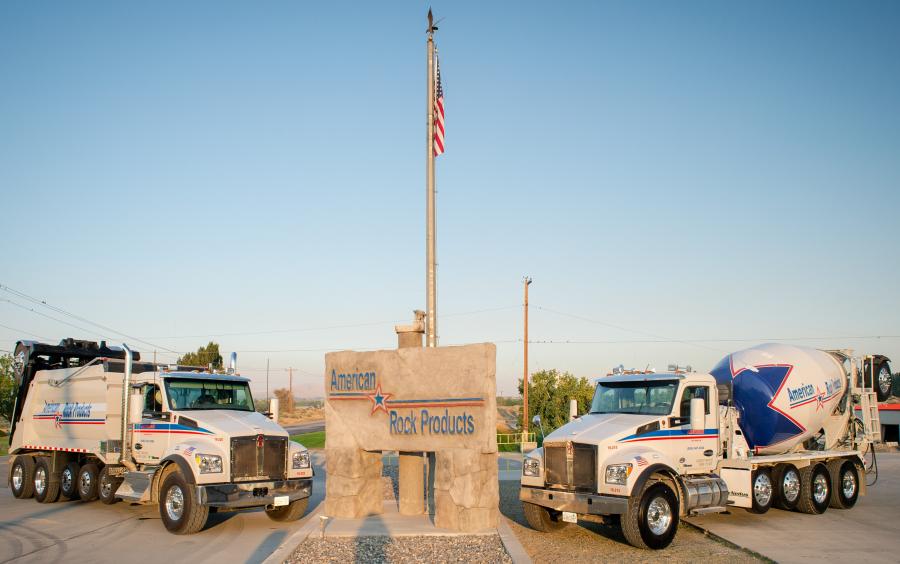 With a fleet of 92 trucks, mostly Kenworths, American Rock was an early adopter of the new Kenworth T880S with set-forward forward axle. Now the company operates four T880S mixers with McNeilus drums, and one T880S Super Dump.

American Rock Products is a premier provider of aggregate and redi-mix concrete products in the Columbia Basin region of the Pacific Northwest. Founded in 2001, this subsidiary of Eucon Corp. now operates concrete plants in Richland, Pasco, Kennewick, Walla Walla, and Prosser, Wash., and in Hermiston and Boardman, Ore., as well as a portable batch plant.

No job is too big or too small for American Rock — from 50,000 yds. of concrete highway jobs, commercial industrial jobs, dam projects for the U.S. Army Corps of Engineers, to 2 yds. of concrete for sidewalk repairs in someone's front yard. Between these extremes, the company pours endless yards of concrete for buildings, schools and home foundations.

With a fleet of 92 trucks, mostly Kenworths, American Rock was an early adopter of the new Kenworth T880S with set-forward forward axle. Now the company operates four T880S mixers with McNeilus drums, and one T880S Super Dump.

“Drivers love the T880S,” said Wade Blagg, fleet maintenance manager at American Rock. “The driveability, ride, vision and operator comfort are awesome. I'd have a war on my hands if I tried to pull drivers out of those trucks.”

With daily deliveries to a broad customer base, most loads are within 25 miles of an American Rock plant. In more remote regions of its northern Oregon market, trucks might travel as far as 60 or 70 miles.

“We run all PACCAR MX-13 engines,” said Blagg. “For the last three years, I have only ordered PACCAR engines because we've had really good luck with them. They save us weight and money on both our mixers and super dumps.”

Specialized mixer trucks are intended to run for many years, so there's a lot to think about before buying new trucks, said Blagg.

“Kenworth builds the most maintenance friendly and durable trucks we can find. The support we get from Kenworth Northwest - Pasco is terrific. Without good support, I don't care what kind of equipment we're talking about, it's not worth a darn.”

American Rock orders new mixer trucks through McNeilus “because they really know what they're doing,” said Blagg. “They work closely with Kenworth to set up the mixer correctly. Because we order so many of them, you of can't beat the price, quality, durability and support. That's why I choose to go with Kenworth.”

“With the right horsepower, torque and correct gearing, the truck doesn't have to work as hard and that means a little better fuel mileage, too,” said Blagg.

“There's more headroom, visibility is better and the T880S rides great,” said Hardin. “I'm not a small guy, so the extra roominess inside the cab makes a big difference for me. Along with the clutch assist on the 9-speed Eaton transmission, it's easier to push in, so there's less fatigue at the end of the day.”

With a quality truck like the T880S, drivers tend to appreciate their equipment more and take better care of it, Blagg said.

“When employees are happy, they're successful, and so are we.”