ConExpo-Con/AGG to Be Held Again Soon

An important announcement has come out after this year's ConExpo-Con/AGG proved to be such a huge success. 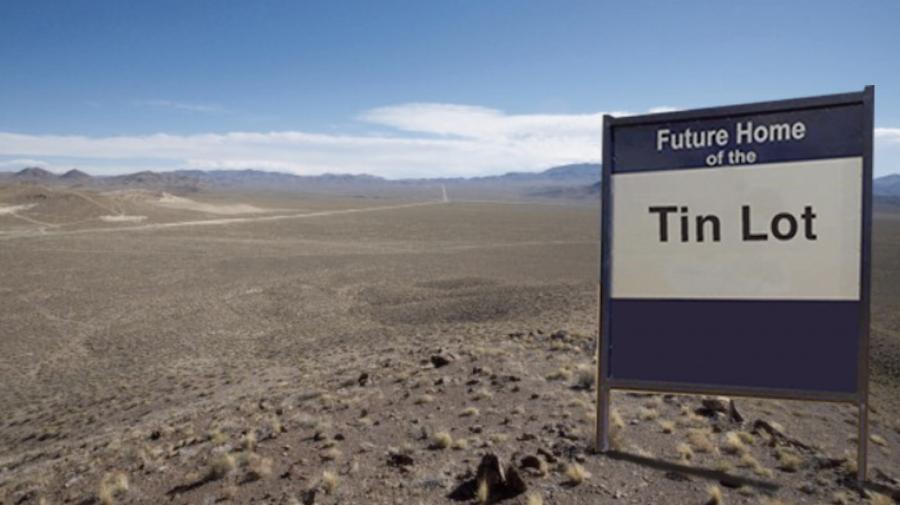 The Tin Lot will include canvas tent lodging and a "Midnight Madness" buffet.

On the heels of another hugely successful ConExpo-Con/AGG three weeks ago in Las Vegas, the Association of Equipment Manufacturers (AEM) appears poised to make the show an even more all-consuming part of the collective lives of people in the industry.

An AEM source, who asked not to be named, told CEG that beginning in 2018 ConExpo will be held two times a year — a major break from the show's longtime tradition of being held only once every three years.

“The thinking is that anything good should be done a lot,” said the source. “And we're thinking people would love to come to ConExpo as much as possible.”

The source went on to say that the preliminary catch-phrase AEM is considering using to promote the soon-to-be semi-annual show is “What happens in Vegas, stays in Vegas — and so will you.”

The venerable association also appears to be broadening the show's reach to not only address emerging technologies in the industry, new equipment and services and workforce development, but also to tackle health issues, such as the ongoing obesity problem in the United States. In addition to its popular navigational map app, another new app currently in the works will track how many minutes a given attendee has added to his or her life by simply walking from the Gold Lot to the South Hall, for example, taking into consideration whether that walk was accompanied by a beer or included a stop at one of the food vendors along the way, which may subtract minutes.

Naturally, logistics for a show this big and this frequent will need to be seriously considered, according to the source.

“We understand that setting up for a show of this scale is a lot of work, so we're working with the Las Vegas Convention Center to see if they will allow us to just keep the equipment there or off to the side someplace,” the source said. “We also know that ConExpo is the only place on earth where the line to the men's room is as long as the line to the women's room, so we're working on a partnership with the maker of those incontinence undergarments. When you pick up your badge, you'll receive several of those, chapstick and pain relievers.”

The crushing disappointment known as the afternoon line to the Monorail to leave ConExpo also will be addressed.

New to future ConExpos will be the Tin Lot where a sort-of makeshift community housing area will be constructed.

“We want to make ConExpo more of a lifestyle than an experience,” said the source. “That's why we're making it easier for you to just stay at the show. Sure, you can check out any time you'd like, but you should never leave.”

AEM also intends to make ConExpo a sort-of South by Southwest festival (also known as SXSW) by booking even more popular music acts. The most recent ConExpo featured a performance by Foreigner and plans are in the works to book more themed acts to perform at various manufacturers' booths. The popular '80s ballad band, Air Supply, will play in proximity to compressor manufacturers; Nickelback will perform near aggregate producers; GWAR will be performing randomly anywhere near big iron; and Lynyrd Skynyrd Featuring No Original Members will play near antique construction displays.

To get ready for the more regularly occurring ConExpos, AEM is encouraging contractors to get their projects done as soon as possible, manufacturers to begin engineering new models twice a year, marketing professionals to immediately begin planning new booth and USB drive themes, and construction media to start working on their press conference and booth visit schedules, making sure to leave time open between noon and 1 p.m. to partake in the complimentary lunch in the Media Room.

New technology will remain a hallmark of the iconic construction show, said the source.

At the first 2018 show, an AI 3D-printed excavator will be unveiled and at the second show, it will have speaking ability, scolding you when you've set the bucket down too hard. In early 2019, plans are for it to betray you and start its own contracting business.

Despite ConExpo already being a completely exhausting five days of your life, AEM is confident people in the industry will adjust to and embrace the much more frequently occurring shows.

“Just wear comfortable shoes and take a couple of Benadryls at night while you're holed up in the Tin Lot,” said the source. “Oh and one other thing to consider before you mark your calendars to attend ConExpo twice a year. Remember all that talk about fake news? Well, so is this. Have a great and fun April Fools' Day!”